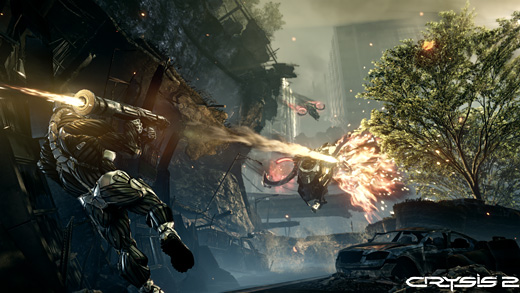 Still putting time in with Crysis 2. I've got to say, it's pretty damned entertaining.

The high point for me (so far) is the super-suit's ability to switch back and forth between its two main functions: armor and stealth. This in itself wouldn't normally be enough to sell me on an FPS, but those abilities combined with the semi-open level design really creates a sort of on-the-fly dynamic that I haven't seen very much of lately. In fact, it may sound a little bit insane, but there have definitely been moments when Crysis 2 has reminded me a little of one of my favorite series, Hitman.

Comparing the super-suit to a cloned assassin might not make much sense at first, but when given the freedom to choose between sneaking across rooftops or mounting a full-frontal assault, or between slipping past a group of guards or sniping them one by one (or hell, just launching a rocket right into their midst) that same feeling of using each environment the way I want to is something that few games have attempted and even fewer have gotten right.

It's definitely not total open-world (although I think there is some potential for something along those lines) but there's enough freedom in the game so far to keep me quite satisfied.

Started Season Two of Being Human (UK) and it's still fantastic. While I certainly admit the premise of a ghost, vampire and werewolf being roommates sounds pretty ridiculous, it's actually awesome. The writers do a fantastic job of fleshing out the characters, and each episode is just captivating.

Two thumbs up so far, and if you haven't given it a shot yet (and you're open to Urban Fantasy, of course)  it comes totally recommended.

It's time once again to clear out my Inbox, so prepare yourself for an avalanche of links…

For the Monster Hunter-curious, here is a video of my quest buddy @Gelles22 (using Longsword) taking on a Rathian in Monster Hunter Tri's arena mode. This particular video is a little different from the norm in that most battles happen in wilderness areas, but it gives a good sense of what the King-sized combat is like.

This thing has been all over the Internet for a week or so, but just on the slim chance that you haven't seen it yet, it's Kid Zangief putting the smack down on a bully who should really know better. Seriously, watching this video just never gets old, and the Street Fighter sound effects are just icing on the cake.

Game Informer is hosting a gameplay trailer of the upcoming Batman game, and it looks fantastic. Rocksteady did a superb job with the first, and if these images are any indication, they are going to knock it out of the park once again.

Hot Blooded Gaming has an interview with quadriplegic petitioner Chuck Bittner from the recent PAX East convention. The man is crusading for developers to include custom button remapping in their titles to help players with disabilities, or just for those players who like to change things up to suit their own preferences. This is a great mission he's on and Chuck is a well-spoken, enthusiastic guy. See what he has to say right here.

My Doctor Who sensei @Strident was kind enough to pass along this link to a short micro-episode created for a charity drive in the UK. Called "Time", it's about the TARDIS landing inside itself and creating a space-time loop… Hijinks ensue.

(mini-spoiler: I find it telling that when Amy Pond meets her future self, the first thing she wants to do is get inside her own pants.)

“(mini-spoiler: I find it telling that when Amy Pond meets her future self, the first thing she wants to do is get inside her own pants.)”

Absolute and final proof, that a comment like this can be made about Dr.Who, proves the show really isn’t Dr Who at all….just popularist bullsh*t that’s stolen a premise.