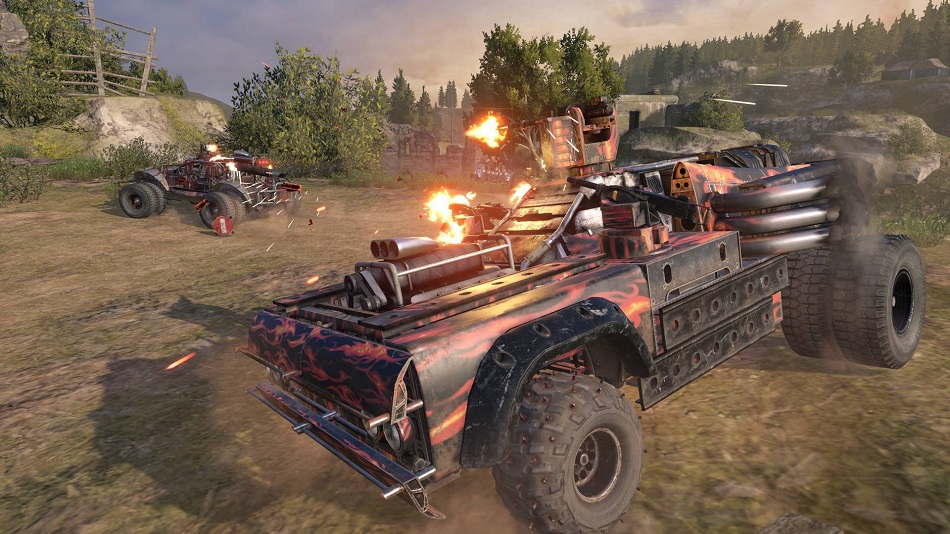 HIGH The car-crafting is robust and wildly entertaining.

LOW It takes way too long to earn parts and make progress.

WTF The default controls are unbelievably awful. Change them ASAP.

I know that when the words “Free-To-Play” come up, a lot of people have an allergic reaction, and they’re not entirely wrong for feeling that way. There are an infinite number of games designed solely to elicit purchases from people with no real effort put towards providing an honest or creative gameplay experience.

Those types of titles are easily spotted, ignored and written off, but the real tragedies of the F2P scene are projects that could actually be great, only to fall prey to the temptation of microtransactions. While it manages to deliver some good times in the early hours, I’m afraid to say that Crossout falls into this latter category.

Set in a generic post-apocalyptic land, Crossout is a straightforward car combat game taking place in a variety of arenas. There are several modes, both versus and cooperative, but they all boil down to more or less the same thing – players shoot enemy cars and destroy or disable them without their own vehicle getting toasted.

As described, Crossout is pretty straightforward, but the hook that makes it worth a peek is that it has a surprisingly robust vehicle construction engine bolstering the ho-hum gameplay.

Every vehicle can be broken down into component parts and reassembled in nearly any configuration that a person can imagine, as long as the parts are available. Besides the requirement to have a “frame” to build on and a cab which produces energy, anything goes. 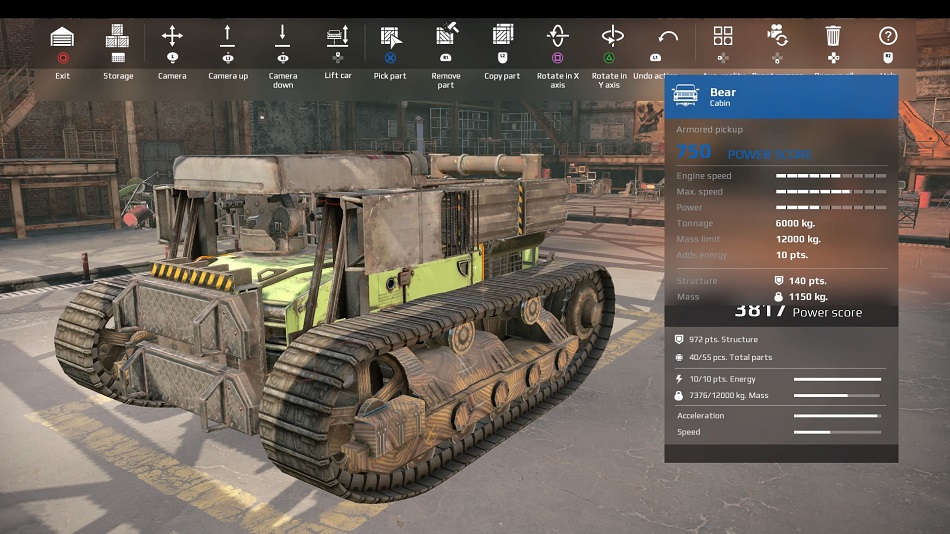 Want to make a double-hulled land cruiser? No problem. A hefty tank with huge cannons? Easy. A light craft capable of flying huge distances and launching missiles? As long as there’s a nearby takeoff ramp, can do. I really can’t overstate how fantastic it is to be able to bolt parts together and drive any crazy thing I could come up with. There are loads of different parts, too… It’s possible to see what other players have created in a shared ‘test-drive’ mode, and there is some wild stuff in there.

The interface for actually assembling vehicles is praiseworthy. While I admit that I was initially overwhelmed when set loose in my garage, it was only a short while before I figured out what was what and I marveled at how ultimately sensible it was. After turning on the text explainers for each button and spending time testing things out, I was quite impressed with what the devs have designed here.

While I want to recommend Crossout based on this car customization alone, this is also where the game falls down, tripping hard over its free-to-play structure. Like most games of this type, it’s technically possible to play the game and be successful without spending real-world money, but in practice, that proves to be fairly untenable.

In order to get more parts to work with, the player has to grind through an insane number of missions for components and in-game currency which can be used to buy or create parts. It’s a lot of playing the same missions over and over and over again for very little gain, and this tight-fistedness is made worse by the fact that players on a losing team earn even less than the winners. Of course, this is easily rectified by spending real dollars and buying anything that appeals in the online shop, but that will come as a surprise to absolutely no one.

The end result of Crossout’s F2P approach is that players who don’t have good parts will inevitably lose to those who’ve ponied up, or those who’ve spent days and days grinding. The rich will get richer because they’ll win more often, and those who want to keep up will have to devote a ton of time or open up their wallets. Although I haven’t done any hard calculations (and of course, a lot depends on a person’s win/lose ratio) making progress in Crossout seems like a full-time job that I don’t want to apply for.

Unfortunately, there’s not much to Crossout besides basic car combat and one humdinger of a car-making mode. A single-player campaign with some easy-to-get rewards would have been quite welcome, as would some personality enhancing its generic post-apocalyptic style, but it is what it is, and I got out early. Crossout has the beginnings of being an amazing game, but it’s just one more example of free-to-play design souring something that should have been sweet. Rating: 5 out of 10

Disclosures: This game is developed by Targem Games and published by Choice Provisions. It is currently available on PS4, XBO and PC. The game is free to download, but the reviewer was given a code for in-game currency and free items via publisher. This game was reviewed on PS4. Approximately 8 hours of play were devoted to the single-player mode, and the game was not completed because there’s no real ending to it – it’s a F2P endless title.  All 8 hours of play were spent in online multiplayer modes.

Parents: According to the ESRB, this game is rated T and contains Violence.  There are no humans depicted during gameplay, it’s all cars shooting other cars. No blood, no gore. It’s safe for any kid who can steer a vehicle.

Deaf & Hard of Hearing Gamers: There is no dialogue in this game and no audio cues are necessary for play – the on-screen radar shares all the info that’s necessary. It’s fully accessible.

Remappable Controls: Certain functions are remappable. Most of the buttons can be swapped around and some of the preset configurations can give a more standard steer/brake setup.

I spent $1000 on the game to only be harassed by a developer / super moderator being called a pay to win a piece of **** The moderators put out comments saying 90% of its American player base is cry babies and worthless. The company responds and said it was ok because it was just an opinion of the moderator and not that of the company but was posted on their forum in response to the developer. They respond to my review of the game “Regarding the unfortunate comments made by Beta Angel – he’s a born and bred American,… Read more »

Thank you for acknowledging the level of grind involved- I’m one of those who strictly refuses to shell out anything for a “F2P” game, and while I think both the ideas and gameplay of WT:GF and Crossout are fun, you put it best with “making progress seems like a full-time job that I don’t want to apply for”. Games, while too short, also suffer from severe “steamroll-or-be-steamrolled”, in which the former ends up being simply a relief from the latter… however, both are symptoms of broken matchmaking system, and having a long streak of being assigned to the “losing team”… Read more »