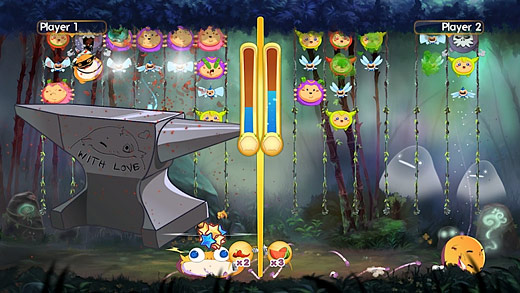 LOW The difficulty of the final third feels haphazard and unrefined.

It's unfortunate that Critter Crunch has the title it does. It sounds painfully generic and one could hardly be blamed for passing it over while perusing the PlayStation Store. The name… it just lacks pizazz. That said, I'm happy to report that although it might benefit from a new handle, the gameplay behind the lukewarm moniker is more than enough to make up for any initial impressions of blandness.

In an interesting twist on the puzzle genre, Critter Crunch revolves around living creatures instead of oddly-shaped blocks or gemstones of various colors.  At the bottom of the screen is Biggs, the player's creature. This adorable orange furball has an impossibly long tongue that can snatch and rearrange different species of animals that appear at the top and advance slowly towards the bottom.

As expected, the player needs to make matches to keep the action under control, but instead of aligning three or filling lines, Biggs must feed the correct species to its predator in order to make it burst with fullness and vanish. The dynamic asks the player to look at the screen in an interestingly new way (while always remaining on the lookout for "food chain" combos) but remains instantly accessible and easy to understand.

Supporting the clarity of the concept, Capybara has done a great job constantly introducing new mechanics at a manageable pace, ensuring that the player never feels overwhelmed or confused. At the same time, variety elements like bombs, blockers, toxics, extinctors and wild card creatures add a welcome layer of complexity to the proceedings. The game begins simply enough, but it doesn't take long before even veteran puzzleheads will find themselves fully engrossed in snatching and spitting creatures at a furious pace.

That said, I felt the final third or so of the game began losing some of its elegance in favor of sheer volume. Eight rows across and several variations of species at once felt like too much to reasonably deal with consistently unless some of the more destructive critters (randomly) appeared. Without enough of those screen-clearing beasts, trying to deal with the onslaught was a lost cause. In this stage of the game, play felt more haphazard than orchestrated… never a best-case scenario.

Frustrations aside, Critter Crunch sports superb, fluidly cartoon-like graphics, and Puzzle, Survival and Challenge modes on top of the regular Story stages. There's also a multiplayer mode (both co-op and vs.) for some double-tongue maneuvers. Although appearances may be deceiving, don't judge too soon—Critter Crunch is a high-quality addition to the PSN library, and a must for PS3 puzzle fans with an internet connection. Just be ready to grit your teeth a bit towards the end. Rating: 7.5 out of 10.

Disclosures: This game was obtained via publisher and reviewed on the PS3. Approximately six hours of play were devoted to the single-player mode, and the game was completed. No time was spent in multiplayer modes.

Parents: There's nothing at all to be concerned about here. Bright, colorful, and eminently safe, feel free to let your kids learn the ins and outs of predatory puzzling.

Deaf & Hard of Hearing Gamers: You will have no problems. There are no important auditory cues, and all action is right on screen. Totally accessible.

This game is SO CUTE–glad to hear it is fun, too, I just may pick it up. A PSP version would be super great.