The UPS man arrived at my place today bearing my now-repaired 360. Of course, no one was home as he was knocking on the door, so all that was here was one of those brown and yellow notices taunting me. With any luck, someone will be here to receive it tomorrow.

I have to admit that the Microsoft service Center has definitely sped up their turnaround time and I'm grateful for that, but I'd still rather that the console hadn't broken in the first place.

My friend Chris Vandergaag over at Sidemission has posted a video review of NFS: Shift, and although I generally don't give a rip about racing games, I found it to be well-produced and entertaining. It's sort of NSFW but give it a look-see if you're in the mood for a chuckle or two at the expense of racing game fans.

Play-wise, I spent a good hour or two with Critter Crunch on the PS3. An animal-themed puzzler, it's got beautiful graphics and really solid design. Having a great time with it so far, and I'm also working on a review as we speak.

My piece won't go live for a while, but I feel very confident in saying that it's one of the better games available on PSN. You really can't go wrong with this one, unless you're some kind of insane puzzle hater.

Had plans to get an hour or two in with Half-Minute Hero today, but was totally defeated by some expected circumstances. Ended up carrying the PSP around with me all day, and didn't turn it on for even a minute.

That said, I did play it for a brief snatch last night in bed and I was absolutely loving what I saw. (Beat it twice!) I'll definitely have more impressions and a formal review of this title later on, but I was quite pleased with the few minutes I got in. 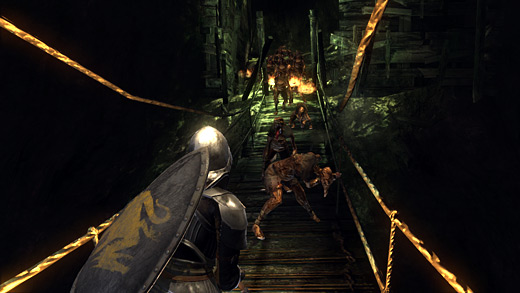 One last note: I'm almost done with my start-over-from-scratch replay of Demon's Souls, and after taking a very close look at the Tendency system, I'm basically convinced that it's pretty much the only false step that From made.

The first time I played the game, I went through it without consulting any FAQs and just immersed myself in the overall experience. It was extremely rewarding and I'm glad I did it that way, but I was a little put off after credits rolled to find that I had missed several things because my gameplay style kept me "in the middle".

Without getting into too much detail, certain characters and events only become available after a world goes either "Pure White" or "Pure Black". The only problem is that the system as it stands basically keeps all of these extra elements hidden unless a player knows exactly what they're doing and kind of "works" the system to gain access.

In my opinion, this mechanic totally destroys the level of immersion that is so attractive about the game and reduces the atmospheric adventure to a series of jump-through-hoops exercises for players who want to see the extra content. Of course, it has to be said that this content is just that—extra, but it still feels like a missed opportunity to me.

Writing my review, I was really debating whether or not to give the game a perfect score, and I ended up holding back a half-point based on what I knew of Tendency at the time as well as a few other niggling little things. Now that all secrets have been revealed, I'm glad that I did. Don't get me wrong, Demon’s Souls is still my front-runner for Game of Year… it's just a little disappointing that some pretty cool things that would have enhanced the adventure were hidden away behind what I see as a fairly unintuitive and unnatural system.