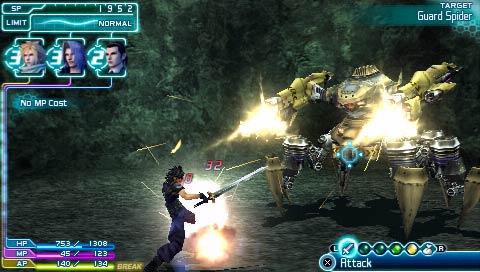 Parents don't have a lot to worry about. This is typically androgynous, spiky-haired emo RPG stuff, complete with gigantic monsters and flashy magic spells. If you don't let your kids play the usual sword & sorcery stuff, then steer them clear. Otherwise, there's nothing particularly harmful or explicit to be seen.

FF7 nuts already own this, so there's no need for me to even say anything here.

PSP owners should avoid the game, unless they fall into the previous category. Combat is unpleasantly simplistic, and the game's DMW system takes control out of the hands of the player, with poor result. It may look like a knockout, but don't be fooled… there's not a lot under the hood.

Deaf and Hard of Hearing gamers shouldn't have any problems. Dialogue is subtitled, and there are no auditory cues necessary during gameplay. I played with the sound completely off for several long stretches (don't tell my boss) and had no problems whatsoever.

Massive content including over 300 missions ontop of the story line make this better than all other psp games!

People both fans and non fans of Final Fantasy have played this game and they all love it!!!

The simplistic battle system makes the game easier to use and exciting to play. There are hundreds of different spells and upgrade materia which you can use to enhance and customise your experience of the game and the story is put together very well, making this one of the best psp games i have ever played.