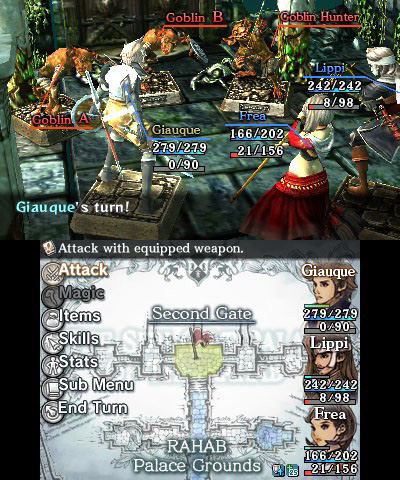 WTF Why would anyone award a required item randomly?

Crimson Shroud is a new download-only turn-based RPG created by famed developer Yasumi Matsuno, best known for his work on the cult classic Vagrant Story, and the wildly overrated Final Fantasy Tactics. This small-scale title is a fairly typical Japanese role-playing game (JRPG) at heart, but it's been molded in the shape of a tabletop/pen & paper game resembling something along the lines of Dungeons & Dragons.

Upon starting, the player takes control of three characters represented by painted miniatures on a 3D playfield, and enemies appear as though placed by an invisible hand from above. The narration is written to sound like it's being read aloud by a Dungeon Master, and many choices that pop up rely on a roll of virtual dice.

As someone who's played D&D in the past and has every intention of spending more time with tabletop in the future, I found the basic conceit of Crimson Shroud to be charming and clever. It doesn't keep too strictly to its motif (I think it could go a little further, honestly) but it's fresh and different, and it clicked with me. Unfortunately, the rest of the game needs a lot of work.

While I stated earlier that Crimson Shroud is essentially a typical JRPG—characters take turns attacking, healing, casting magic spells, and so on—there are a few extra layers thrown in which don't serve much purpose other than to complicate things. For example, there's a "skills" menu which lists abilities apart from traditional magic spells. Most of these are buffs and debuffs of one sort or another, and the game hinges on their use. Personally, I found it a little annoying to have to constantly twiddle with the statuses of my characters, and it was inconvenient that enemies don't display theirs at a glance. 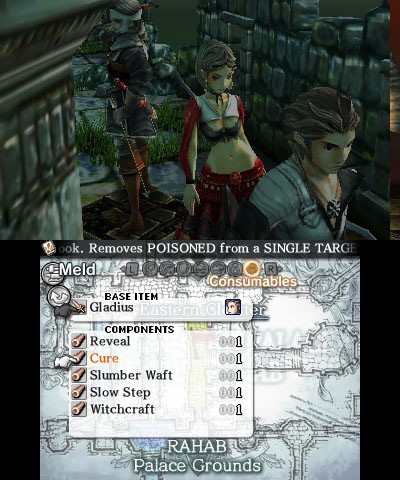 Another problem I encountered was that the user interface needs tweaking. It's not very quick or easy to compare the stats of equipment, and there are magic spells attached to certain pieces of armor, weapons, and rings that are difficult to parse through. The views of the battlefields are cramped and cluttered, and as someone who has painted miniatures in the past, it was a strange omission to be unable to rotate the camera to look at the heroes and creatures.

While the elements I've mentioned so far are a bit rough, they were serviceable enough. If these were my only complaints, Crimson Shroud would have likely ended up reviewed as a decent download to kill some time with. Unfortunately, the developers managed to trip up on a thermonuclear level just as I was getting comfortable with its layers of systems and various eccentricities.

Upon reaching the second area, I was stopped dead in my tracks by the lack of a key item required to proceed. I knew I needed something to move past a certain room, but the game gives absolutely no clue as to what it is, where it is, or how to get it. With nothing to go on, I found myself spinning in circles without direction. I simply could not move forward.

Later on, thanks to some info from fellow reviewers, I discovered that the thing I needed was a random drop earned by defeating one particular group of enemies. I could hardly believe it. Secretly hiding a key item as a random drop rather than giving it to the player at the appropriate time is an incredibly poor design choice. In fact, things come to such a complete halt that if I hadn't been told what the true situation was, I would've assumed the game was glitched or broken.

I played Crimson Shroud for a total of 6.5 hours before I got frustrated and gave up because five hours of that playtime was spent fighting the same group of enemies over and over for the random drop which never appeared. Holding back rare weapons or magic items is one thing, but it's incredibly disrespectful of a player's time and a waste of a consumer's money to make forward progress reliant on pure luck.

All told, I got about an hour and a half of semi-decent gameplay for my eight dollar purchase before getting trapped in a never-ending grind. Given the arbitrary, semi-broken way that Level 5 walled off the rest of the content in Crimson Shroud, I honestly feel as though they owe me a refund. Rating: 2.5 out of 10.


Disclosures: This game was obtained via paid download and reviewed on the 3DS. Approximately six and a half hours of play were devoted to the single-player mode, and the game was not completed. There are no multiplayer modes.

Parents: According to the ESRB, this game contains blood, suggestive themes and violence. I didn't witness any concerning content part from a little bit of brusque language here and there, but the tone of the game is clearly aimed at older players. That said, I find the claim of "violence" to be a little humorous since characters in the game are immobile figurines.

Deaf & Hard of Hearing: Dialogue is delivered via text, and due to the methodical, turn-based nature of the game, no audio cues are relevant to play. It's fully accessible.

I’m surprised you had such trouble with the drop. I think how to get it was probably explained poorly (it only drops off of skeleton mages, so you have to kill the archers in the back to improve their chance of spawning), because I’ve played through twice and never had to do more than two or three battles to get one. The completely unforecasted need for a random drop is mega-lame. Maybe in a game not made by Matsuno I might actually care, but here I enjoyed it so much overall that it didn’t bother me as much as it… Read more »