Check Behind Everything Eight Times 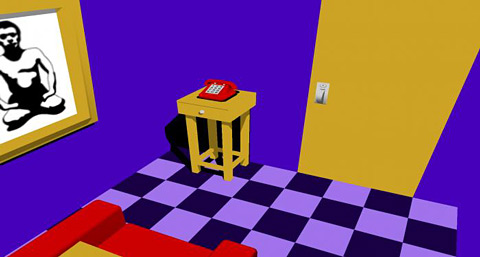 WTF It's either impossible, or over in ten minutes—there's no in-between.

Although I had never heard of it before seeing it available in the PlayStation online store, the original Crimson Room is evidently well-known (and apparently well-regarded) in Flash game circles. If that's indeed the case, I can certainly see how it might make a name for itself. If nothing else, it's original, mentally stimulating, and has a great aesthetic. On the other hand… it's a pretty rotten game.

A repackaged remake expanding on source material that's readily available (and free on the internet) Crimson Room: Reverse's premise is that the player finds themselves trapped in a single room. Controlling a cursor that can click on items to search and investigate, it's up to the player to scan the environment for helpful objects and figure out how to use them. The ultimate goal is, of course, unlocking an exit door and earning freedom. Open door, game over.

If you ask me, this premise is pure gold. Something about the idea of having one single room as the entire environment captured my attention almost immediately—it's not something that has been attempted on consoles or handhelds before (to my knowledge) and I'm always up for games that try something new. However, there are some serious flaws in the design that prevent the game's four rooms (and four alternate versions exclusive to the PlayStation Portable) from being the tasty, puzzlicious morsels they should be.

Primarily, I don't believe that challenge or difficulty should be delivered by way of tricking or deceiving the player, especially in terms of simple navigation. Since each room is just a room, it seems as though looking around such a small space should be a piece of cake—but that's hardly the case. Key items are often hidden behind other items, and the player has no way of knowing these areas exist or that it's possible to search there unless the cursor falls in a very specific location, sometimes a "hot spot" as small as a few pixels. In the very first level I found myself hopelessly stuck and running to the Internet for an FAQ, only to find that my problem wasn't that I didn't know what to do, but that I simply hadn't clicked in exactly the right place. Sadly, that was far from the only time.

I'm also a big believer in the idea that a game should provide the player everything they need to solve any challenge they come across. There should be a discernible logic; methods to what might initially seem like madness. Without spoiling anything, a few of the "challenges" are so completely out-of-the-blue and require such unreasonable intuitive leaps that I have a hard time imagining many players completing any of these rooms assistance-free. Such obtuse difficulty is something of a sin for games in general, and doubly so for a portable title. What value is there in totally stumping a player in a car or on a plane and unable to jump online for an FAQ? I understand the need to make the puzzles a little tougher than what the average player might be used to since the rooms are so small, but Reverse is an exercise in aggressive obstruction.

Although it can be an incredibly vexing, frustrating play due to the issues I mentioned, at the same time I can't deny that there was something seductive about Reverse. Despite feeling cheated multiple times, I kept coming back for more and couldn't get the title out of my head until I had been through everything it had to offer. If nothing else, it certainly has an identity all its own in relation to the rest of the PSP library, and is not a title likely to be forgotten soon by anyone who tries it.

Although I would argue that it is critically flawed in several areas, its perverse nature will definitely appeal to certain kinds of players—just make damn sure that it's not the only game being relied on to provide entertainment during flights or road trips. It's either over in ten minutes or completely impossible, and neither of those makes for a good take-along. Rating: 3.5 out of 10.

Disclosures: This game was obtained via paid download and reviewed on the PSP. Approximately two hours of play were devoted to the single-player mode, and the game was completed—thank God for FAQs. There are no multiplayer modes.

Parents: According to the ESRB, this game contains drug references and violence. Despite that, parents really don't have much to worry about… although to be perfectly frank, I can't see any young child having even a faint interest in this title. It's incredibly difficult, and I can't see anything appealing to little ones, but if for some bizarre reason a child does play it, there's not much here to be concerned about except for a few spooky sound effects that might creep them out.

Deaf & Hard of Hearing: You shouldn't have any problems for the majority of the game, although there are two levels (both Blue Chamber areas) that rely on sound cues to inform the player that progress has been made. There are no visual representations of these sounds, so it might take a little bit of trial and error for a player with a hearing impairment to figure out something actually happened. That said, I imagine 99% of people playing this game will be looking at an FAQ at some point regardless of whether they can hear or not, so it's not a major issue.

True there are lots of these escape-from-the-room games on the internet, but I use my PSP handheld a lot so this was worthwhile for me.
I think the game is impossible to beat without help, thats my primary complaint. I had to google some walk-throughs and videos, then took notes, and then – quite frankly I had a lot of fun with Crimson Room, particularly the green room and the skeleton (I think it was the green room), and I still have several rooms yet to beat so, a fun edition to my library.

There’s millions of games just like this online, from the original Crimson Room creator and many knockoffs. Many of them are excellent timewasters – great things to pick up randomly and get sucked into for a quick burst of brainfuckery.

With the sort of casual, random fun sort of gameplay and the ridiculous amount of them freely available online, I can’t really fathom actually paying money for this one here. I’d honestly feel better just donating money to the original creator for all the games he’s already made.