Highly polished… and hard to find 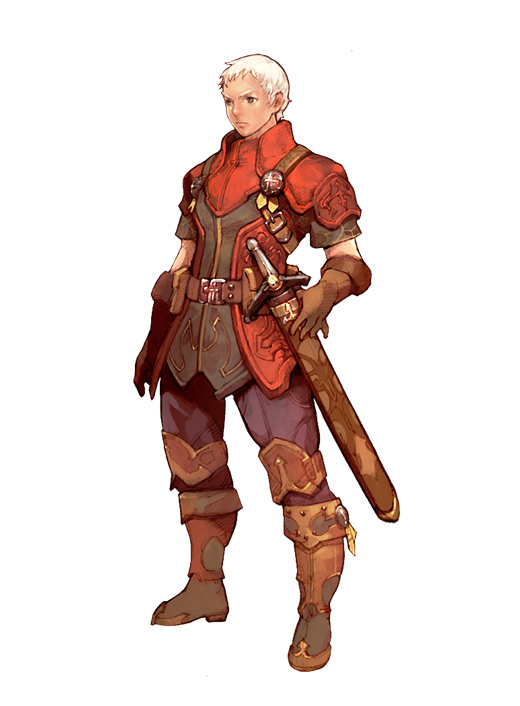 HIGH A notable level of design and polish make it go down smooth like butter.

LOW A lot of grinding is required to ensure progress.

WTF Spending points to "reveal" abilities, then spending more to earn them.

Recently the discussion of innovation versus presentation has been popping up. Specifically, how should a critic view a game that makes no attempt at breaking new ground, but instead focuses on delivering a very polished and playable experience? Of course, the answer depends on the critic and what their personal philosophy is composed of. It really couldn't be any other way, could it? That said, it has to be taken into account that the games industry is a large one, and there are players of all stripes within it. It can be safely assumed that there's room enough for games that push the envelope, as well as those content to stay sealed within it. The most recent title where this issue arose for me was the PSP's Crimson Gem Saga, released by RPG über-publisher Atlus.

Within just a few minutes of powering up the handheld, it was clear to see that Crimson Gem Saga has placed itself directly in the heart of the turn-based Japanese role-playing game (JRPG) genre, and is quite comfortable to be there.

Like so many of its peers, Crimson Gem opens the first scene with the hero waking up in bed. (If there's a more classic JRPG beginning than that, I really don't know what it could be.) Past the opening text, the game plays out exactly as expected. The main hero, Killian, soon collects a band of followers and sets out on an adventure with the requisite twists and turns. The combat system, the way health and magic are managed, the equipment and upgrades… this is all boilerplate JRPG.

However, is this necessarily a bad thing? If Crimson Gem Saga had faltered anywhere, I have a feeling that I wouldn't be quite as warm towards it as I am. Fortunately, the game nails every aspect down tight; without overstating the case, I found it to be a master-class meditation on the true essence of the turn-based JRPG, and from that perspective, it was quite charming thanks to superb production values, attention paid to fine details, masterful art and animation, extremely solid voice acting and writing full of life and humor. 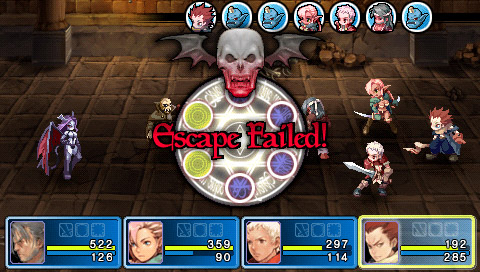 Level of craft aside, Crimson Gem Saga's formula of straightforward JRPG simplicity is actually quite appealing when compared to the numerous tricks, spins, gimmicks, and increasingly-esoteric systems that players have to learn before getting into any modern-day effort. Developers still crafting these titles don't seem to realize that they are complicating themselves into obsolescence, and they're certainly not moving the genre forward in significant ways. Rather than make the same mistake, Crimson Gem throws itself back in the opposite direction towards the genre's roots, and is successful for it. In fact, I found myself appreciating all of the retro choices made here except for one: the amount of grinding necessary to ensure steady progress.

When entering new areas, the difficulty level of play can often take quite a big jump, and the only means of survival are purchasing new armor and weapons. If Killian's wallet is found to be lacking, it's time to go out in the field and farm some foes. Although fighting enemies for the sake of money was a little disappointing, a slightly larger issue is the game's skill tree—in order to unlock new abilities and magic spells, the player must spend points earned in battles. Well and good, except that points must first be spent to "view" unknown abilities, and then more points expended again to actually purchase them. This system guarantees that these hard-earned points will often be misspent as the player tries to identify desired skills, and a more-than-fair amount of time will be spent grinding to replenish those lost points.

This emphasis on requiring the player to grind for gold and skill points is Crimson Gem's only real flaw, although in keeping with the rest of the game, I suppose it could be seen as being completely faithful to the genre. Personally, I wouldn't have minded the developers easing back and making this one concession towards modern game design, but with so much else this game gets right, it's hard to hold it against them.

The word "original" may not apply, but the level of production and care taken in crafting Crimson Gem Saga is certainly noteworthy, especially in conjunction with the pure, reductive nature of its game design. Elegance and a crystal-clear vision of its identity are its true strengths. Rating: 7.5 out of 10.

Disclosures: This game was obtained via publisher and reviewed on the PSP. Approximately 14 hours of play were devoted to the single-player mode, and the game was not completed at time of review. There are no multiplayer modes.

Parents: According to the ESRB, this game contains Blood, Fantasy Violence, Mild Language, Mild Suggestive Themes, Use of Tobacco and/or Use of Alcohol. Although this game comes with a slew of warnings, I really see nothing of consequence here for parents to be concerned about. The violence is cartoonish, and not realistic in the least. I have no recollection of any salty language, and the mild suggestive themes are probably referring to the skimpy top of one character, and a few random townsfolk comments. Personally, I would have no problems with my children playing this game at all.

Deaf & Hard of Hearing: You won't have any problems. The JRPG is one of the most friendly and approachable genres for people with hearing disabilities, and that holds true for this game as well. All dialogue is accompanied by text, and the turn-based nature of gameplay means that the action is predictable and does not rely on audio cues. It's totally playable and accessible, with no issues whatsoever.

I think brads review on the game was on point. I think the game is great. However, there are definitely some flaws that just annoy me. I’m sure its common and the same for most people who play this. I’ll start from least annoying.. 1. Skill Tree: The use of skill tree is nice. Except the fact that you have to waste precious skill points just to reveal what skill they are. This concept isn’t bad, I think if they lowered the amount of SP needed to reveal/learn the skill, then I’d be more appreciative about it. Also some skills… Read more »

John, I am truly sorry to disappoint you. For all the reasons to biff a review, scoring too highly is the one that gets me the most. Although it sounds like I enjoyed it more than you did, I do apologize if you think I was too nice.

If anything, people usually tell me i’m way too harsh (and i’m okay with that) so this is an unusual circumstance indeed. = (

This is the first time I’ve ever seen Brad give a game a _higher_ score than I think it deserves. This game is crap, pure and simple. Poor level design, doors that aren’t doors, unbelievably repetitive tile sets, uninspired character design, bland story, pointless skill attributes, pointless power ups, the list goes on. I poured about 15 hours into this game, trying against my own will to like it. The maps are probably the lamest part of the game, with several doors that arent actually doors, and invisible walls galore. Just a total waste of time and money. And I… Read more »

I actually don’t mind single player RPGs Crimson Gem Saga to have a lot of grind, because a lot of grind ensures challenge, because players can try to beat difficult bosses in two different ways. Grinding for hours, or finding the right strategies. I Sort of like ‘having’ to grind in a single player RPG, so long as it’s not too ridiculous. I had to grind a bit in Persona 3 and 4, but not too much, and I liked that.

JRPGs are one of my all time favoritie genres of games… And CGS is a great example of the genre… I think Brads review was very inciteful into alot of what the game has to offer… I especially agree with him on the superb voice acting… I am only 4 or 5 hours into the game, but already I have noticed that the story is very quirky and humorous in a very good way… I like the way the characters interac and how at this point, they really dont like eachother to much… There is so much tounge in cheek… Read more »