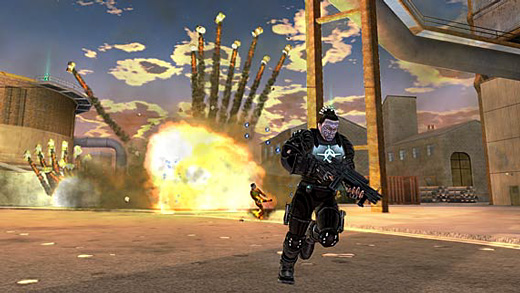 Dan says that Crackdown isn't an unmitigated disaster—I disagree. For a game that received crazy amounts of hype prior to release and was even granted the coveted honor of being host to the Halo 3 beta, it's an embarrassing, incomplete, and hopelessly botched attempt by a developer that either has no idea what they're doing, or lacked the time, talent, and/or resources to bring their concept to fruition. The idea of being a superpowered police officer works, but nothing much in the game does. It's such a train wreck, I hardly know where to begin—but I'll try.

Taking the concept of sandbox gaming to an unwelcome extreme, the Crackdown play experience feels shallow, repetitive, and lacks any sort of intelligence in terms of progression or craft. The developers seem to think that scattering anonymous bad guys around a map and surrounding them with stupid-huge hordes of snipers and rocket-launching goons is a good substitute for designing actual levels and encounters. It's not. It's not even enjoyable. Most of my time was spent either systematically eliminating gangsters like ants streaming from a hive, or trying to find a quiet corner so my life bar could regenerate. There is no complexity here, and no nuance or balance to the play at all.

Even worse, many of Crackdown's individual components don't hold together. For example, the city's architecture feels incredibly false and only serves to impede the player's movement. In fact, it's frustratingly difficult to navigate without taking the time to purposely increase leaping abilities—so much so that I was amazed the developers even bothered to include cars since driving isn't a practical option. It's much faster and more efficient to jump after leveling up, not to mention the fact that the vehicles handle like junk, height of locations is often an obstacle, and the roads are impossible to get around on. Good luck trying to find an on-ramp or even reaching some of the elevated roadways.

It may land in the genre by default, but I hesitate to call Crackdown a "sandbox" game because there's more to the formula than simply being "open." In Rockstar's Grand Theft Auto series, players follow a scripted plot line but can deviate from it at any time in order to participate in other activities. Not only are there alternate subplots to follow, there are a number of pastimes which exist simply for the pleasure of performing them, customization, and small goals that may or may not have an effect on the game overall. In Crackdown, the only option is wreaking havoc. Tired of tracking down bosses? I hope aimlessly leaping around the city or tossing cars for the hell of it sounds entertaining because that's about all there is to accomplish unless wasting time searching for stray icons is appealing. Game time well-spent? Hardly.

It's true that gaining superhuman powers and leaping through the sky to deliver fierce justice should be a winning formula—but there's really nothing to do and even less ability to experiment with or influence the elements that make up the game. Aimless and devoid of substance to the point of being pointless, Crackdown is such a raw, incomplete and unfocused effort that I actually feel insulted by the developers' gall in trying to pass this off as a full-fledged product. If I hadn't played Earth Defense Force 2017, I'd say that Crackdown was the worst thing I've played for the 360. As of right now, it's a dead tie. Rating: 3.0 out of 10.

I don’t have a specific hour-count on hand, but there was only one boss segment left, so what, 3/4ths of the way through? 5/6ths? I understand your comment about the cars, but my point was that why should i have to “level up” to drive a car in the first place, and secondly, driving is pointless since you need to jump everywhere. the roads are laid out poorly too, so the city isn’t nearly as drivable as something like GTA. sorry you don’t agree with my writeup, but games reviwers in general are a notoriously high-scoring bunch of folks, and… Read more »

For how many hours did you actually play the game? After reading your review I noticed a few comments that were not applicable. For example, you mentioned that the vehicles have horrible controls, but if you had leveled up your driving skills, you would have noticed that the agency supercar and SUV had impeccable handling (not to mention the Porsche clones and tricked-out Los Muertos sports cars). Your review is shockingly lower than every other official review that is out there, and I just can not agree with your justifications. Next time you review a game, give it a chance… Read more »

Everyone’s entitled to their opinion, but I hope that people browsing around and who are on the fence with Crackdown (even at this late date) will take the time to realize that this is an instance of an abnormally low score. The game’s average (see the Gamestats) site is over an 8/10. By far, it is generally considered to be a very good game. Sorry to hear that this reviewer just didn’t take to the experience Crackdown offers. My own opinion is that it’s a wonderful game — surprisingly good, and far better than I would’ve originally expected. I would… Read more »

Thanks for the comment. Even though we may not agree, you gave a good write-up, and i always appreciate readers stepping up to give their own viewpoint without being insulting.

whenever I want to reset and understand how lucky I am, I read a review like this and give thanks that I’m not so downright stupid as to pen rubbish like your review and so idiotic to pass this of as an informed review. You clearly haven’t read the complete garbage you throw up and compared that to the actual game. Only an online journalist in the moron department would make statements on ‘Sandbox’ and design as clearly unrelated to Crackdown and how it plays. Clearly, your just rubbish at playing the game and completely on your own with your… Read more »

Have you ever played crackdown?