More of the Same, Only Less of it 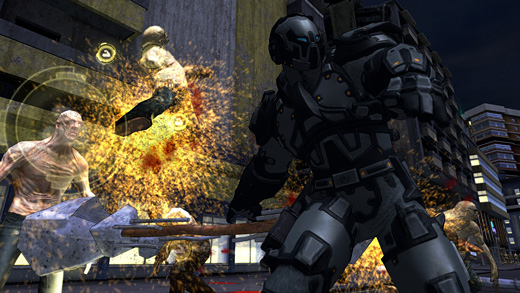 HIGH It's good to hear the voice of the announcer again.

LOW An astonishing lack of variety and absurd amounts of repetition.

WTF Why was this not released as $15 Downloadable Content?

Three years after the release of the original Crackdown, its much-awaited sequel is upon us—and the fact that it even exists is something of a Cinderella story. Overcoming game-killing obstacles like the disbanding of the original studio and a lukewarm reception that gave little hope for another installment, Ruffian Games beat the odds to revive the franchise and deliver a second installment to the open-world cult classic. However, not every fairy tale has a happy ending…

Crackdown 2 places the player in the role of an Agent; a cloned superman who functions as a pawn for the sinister Agency. The first time around, players helped shadowy figures take control of a metropolis while operating under the guise of "cleaning up the city." Now that the Agency's got it, the area has been corrupted by hordes of mutated Freaks and a rebellious faction called The Cell.  These two groups are the player's adversaries, but to be frank, story, plot and characterization don't even factor into the Crackdown 2 experience. No, this game is all about shallow repetition.

Just like last time, Agents are stronger, faster, and more durable than the average person, and exercising these abilities levels them up appropriately. Mow down hordes of Freaks with guns, and the Firearms skill increases. Get good at causing havoc with grenades, and the Explosives skill increases. While this leveling-up concept is essentially good, it's almost exactly the same as it was the last time. There are no new twists or surprises, no variation between Agents, and no opportunity for skills customization. There's also precious little feeling of improving or advancement except when it comes to Agility.

Rather than simply jumping to enhance their mobility, players have to actively search out green orbs perched in lofty locations throughout the city. Collect enough of these, and the Agent will jump so high and so far that taking to the skies quickly becomes the most efficient (and really only) means of travel. I freely admit that the aerial antics are entertaining, and many people have touted this so-called "orb hunting" as the best and most addictive part of Crackdown 2. I suppose that's true enough, but when the best part of an open-world game is collecting items, I see that as being an indicator that there's a serious problem with the content. 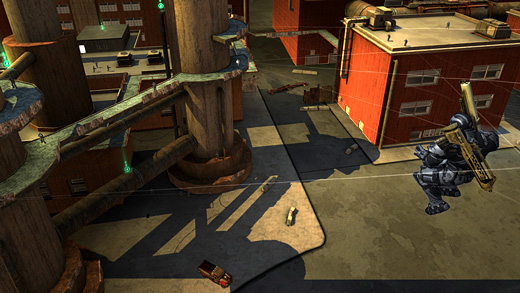 Taking a sober look at things, I think it's fair to say that Ruffian has created what is likely the most simplistic and repetitive open-world formula to date. The main task of the game is to re-activate energy lines that crisscross above the city to help quell the Freak problem. However, there's no variation to these missions. Connect three generators and send off a cleansing pulse once, and players will find that the first time is exactly like the last, with very little save intensity of the enemy opposition to differentiate them. Do this nine times, and you're at game's end.

Besides repeatedly repairing these energy connections, the player can assault Cell areas or clean up Freak infestations, but that's about it. The game completely lacks any sort of enriching peripheral content or dramatic arc. Where was the saving of citizens? Why didn't car-tossing play more of a role? The only notable event that occurred for me was near the end when it became necessary to upgrade my Agility to level 4 in order to progress. If not for that speed bump, Crackdown 2 would have been nothing but an uninterrupted five-hour string of lifeless, cookie-cutter missions.

Ruffian's work is host to a number of other problems in addition to the lack of variety. For example, auto-targeting can be problematic when focusing on faraway enemies instead of nearby immediate threats. Annoyingly, it's impossible to set waypoints on the map and it's not always clear which ledges can be grabbed and which can't when trying to scale tall buildings. When nearing the end of the campaign, it's common to get caught in frustratingly inescapable rocket launcher/enemy beatdown gangbangs until the player's Agent is mush on a sidewalk, and there doesn't appear to be any difficulty scaling relative to the number of players active. Missions that are brick walls when solo become cakewalks when accompanied by another player (or three), with no middle ground between them.

All its flaws aside (and there are many), the most maddening thing is that this sequel seems like nothing so much as a step backwards from the source material. Although I will be the first to say that Crackdown had serious issues, the original formula of taking down an assortment of gang leaders on their own turf was much more interesting and intricate than what players will find now. Quite honestly, I would recommend the first game over Crackdown 2 with no hesitation, and based on what's actually here, it seems to me that positioning the effort as a piece of $15 DLC would have been far more appropriate than trying to pass it off as a $60 retail release. Rating: 4.0 out of 10.

Parents: According to the ESRB, this game contains blood and gore, strong language, and violence. Surprisingly, I found the swearing to be the most offensive part of the game. The cartoony violence was as expected and is not recommended for children due to the gunplay and such, but it wasn't nearly as jarring as hearing the announcer spew epithets at me when he thought I was doing poorly. There's no sexual content, but kids should definitely stay away thanks to the rest.

Deaf and hard of hearing: You should be aware that there are audio cues for finding some of the orbs in the game, and this cue is not represented onscreen. As a result, some out-of-sight orbs will be tougher to find, but otherwise the game is very playable without sound since most other in-game information is easily seen.

I had big issues with the first game. Mostly the auto-targeting (targeting already dead enemies), and I did not like the vehicle handling at all. But aside from that, I mostly liked the first game. The lack of story, the orbs, the enemies, it was so simple and fun… But, I instantly disliked the demo of the sequel. They did not fix the mechanical problems, but they did change the structure of the game. And a huge number of people seem to be saying the same thing. “the first one was enjoyable, but I didnt like the demo of the… Read more »

Exactly my same sentiments I had, while playing this game. Ruffian Games did the sequel no justice at all, and I have now pinned them as a company whose sole objective is to make a quick buck. Shame on them.

I loved the first Crackdown and think it is the best true exclusive on the 360 so far. I didn’t enjoy the demo of Crackdown 2, and by the sounds of it will stay away from the full game for fear of ruining the love I have for the Crackdown canon.

I’m also not bothered any more they they were too lazy to include female agents.