A while ago, I covered the Seattle Indie Expo and I was blown away by the quality of the games being shown. Every one looked fantastic, but one that really caught my attention was Containment: The Zombie Puzzler.

Developed by my hometown neighbors Bootsnake Games, the good people of that studio were kind enough to invite me and several other members of PNWJournos down to their offices for an up-close-and-personal session with the title. Our verdict after two hours? Loved it. (By the way, there's a great trailer for the game on the Bootsnake site, BUT the graphics look much better now—that's an earlier version shown.)

If you haven't heard the details yet, Containment is a brilliant new puzzler with a very unique slant: in addition to being an unusual match-type game, it's also about surviving the zombie apocalypse.

Here's how it works…

Each board in Containment takes place in a particular environment. Rather than having a standard static playfield, matches happen in the street, near gas stations, between wrecked cars, and a number of other locations.

Every round starts with a large group of people and zombies mixed together. The goal of the game is to eliminate all zombies from the playfield (naturally.) This is done by surrounding them on all sides with people of the same type—effectively, "containing" them. The game offers Scientists, Policeman, Anarchists, and Military characters, each with their respective colors. When enough people of the same type make a circle around the undead, they unleash an attack and annihilate them with extreme prejudice.

This by itself would be more than enough for the average puzzle game, but Bootsnake has really gone above and beyond in adding elements that make the game stand out.

For example, each group of characters award special power-up items when they're used to make a match. Kill some zombies with the Police, and players can call in a sniper to eliminate any one zombie from the board. Eliminate the undead with the Anarchists and Molotov Cocktails are produced, exploding with flame and burning in a random pattern. 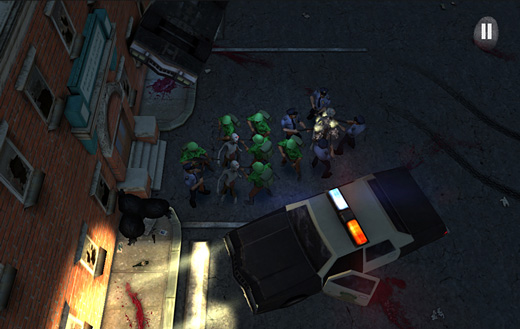 Further sweetening the experience are the environmental interactions that take place in each area. The player can knock over garbage cans or open dumpsters for random rewards, and there are often explosive canisters or damaged signs hanging overhead that can be knocked down into the playfield to crush zombies. Even better, the developers say that there are multiple pathways through the game depending on what action the player takes in the world. In one level I had the option to blow up a building’s structural support—if I demolished it, no further zombies would be able to enter the playfield, but no human reinforcements would be able to arrive either. I decided to go for it, and found out that my route to the end of the level had changed since that road was now effectively "closed" due to the damage.

Another way that the game reinforces the concept of being "in" a world is at zombies will often wander into the playfield from other parts of the level. If the current puzzle is set in the street, the undead can come from any direction that a path is open. They also sometimes drop into the playfield from the rooftops above, and if zombies are left on the board for too long, they’ll attack nearby characters and turn them undead as well. Having to contend with several real-time elements in addition to the concentration that’s needed to match correct characters on the board gives the game to feel that much more intense than the average puzzler. It's almost like combat.

Although details are not final, Containment: The Zombie Puzzler is slated for release before the end of 2011 on iPad, Mac and PC, and will cost approximately $5. Players taking the plunge can expect a story-based campaign running for approximately 6 hours, including several different locations to play through and a number of boss-class zombie battles to survive. There will also be a more traditional "survival" mode for those who just want to puzzle without going through the campaign again.

If you ask me, truly unique puzzle games are few and far between, but Containment: The Zombie Puzzler caught my attention from the first time I laid eyes on it, and after getting two solid hours to put it through its paces, I can honestly say that I was not disappointed. If you read this blog with any regularity, you probably know that I'm not the biggest fan of PC gaming for a number of reasons, but I have been known to do so for special titles that shouldn't be missed. Containment: The Zombie Puzzler is absolutely on my radar, and I'm going to be there on day one.

If you read all the way to the bottom of this preview? You should be too.