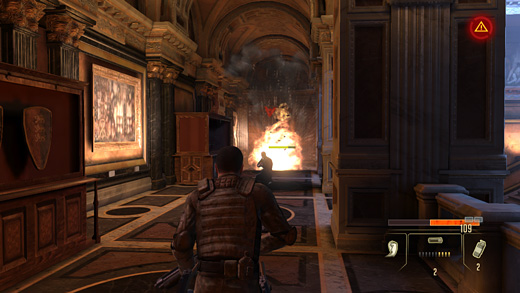 Just a quick one tonight. I actually had a list of six or eight topics I wanted to discuss, but I'm currently juggling a little bit more than I usually do, and there just aren't enough hours in the day.

Anyway, I just finished Alpha Protocol a few minutes ago and I have to say that my opinion of the game greatly improved by the time credits rolled. However, I do have to qualify that statement:

As readers of this blog will remember, my initial playthrough was a giant mess of issues and the whole project felt like a colossal disaster. It was only thanks to some coaching from friends via Twitter that I was able to appreciate the finer points of agent Mike Thorton's mission, and I can certainly understand anyone walking away from this game with a bitter taste in mouth. However, after seeing the thing through from start to finish, I certainly think that there are plenty of bits to appreciate for a player who can get past all the problems.

In case you're considering giving the game a whirl, let me share my learnings with you.

Once you're on this track, it's much easier to endure past the unpleasant sections and keep the game moving in order to see its better sides—things like a few instances of really interesting mission design, ambitious effort to craft a story that doesn't involve any (okay, well not ALL) of the usual RPG tropes, and a few parts that really make a player think thanks to in-game consequences and repercussions. Unfortunately, that's a lot of hoops to ask a player to jump through, and (like I did) it's all too easy to make different choices and end up playing the game in a way that is comparable to a bad trip to the dentist. NZ

While on the topic of Alpha Protocol, it was announced today that any hopes of an improved sequel were taken off the table. As of right now, this franchise is dead.

While I can absolutely understand that decision, I have to admit feeling a bit sad about it. There are some genuinely great moments to be found in the game, and despite all its problems (and Lord, there are many) I can't help but think that the developers were on the right track to creating something that should have been much greater than it was.

I can't deny that the game dug its own grave, but other, lesser titles have gone on to spawn a sequel or two. It's a shame that one that seems to hold so much potential won't get a much-needed chance to grow.

Thanks for the recommendations, Chi and Richard. I’ve added Way of the Samurai to my Gamefly Queue, and I’ll be keeping my eyes out for the Witcher.

I’ve noticed recently that I find myself more and more drawn to flawed games (like Alpha Protocol, Deadly Premonition, Too Human, etc…) Maybe it’s the charm of an unpolished gem?

You also might want to look at The Witcher. It has a lot of problems, but the choices you make can be extremely far-reaching.

[quote=Alex]The gaming world FINALLY receives a game in which choices actively affect the story (and feel like they have impact.)[/quote] If you like making choices that impact the gaming world, you might want to give the Way of the Samurai series a try.

I’m glad I am not the only one who is able to say that they enjoyed this game. I leveled my character in a similar fashion — Stealth/Pistol. The game was (at times, many times,) a chore. I played on the hard difficulty and the only way I could beat two of the bosses (bratty Russian kid and guy with the gloves) is by letting them glitch themselves out. Apart from the bad AI scripting, I really enjoyed the game. The voice acting was pretty good, and the characters were very interesting. The gaming world FINALLY receives a game in… Read more »

This kind of comments are the reason I read this site. I think I’ll give this game a try for sure.