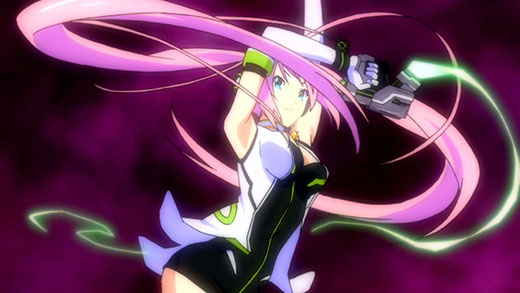 HIGH The premise is pleasantly bizarre.

LOW The dungeons put me to sleep (literally!) more than once.

WTF Putting newborns on the front lines is terrible parenting.

Like books, films, and movies, not every game is right for every player. Some titles may come close to near-universal appeal (Tetris springs to mind) but there's no doubt that narrow niches exist, and really, that's okay. Take Conception II

, for example—it's essentially a dungeon-crawling JRPG in which the main character (humbly nicknamed God's Gift) must woo and "classmate" with seven different girls in order to produce magical offspring that become teammates in battle.

It's not hard to see how a premise like this would be questionable or outright offensive to some, but I was open to whatever Conception II would bring to the table. Unfortunately, the writing is boring, the combat is tedious, and the game isn't explicit enough to skate by on sex appeal. It's a title that's unsatisfactory from every angle.

In terms of story, the overall narrative is typical, forgettable "save the world" stuff. On the other hand, I'm keen to see more dating sims stateside, and I could forgive a dull plot if the courtship parts were right. Unfortunately, the script is incredibly immature and trite, and I found it nearly impossible to connect with any of the female leads, except for one. Not only is there entirely too much talk about breasts (most coming from the female characters themselves!), they don't feel like relatable people. You're too popular? You're too shy? And you, you're some sort of lab experiment? Ugh. Making things worse, the one girl whose dialogue was most interesting to me looks so young that she easily passes as prepubescent. I liked talking to her, but the pedo-creep factor was too much.

After getting to know the ladies and deciding to "classmate", each cut-scene of arched backs and clasped hands results in a ‘star child' who's added to a roster of available teammates, and whose profession can be chosen. Conception II offers a wide range of jobs (swordsman, merchant, archer, magician, and so on) and gives the appearance of depth, but it never delivers.

Although I bred a small army of child warriors, it was difficult to get a feeling for any class in particular. I'd put together a team of thieves or a group of brawlers and wait to see what utility they'd have, but no matter which combination of troops I brought, they all felt more or less the same. This absence of distinction is compounded by a lack of meat in the finer details.

With a maximum party size of 11 (nine star children in groups of three, and the hero and a heroine fighting as a pair) it's quite a job to try and manage what each one is equipped with, but I enjoy tinkering with gear. However, since there's no noticeable benefit to putting in the effort and it's such a big job, I often let the AI auto-equip my team for me. It saved time, but led to a lessened level of connection and interest in my troops.

The combat's samey encounters play out in typical menu-driven JRPG fashion, or the player can assign tactics to each team and punt them off to be auto-managed (again) by the AI. This auto-battling seems like a neat thing until one remembers that a good game makes each encounter interesting in some way. With the dungeons offering no resistance against AI-equipped characters fighting AI-controlled battles, this so-what combat is the opposite of interesting, and my attention would frequently drift elsewhere while playing.

(Oh, did I forget about the enemy-slowing ‘chain' system and the ‘ether' system that speeds up actions during battle? They're so unnecessary and inconsequential, most players will too.)

To cap it all off, the dungeons are empty, tedious affairs that ape the sparse visual style of the Persona games. Sadly, Conception II has neither the strong writing nor the rich Press Turn combat system that carries them, and simply replicating this appearance is a fool's errand that results in cookie-cutter hallways and lookalike rooms, over and over again.

While I'm absolutely open to all sorts of content and taste, a game aiming for a certain niche must be good at what it attempts to do, and Conception II

is one which struggles to make a convincing case for itself on any front. The writing is weak, the combat is tiresome, and there's not enough skin for those open to such material. It seems impossible that a game featuring multi-partner dating and demon-battling with an army of combat children could somehow be boring, but there it is. Rating: 5 out of 10


Disclosures: This game was obtained via publisher and reviewed on the Vita. Approximately 14 hours of play were devoted to the single-player mode, and the game was not completed. There are no multiplayer modes.

Parents: According to the ESRB, this game contains: fantasy violence, language, mild blood, partial nudity, and sexual themes. Although it's not exactly explicit, some of the female characters have skimpy outfits, and there's a massive amount of sexual innuendo to be found. It's probably okay for older teens, but young ones should be steered clear. Language and violence concerns were negligible… The combat is quite tame, and the dialogue is average for a game of this sort.

Deaf & Hard of Hearing: All dialogue is subtitled, and since the game is text- and turn-based, there are no audio cues relevant to gameplay. It's fully accessible.