When I reviewed the original Coded Arms, I appreciated that the game attempted to spice up its standard FPS formula by wrapping it in a "hacker jacking into the Matrix" theme. It was something a little different, even if the gameplay was as average as could be. It was passable for a few hours, but I walked away from the game feeling that the developers didn't go far enough, and should have explored the concept in greater depth. Obviously, Konami must not have read the review. Coded Arms Contagion not only serves up the exact same by-the-numbers FPS action, but it actually backtracks and distances itself from the techno elements—the only thing that gave it some semblance of identity in the first place.

Contagion only pays the most superficial lip service to the idea that the player is a soldier transported inside a complex A.I. system. If the brief bits of dialogue didn't actually mention it several times, I'd be hard-pressed to tell that the game was set in a "virtual" landscape at all until the final three or four levels. Effectively identical to any one of the million other rote shooters that have come down the pike since Doom, Contagion sticks to the basics. Run and shoot in generic environments. Collect new guns and ammunition. Push a few switches, find the exit, and repeat until the game's over. It's flat and lifeless from start to finish. 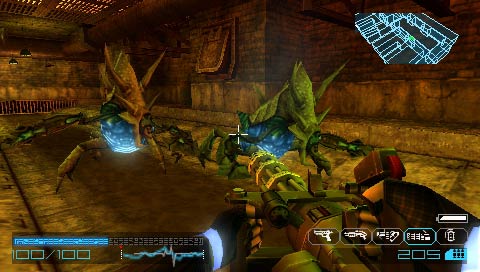 It's true that enemies dissolve into rising clouds of digital data after being defeated and the weapons are described as "Plug-Ins," but that's about as far as the metaphor goes. Without a stronger hook to the gameplay, or at least in the setting, there's absolutely nothing to recommend Coded Arms Contagion beyond the fact that it delivers lowest-common denominator shooting action and controls well on the single-analog PSP. Unfortunately, that's not exactly what I'd call a glowing endorsement.

Though I still get the sense that the potential for a solid B-rank franchise is lying dormant here, a lot more care and craft will be needed before anything starts to bloom. Players still intrigued by the idea of deleting enemy programs inside a computer should skip Coded Arms and check out the Xbox's Tron 2.0 for an example of the same basic concept executed perfectly, with style and sense to spare. Rating: 4 out of 10.