Huge thanks to Anonymous for tipping me off on how to defeat the gorilla boss in world four of Cocoto Platform Jumper (WiiWare). 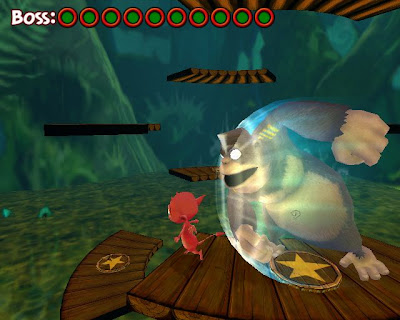 It's a simple little game that by all reckoning should have been a complete cakewalk, but this gorilla seemed invincible and all efforts to find answers on the Internet were a complete fail. My frustration at this part had grown to the point that I had actually quit the game in disgust, and I was contemplating calling Nintendo to complain that they were selling a piece of defective software. Then, lo and behold, Anonymous chips in with a comment and solves the mystery.

I couldn't believe my eyes. Not only had someone figured it out, but that same someone had also come across my blog and seen me ranting about it. The Internet is awesome! Once again, infinite appreciation for Anonymous—thanks to his info, I went back and completed the game that afternoon.

Speaking of completing games, I also put the wraps on Phantasy Star Portable on PSP. It started out as a fun futuristically-slanted dungeon crawler, and ended up being more tedium than I care to tolerate. The huge difficulty spike at the final boss was needlessly discouraging, and I ended up doing a little bit of grinding every night until I just bulldozed through it. A word to developers: if your game is a cakewalk for the first fifteen hours, don't make the last boss an order of magnitude harder than anything that's come before it. 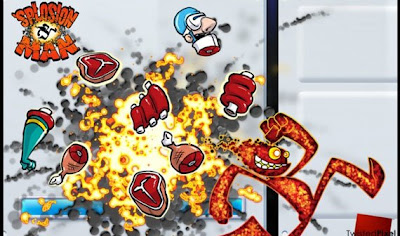 Working on the review for Twisted Pixel's 'Splosion Man (XBLA) tonight. I don't want to spill the beans before it's up, but I will say that it's bloody excellent and easily one of the best Arcade titles that's come down the pipe. Absolutely Recommended.

Gonna be spotlighting some Atlus games soon, but for now, chew on this video walkthrough from the manly-voiced Atlus Aram detailing the pertinent info on the upcoming revamp of Persona for PSP. Dunno about you, but I can't wait… And seriously, does anyone work harder to pimp their games than Atlus? I think not. They rock.

One more quick thing before I post this blog and get back to doing stuff I'm actually supposed to be doing… if you haven't already seen The Legend of Neil, it's (obviously) a NSFW spoof of The Legend of Zelda. 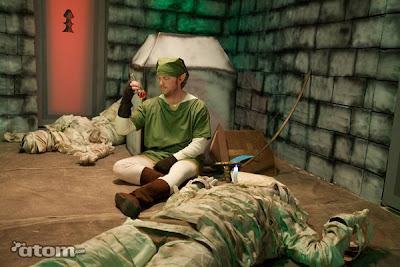 Basically, a guy named Neil gets sucked into Hyrule after erotically asphyxiating himself and he has all sorts of mishaps that will be extremely familiar to anyone who's played through the first installment of Nintendo's hallowed series. Episode seven is finally up and you can check it out here. However, definitely go back and start at the first episode if you're new to these spots. (and yes, that's Felicia Day as the fairy.)

I can’t claim credit, someone on my personal blog tipped me off.

Anyway, what you do is dodge his attacks and keep changing elevations until you are above him. Eventually, he will lose sight of you and stand still, looking around from side to side.

At this point, move so that you are directly above him, and then start making your lava bridges. If you don’t move and keep making the bridges in the same spot, the rubble from the broken bridges will fall straight down and hit him on the head. Makes total sense, right?

How did you defeat this guy?