A Shadow of Its Former Glory 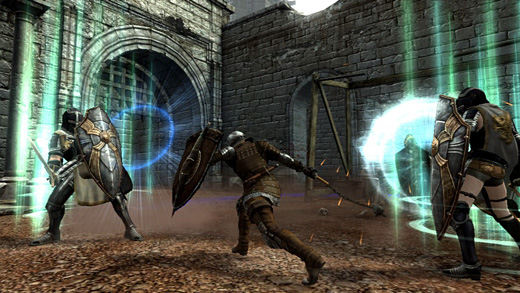 HIGH I never expected another game of this type from these developers.

LOW It's awful! How could it possibly be so awful?!?

WTF how anyone could consider this fit for sale.

Although I realize that Colosseum: Road to Freedom and Gladiator Begins weren't huge successes by any stretch of the imagination (I think Dan and I were the only two people in the Western Hemisphere who played them) they were fantastic niche titles that had a laser focus on what they wanted to do, and did it well. I enjoyed each one greatly. When I heard that Clan of Champions was essentially the same thing from the same developers on a more powerful system, I couldn't have been happier.

Now, after having finished the game? I am not happy.

Everything Dan mentions in his review is correct, and I second it. However, I just can't wrap my head around how poorly this project ended up.

It's quite rare that I say this, but I would have been totally satisfied with the exact same thing the developers created in the past with a few more bells and whistles and better graphics. That's a pretty low bar to get over, and Clan doesn't even come close. To see this new project fall so far short of games that were already underwhelming on the PlayStation Portable and PlayStation 2 makes no sense to me at all.

In fact, almost none of Clan makes sense. It's like the developers had a half-baked idea about creating an online multiplayer game and tried to shoehorn their old formula into a structure where it just didn't fit. While they were at it, they totally abandoned what made their previous single-player mode playable and somehow expected people to jump aboard and enjoy this skeleton of a game? Dan puts forth the idea that this game comes off more like a proof-of-concept than a completed project, and he's entirely on the mark. This would be a great vertical slice to show to investors. Calling it a finished project and asking people to pay money for it? It's a joke.

The character customization is so limited it might as well not even exist, the weapon selection is tiny, half of the magic skills don't have any discernible effect, claiming the gear of fallen foes (always one of the best parts of these games) is now tied into the money system, there are only a small handful of enemy types and only two real types of missions, there is no ability to customize AI teammates, the story doesn't make any sense and will put anyone to sleep with the poorly-written text, the few cut-scenes that are included don't serve much purpose, and there's no one online to play with in the unlikely event that anyone wants to play this with a friend.

It fails, literally, on every possible level.

Clan of Champions is wrongheaded, underdeveloped, ill-fitting, and it makes me quite sad to see that the developers wasted time and resources on something so poorly designed from square one. Crafting another single-player focused Gladiator-style game would've been a far more enjoyable, far more sensible project, and I'm guessing that the wretched quality of Clan will make sure that never happens. Rating: 2.0 out of 10.


Disclosures: This game was obtained via publisher and reviewed on the PS3. Approximately six hours of play were devoted to the single-player mode, and the game was completed. No time was spent in multiplayer modes.