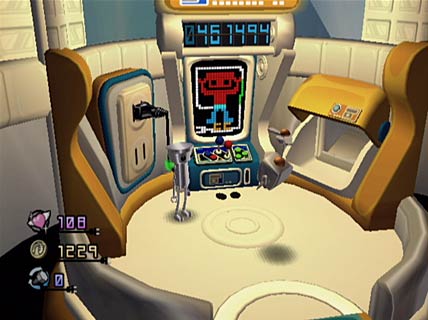 Although the GameCube suffered from a thin, underfed library that paled in comparison to the competition's, a few unappreciated gems still managed to slip through the fingers of software-starved players. Out of everything that I've spent time with on the GameCube, I'd say that Chibi-Robo was hands-down the best effort that no one knew about. Even worse, I'd go so far as to rank it in the top five titles on the system as a whole, making its lack of presence among ‘Cube fans even sadder and more disturbing.

Although initial appearances would lead most people to believe that Chibi-Robo was a cutesy, brightly-hued and simple-minded affair, only the first two claims are true. Once past the day-glo exterior and saccharine character designs, the game reveals a surprisingly complex structure and thought-provoking, offbeat, and consistently entertaining style of play.

Two inches tall and dragging an electrical plug behind him, Chibi-Robo is free to roam the Sanderson household as a combination errand-runner, marriage counselor, dustbuster and all-around majordomo. Although the entire adventure takes place within the confines of an average-size house and backyard, the developers have done an amazing job of keeping things fresh and engaging by making sure that the player always has a healthy array of tasks that can usually be tackled in any order. Although most of these jobs boil down to being fetch quests of one sort or another, the hook is that every member of the household has their own dramatic plot arc which is revealed to Chibi bit by bit as he fulfills his duties.

When I got tired of trying to help the dehydrated frog in the backyard, I'd spend some time trying to reconcile the estranged mother and father. When I had done as much as I could for them, I'd move on to raising the spirits of the shipless pirate in the basement, or try my hand at being a messenger-robo ferrying love letters between two toys. Most of these jobs are fairly straightforward, but some can only be activated at certain times or under certain conditions, and a handful of objectives are so devious that they require serious detective work and conjecture to unravel. Chibi-Robo may look like a kid's game, but that couldn't be further from the truth.

I can't praise the structural work and the interconnecting quests enough. I was sincerely impressed not only by the sophistication of the design, but by the way I wanted to go above and beyond the level of effort I usually put out in order to make sure that everyone received the happy ending they deserved. Going for absolute, 100% completion is something I've only been motivated to do a small handful of times over the course of my gaming career, but Chibi-Robo absolutely had the addictive magic that so few titles capture. Rating: 8.5 out of 10

nothing i like better than turning someone on to a game they might otherwise have skipped. you just made my night. = )

I love this series of articles. The earlier installments quite often turned up things I’d never heard of but that sounded quite interesting. (Best example of this would be Disaster Report, which I snagged for 8 bucks and played through pretty much nonstop, rare for me. It’s certainly not the best PS2 game out there, but it deserved a lot more attention than it’s gotten.) These days I’m up on pretty nearly all the new releases, so it’s not so much a chance for me to run into unfamiliar games as reconsider ones I’d previously dismissed based on lukewarm reviews.… Read more »

Not to belabor my review, but it’s well worth tracking down… what’s it going for in the UK now? it’s dirt-cheap here in the US, but it’s well-worth full MSRP, IMO… is it higher than MSRP there?

I wanted this title ever since release, but it’s now incredibly hard to find here in the UK. Let alone at a bargain price. 🙁