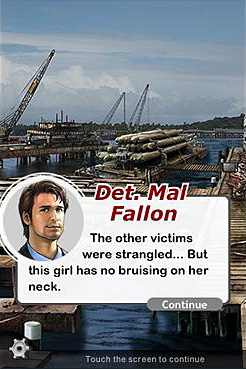 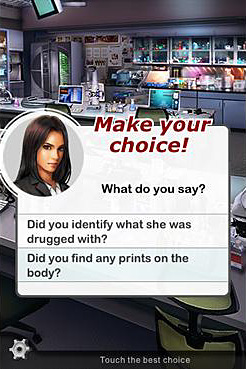 HIGH The clever dialogue when I figured out a puzzle without any clues.

LOW Replaying (and re-reading) the final scene four times trying to get it right.

WTF Why is there no option to quit and restart mid-chapter?

Before owning an iOS device, I never thought the games would satisfy me—I'm just not a fan of touch controls or virtual d-pads. Once I got an iPhone, I quickly realized that I'd only been half right—I still have little interest in the kinds of things I can get on a traditional handheld, but I'm developing an appreciation for those that feel tailor-made for the hardware.

Case in point—Cause of Death: Volume 1—The Maskmaker.

A text-based crime drama starring San Francisco detective Mal Fallon and FBI special agent Natara Williams, Cause of Death asks players to accept reading as the game's main interface. Although there are simple backgrounds and small portraits to illustrate the proceedings, there's no jumping, shooting, animation, cut-scenes or any other "action" onscreen—it's all unfolding inside the mind of the player.

Honestly, it's the sort of thing that I probably wouldn't play on a more traditional console or handheld, but it's a perfect fit for the iPhone. Since sound doesn't play a large role, it's possible to sneak a few minutes in during a tedious meeting. It's also great because it only takes one finger to operate, so it can be played with ease on an exercise bike, or while stirring oatmeal on the stove. Since the iPhone is so conducive to gaming in short bursts, something as light and simple as Cause of Death feels just right.

However, regardless of how convenient it is to play, I would have dumped the game immediately if the writing wasn't as good as it is. The dialogue and narration are solid, and on-par with the sort of page-turning paperback that you might take to the beach, or on a long flight. There's a certain Harlequin-esque, quasi-romancey vibe to everything and the little bits about Mal's broken marriage or Natara's former partner may be cliché, but it all works effectively towards painting a picture of who these people are supposed to be. It ain't War & Peace, but that's a good thing—the plot moves quickly, it has personality, and it's easy to jump in and out at a moment's notice. 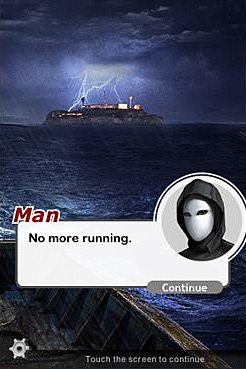 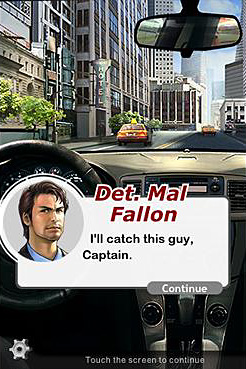 Cause of Death isn't a pure reading experience, though. As the story unfolds, players will take turns alternating between Mal and Natara as they hunt a mask-obsessed serial killer murdering girls in California's Bay Area. Every few minutes, players will be asked to make a choice between two options; things like "Kick High" and "Kick Low" when fending off an attacker, or "It's about a gas leak" versus "I'm investigating the Maskmaker" when interviewing an elderly woman.

The choices are obvious at first, but as the story progresses, sussing the correct answers becomes trickier—sometimes it's pure guesswork. There is merit to nailing the choices, though. There were multiple outcomes for most scenes, and it is possible to completely fail areas or have characters die due to incorrect thinking. The content may be light in tone but it's not weightless, and virtual detectives who can't crack the case can look forward to one of several less-than-pleasant conclusions…

There's definitely a lot to like about Cause of Death for players (like me) who can get into text adventures, but be warned that it's got a few really annoying quirks.

Although Maskmaker is free, it has constantly-rotating banner ads at the top of the screen that can't be dismissed. Other ads will pop up at regular intervals and obscure the entire screen until clicked away. This in-my-face advertising drove me insane, and I would have gladly paid .99 to have the ads removed. Bizarrely, that was not an option. (These ads have been removed in the series' second installment, thankfully.)

The other thing that irked me was that it's not possible to quit and restart a section until it's complete. I could sometimes tell right away that I wasn't doing well, and I wanted to stop and try again. Unfortunately, the game forces players to see the current section through before giving that option. It's rarely more than five or ten minutes to the conclusion of any given scene, but it was still an aggravating inconvenience. It is to the game's credit that these two app-specific design crimes didn't drive me away.

Although Cause of Death: Volume 1—The Maskmaker isn't the sort of thing that I'd want to play all the time or for long stretches, it suits the iPhone to a "T" and pleasantly fills little gaps in my day where other, more involved games wouldn't fit. It's sort of like a snack, really—a little morsel of romance-flavored cotton candy to tide me over when I don't have time for some triple-A steak and potatoes. Rating: 7.5 out of 10—points deducted for excessive, intrusive advertising.


Disclosures: This game was obtained via free download and reviewed on the iPhone. Approximately 2 hours of play were devoted to the single-player mode, and the game was completed. There are no multiplayer modes.

Parents: This game is not rated by the ESRB, but if it was, I'd guess it would be about a T, and appropriate for older teens. Although there's no explicit sexual content, there's suggestions of the subject. Some language is slightly salty, and violence does play a role in the story—it is about a serial killer, after all.  Players mature enough to be engaged by the reading-based gameplay should be fine.

Deaf & Hard of Hearing: Have no worries. I played the entire game without sound and had no issues whatsoever. It's all about the reading, so audio cues are totally nonessential.