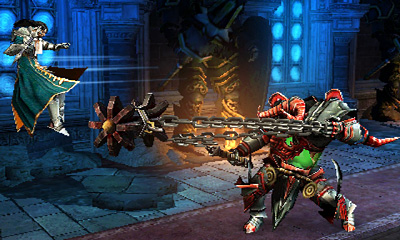 HIGH The battle with the Daemon Lord in Chapter 3.

WTF Who or what was the Lost Soul supposed to represent?

Castlevania, as a series, has gone through many incarnations.

From humble beginnings as a straight action title to being co-founder of an entire genre, there are few properties with its staying power and persistence. Coming as a surprise to probably no one, we've entered into another phase of its evolution— the Lords of Shadow cycle, of which Mirror of Fate is the second entry.

This 3DS iteration is a side-scrolling action title featuring combos and platforming, although it does include the item-hunting and map-roaming made popular by the most famous installment, Symphony of the Night. Unfortunately, Mirror of Fate fails to properly establish its own identity. By trying to blend two distinctly different types of gameplay together, it ends up in an unsatisfying middle ground.

The adventure begins with a prologue starring Gabriel Belmont, vampire-hunting star of the previous Lords of Shadow. I haven't played that title, so much of Mirror of Fate's story was lost on me. I could certainly play with no problems and followed the plot in general, but much of the script is filled with references significant to those already familiar with the new lore.

However, despite feeling a bit left out, I was inspired to track down a copy of Lords of Shadow to see the original tale and make sense of these new events, so that says something about how interesting this spin on the mythos was—especially after the final twist at the end. (By the way, if you haven't played Lords of Shadow, its ending is spoiled within the first few minutes of Mirror of Fate. Act accordingly.)

Looking at the combat, each of the game's three characters (one per chapter) are similar in that they all wield the iconic 'Vania whip, but each has his own set of special weapons and abilities—things like wings for a gliding double jump, a ghostly spirit that deflects incoming attacks, or life-restoring Light magic. While some of these perks are more effective than others, the variety was still appreciated. That said, the core combat isn't quite up to snuff.

Players will spend a lot of time putting nasty monsters down, so it's unfortunate that hitting them feels mushy and imprecise. Worse, the first two characters are underpowered—it takes just shy of forever to put normal enemies down. The whips simply lack punch. I never got a sense of impact or force when fighting; it was as if my lash was lightly caressing them and they decided to keel over once they'd had enough. 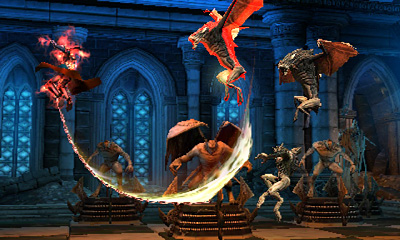 Mirror of Fate's melee is also undercut by an abundance of unblockable attacks that need to be dodged. However, these unblockables aren't telegraphed clearly enough, they come too often, and the controls never feel as precise as a top-notch actioner demands. Many cheap hits were taken.

The Symphony-inspired exploration elements fare no better than the combat. Although minor items are locked away until the necessary abilities are earned, there's little motivation to track them down later since the levels feel more suited for "keep-walking-to-the-right" action. Further, going to the trouble of retracing my steps was never rewarded with anything significant. I would have preferred the developers focused their efforts on increasing tension as the player progressed rather than including item-hunt elements for a segment of the fan base that won't be satisfied anyway.

Overall, Mirror of Fate feels unfocused and under-produced. The fighting doesn't pop, the item collection isn't OCD-inducing, and as someone new to Lords of Shadow, it was strange to be given mere breadcrumbs for the plot. However, the strangest thing is that despite all of these problems I still enjoyed the game a fair amount.

As I said earlier, the new direction for the Castlevania mythos is quite interesting and certainly unprecedented. The traditional role of the Belmont clan has been radically redefined, and it feels fresh.

I was also a fan of the art direction—Mirror of Fate is distinct from its predecessors in a visual sense, yet it retains enough of the familiar elements and hallmarks to be instantly accessible. For example, the elements and atmosphere in Dracula's castle are clearly different from what they were in past games, yet still feel right on target.

The larger enemies, dramatic QTE events, and the occasional setpieces helped to win me over, as well. Squaring off against the Daemon Lord in Chapter 3 was impressively choreographed, and riding the back of a giant insect underground was an unexpectedly pleasant surprise. Being chased down a tower by a giant bell crashing through its interior was also a high point. Things may be lukewarm between the sections that sizzled, but that sizzle is tasty when it happens.

Although Mirror of Fate doesn't live up to its full potential, it often comes close. I can see the beginnings of a fantastic new-school Castlevania experience trying hard to emerge here, and with just a little more polish and precision, MercurySteam would have turned out a solid winner. It's not yet fully evolved, but the work done here is still a valid step towards the future state of this ever-changing series. Rating: 7.0 out of 10.


Disclosures: This game was obtained via publisher and reviewed on the 3DS. Approximately 12 hours of play were devoted to the single-player mode, and the game was completed. There are no multiplayer modes.

Parents: According to the ESRB, this game contains blood and gore, partial nudity, suggestive themes and violence. I can't help but think that half of these warnings come from one particular boss battle against a succubus who lunches on lightly-dressed ladies, but there's no question this game is aimed at older players. The tone is fairly dark and some of the more graphic sequences do showcase blood. It's possible to do brief finishing moves on enemies, and some of them are rougher-looking than others. Personally, I think the M rating is overkill, but there you go.

Deaf & Hard of Hearing: There aren't any problems. I played through more than half of the game with the audio off and encountered no issues. Subtitles are available for dialogue sequences, and I never needed any sound cues to keep up with the action. From where I'm standing, this one is totally accessible.

I don’t think you can judge the game without having at least sampled Castlevania: Lords of Shadow. Having played that you would see that Mirror of Fate is continuance of that world until there is a Lords of Shadow 2. It’s like a fill-in story to make that world work. I’m not saying that you need to play it to love Mirror of Fate, but the tone of the story and gameplay would probably fit better. Still I don’t know whether it was a great idea to move it to the 3DS. Might have been better to put it on… Read more »