What is a man? A miserable little pile of… awesome! 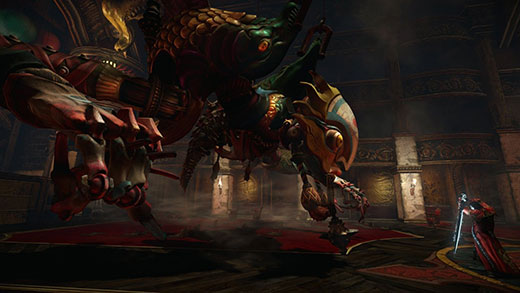 HIGH Taking out a horde of enemies flawlessly while moving like lightning.

LOW The stealth section in the garden needs some tweaking.

WTF This game's Metacritic score. What the hell is wrong with people?

My time with Castlevania: Lords of Shadow 2

was a happy accident.

I played the first Lords of Shadow for two or three hours, and it didn't grab me. I put it down and never came back, and had little interest in the sequel. My fellow writers apparently felt the same, since nobody was jumping up to claim the LoS2 review copy. I had nothing on my plate so I figured I'd ‘take one for the team', but to my surprise, the game grabbed me from its first moments and kept me hooked until credits rolled.

Lords of Shadow 2 picks up a thousand years after the end of the first. Players control Dracula himself, awake after a millennia and in a desiccated, weakened state.  He's weary of the evil thing he's become, and of his immortal existence. In order to end himself, he agrees to work with a necromancer towards preventing the impending return of Satan in exchange for the true death he desires.

This is an intriguing premise in many ways, and one which takes a unique approach by not only getting inside Dracula's head figuratively, but literally. The developers have split the adventure into two parts—the ‘real' world set in the modern city that's grown around the ruins of Dracula's castle, and the ‘memory' world that exists in sequences that may be dreams, but may be something else as well.

To MercurySteam's credit, the story was anything but the quickie throwaway I expected. The wealth of finely-acted cutscenes from Patrick Stewart and Robert Carlyle work to expand this unusual narrative, and it goes deeper than most action titles dare. I became quite invested in the story, and after seeing the game through to completion, I think this radical re-envisioning of the Castlevania mythos is fairly brilliant, and doubly so for a series which has never, ever been known for its narrative.

However, as I just suggested, these games have always been about their gameplay, and I was happy to discover that Lords of Shadow 2 does not disappoint.

Dracula's action happens in full 3D and offers three aspects of attack—a standard blood whip, a sword which restores his life with each strike, and fiery fists used to break through enemy shielding. All three have various skills and enhancements to unlock, and by game's end, a wealth of moves will be at the player's disposal. Going from a long-distance lash into an icy cut, and then ending with a vertical whirlwind of fire is effortless and impressive.

Lords of Shadow 2 motivates players to go after extended combo strings by granting the energy necessary for sword and fist usage only after achieving a certain number of strikes without taking damage. It's a good system that encourages mastery, but the developers undercut themselves by making it too easy for these combos to be interrupted. It's tough to start generating magic while fending off groups of enemies, and far too many of them have unblockable attacks that come with little or no warning. Despite this, the action remains quite fast and flowing, and it's a grim sort of joy to see Dracula dashing forward and back, attacking enemies and turning the screen into a whirl of bloody movement.

As good as the combat is, the developers were smart to break up the action with a variety of other challenges, mostly in stealth or environmental navigation flavors.

The stealth sequences have been made out to be game-ruining by some, but I found most of them to be enjoyable. Seeing Dracula transform into a swarm of rats to scuttle his way through pipes touches on a skulking side of vampirism that games don't often employ, and he's also able to possess guards, send out a cloud of bats as a distraction, or turn into a mist to escape detection. In general, these segments are quite short and easy, though there were two in particular which had me gritting my teeth. Even so, these two instances represent about twenty minutes of irritation out of a twenty hour running time, so it's absurd to condemn the game over them.

As for the navigation, MercurySteam has given Dracula a large world to explore, divided into big chunks and absolutely filthy with secret nooks and crannies to explore—it's essentially an analog to Symphony of the Night, but with a third dimension and quite a bit of height and depth. I was impressed by the crumbling castles and ruined cityscapes, and while climbing or leaping, would often spot distant balconies or lonely spires to visit later, after acquiring new abilities in true Metroidvania fashion.

Even more impressive is the level of detail devoted to bringing this game's world to life. The graphics are absolutely stunning for the PS3, and every aspect is loaded with details showing just how much time and effort the developers put into it—every new vista is more impressive than the last, every room contains eye-catching sculptural work and architectural nuances, and the sense of scale and personality in both the real and dream worlds is top-notch.  And the boss encounters? Fantastically demonic stuff, with every enormous challenge full of adrenaline and drama. Special kudos go to the incredibly cool redesign of the Grim Reaper, though the rest of the foes are just as intimidating.

Although I started playing the game out of sheer happenstance, it turned out to be a blessing in disguise. I enjoyed Lords of Shadow 2

far, far more than I ever expected to, and have no hesitation recommending it to anyone looking for dynamic third-person action, environmental exploration, or an intriguing new spin on the Castlevania mythos. MercurySteam has done such a fantastic job revamping this classic series that I'm now motivated to go back and revisit the first game, and if there's higher praise than that, I don't know what it is. Rating: 8.5 out of 10


Disclosures: This game was obtained via publisher and reviewed on the PS3. Approximately 22 hours of play were devoted to the single-player mode, and the game was completed. There are no multiplayer modes.

Deaf & Hard of Hearing Gamers: There shouldn't be much difficulty in playing the game. Although there are a few audio cues for monsters nearby, they're of little consequence since they're almost always in view. There are also audio cues for some power-ups, but they're represented visually as well. All dialogue is subtitled.

Even when we part company critically (*cough* Soul Sacrifice *cough*) I always appreciate your take on games.

Typically, though, we’re of a similar opinion.

It’s a relief then to hear you praise the sequel to one of my surprise favorite games of this (er, last?) generation.

Can’t say I’m eager to trudge through stealth sequences (stealth in an action game isn’t exactly peanut butter and chocolate for me), but it sounds like there’s enough on offer to make it worthwhile.

One more game to add to the backlog before even considering a PS4!