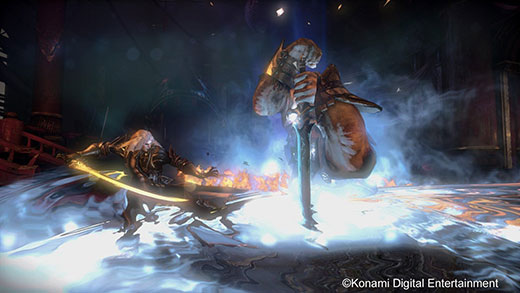 HIGH The idea of explaining what was happening while Dracula slept is great.

LOW Being stuck at the elevator puzzle for way too long.

WTF Why are the skeletons the toughest enemies in the game?

Although I'm not usually one to champ at the bit for DLC, I was happy to hear that Revelations was not only a thing, but that it was coming so soon after I wrapped one of my favorites this year. Castlevania: Lords of Shadow 2 was so good, in fact, that I was eager to return to its world even after putting 22 hours into the campaign – far more time than I'd usually want from an action title.

is a single-player story-based mission set before the events of LoS2 proper, and the developers have built it upon a novel idea — since the game is a Metroidvania, this DLC is about taking control of Alucard and placing the items of power that Dracula must collect after he wakes up. When playing titles like this, I've always wondered who puts the powerup items where they're found and why, and this is the first time I can remember a developer actually attempting to answer that question.

Of course, despite controlling a different character, Revelations is technically similar to LoS2. The environments and controls are instantly familiar, and Alucard's Crissaegrim sword has the same life regain/shield break properties that Dracula's weapons have.  On the other hand, Alucard's special powers are new – he can transform into a fast-running spirit wolf, he can reverse time in short bursts, and can become a swarm of bats for navigation. With these powers in mind, the devs have given Revelations a puzzle-heavy slant.

Although the combat still comes fast and furious with enemies that spam too many unblockables, the majority of playtime is spent figuring out how to solve environmental challenges. From collecting stolen keys behind locked doors to rasing and lowering the blood level flooding a tall room, these head-scratchers are generally well-done, and my only criticism came with the very first puzzle. Without spoiling things, I thought it was asking too much from players who've just started and are unfamiliar how to fully exploit Alucard's tricks. It was definitely not the best way to begin, but everything fell into place past that, and my time as the son of Dracula was appreciated.

Although I can't say it's a must-play for Lord of Shadow 2 fans, Alucard is cool, he's classy, and I want more of him in a leading role. Until then, Revelations

is two or three more hours of quality content for an underrated title, and the cleverness of its core idea was definitely worth the price of admission. Rating: 7.5 out of 10.


Disclosures: This game was obtained via paid download and reviewed on the PS3. Approximately 2.5 hours of play were devoted to the single-player mode, and the content was completed. There are no multiplayer modes.

Deaf & Hard of Hearing Gamers: There shouldn't be much difficulty in playing the game. Although there are a few audio cues for monsters nearby, they're of little consequence since they're almost always in view. There are also audio cues for some powerups, but they're represented visually as well. All dialogue is subtitled.