Storming the gates of great design 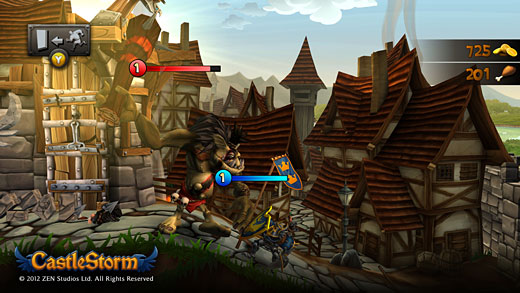 HIGH Figuring out the castle editor.

WTF Why have I never heard mention of this game?

I’m not generally a fan of real-time strategy nor tower defense, so I think I can be at least partially excused for overlooking CastleStorm when it debuted on XBLA back in May. However, when in need of something to play on the Vita, I decided to give it a shot and I’m glad that I did. Not only is a great fit for the handheld, it’s a great game overall.

CastleStorm blends elements from several genres (most notably those name-checked above) but puts them together in a way that feels fresh and interesting.

In the single-player campaign mode, gamers are in control of a pre-made fortress with a ballista mounted on the front gate. This fortress is shown from the side in cutaway 2D fashion, so a cross-section of each room and its inhabitants are clear to see. It’s a bit like an ant farm in the shape of a castle, and on the other end of the battlefield is an enemy structure, similarly displayed.

When battle begins, players have some choices. They can send troops to march across the field between the castles, they can cast various magic spells, or they can spam the ballista and launch all sorts of projectiles at the enemy. Spare bits of armor, rainbow-trailing sheep or exploding apples… it’s all fodder to be fired. The game is won by breaching the enemy gate and having soldiers bring a flag back, or by lobbing enough ammo to reduce the opponent’s castle to rubble. It’s a bit like Angry Birds in some ways, but not nearly as finicky.

This formula might seem too straightforward at first glance, but the magic is in the details.

Over the course of the campaign, a steady stream of soldier and ammo upgrades are unlocked to keep things fresh, and there’s a big twist halfway through that was quite unexpected, yet welcome. There’s also a significant amount of strategy to be found in how the different weapons and troops function—is it worth investing heavily in airborne dragons, or are resources better spent on harpoon buffs? Is it better to slow the enemy troops with speedy wolves, or to pelt them to fragmenting ice boulders?

This strategy is supplemented by the superb castle customization mode. Players not satisfied with the pre-fab forts can wipe the slate clean and build a structure from the ground up. The catch is that only a certain number of blocks can be used, and the rooms installed correspond directly to which resources will be available during battle. It also matters where the rooms are placed within the castle—if the Ogre’s training chamber gets blasted by an enemy cannonball, that Ogre will be unavailable during the fight. It’s all a little overwhelming at first, but designing my own fort was a fantastic addition once I grasped the mechanics.

In most respects, CastleStorm is outstanding, and its bite-size missions are a perfect fit for on-the-go play. However, the load times are too chunky, and I was occasionally frustrated with waiting when I was raring to get back into the action. It’s also worth noting that while the campaign offers a measured, gradual climb in difficulty, there’s one particular mission that stands out as a frustrating roadblock.

Titled ‘Homecoming’, this level takes away the castle and puts the player in charge of a ground-based hero character who is then rushed with enemies. I put over an hour into this mission, and came this damned close to quitting the game in anger. I eventually completed it and moved on, but that section was a bizarre, unpleasant anomaly compared to how smooth the rest of the game was.

My only other complaint is something that I can’t fault the developers for. CastleStorm offers online play against others, and although I don’t usually care for versus play, the combination of strategy and skill here was quite appealing. I enjoyed the competition, and was hooked immediately. Unfortunately, finding people online was tough, and the online community doesn’t seem robust at the moment.

After completing the campaign and getting in what multiplayer I could, I walked away from CastleStorm feeling satisfied and impressed in nearly every respect. It may have a generic-sounding title and it’s tough to tell what it’s about from screenshots, but I can’t recommend it enough to players interested in an unusual blend of strategy and real-time action. Bring the spiked cannonballs and tell the bear riders to saddle up… The enemy castle is coming down. Rating: 8.5 out of 10

Disclosures: This game was obtained via publisher and reviewed on the Vita. Approximately 8 hours of play were devoted to the single-player mode, and the game was completed. Less than one hour of play was spent in multiplayer modes.

Parents: According to the ESRB, this game contains: blood and violence. Although there is human-on-human violence, it’s cartoonish, none is very graphic, and the characters are rather small on the Vita’s screen. The game also keeps a fair bit of distance between the player and the action… it’s more strategic than visceral. I let my youg son watch me play, and had little qualms about it.

Deaf & Hard of Hearing: No problems here. Dialogue is subtitled, and there are no audio cues necessary for gameplay. It’s fully accessible.