Flying through the air with the greatest of satisfaction 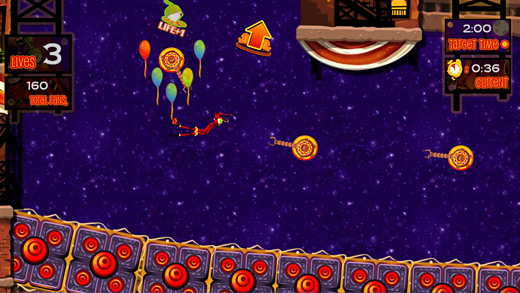 LOW The extra S-levels at the end of the game can be hair-pullingly difficult.

WTF And this isn't a full-fledged Arcade game… why?

A perfect example of the old adage that good things come in small packages, the unassuming, overlooked, practically invisible CarneyVale Showtime from the Gambit Game Lab is one of last year's best titles that nobody played. Located in the user-created Community Games section of the new Xbox 360 dashboard, there's not really anything to distinguish CarneyVale from the dozens of uninspired games tucked away there—but only after a minute or two of play, it's clear to see that it stands head and shoulders above the rest.

Although initial impressions might be deceiving, CarneyVale Showtime is in fact, an extremely elegant and clever design that requires a good degree of hand-eye coordination. Its challenge is nicely complemented by the absolutely spot-on controls and impeccable level of polish present everywhere throughout the game.

Taking the role of Slinky, a circus clown with big dreams, players start each segment by launching the star of the show into the air from a cannon. All levels are vertical in nature, and the goal is to get Slinky from the bottom to the flaming hoop high above at the very top. The catch? Slinky is a ragdoll. The player has only limited control over his movements, and it might even be fairer to say that the player actually controls the level itself, rather than the main character.

This unorthodox style of play is accomplished by ubiquitous grappling hooks that populate each area. As Slinky goes up, pressing A near a hook will make it grab him, and prevent him from falling down. As he's being held, the hooks will spin Slinky around until released, the built-up momentum catapulting him even further up. Trajectory and inertia are the gods that rule this domain.

The easy-to-grasp, straightforward nature of the early levels soon give way to more challenging tests of finesse and skill as each successive level demands a greater degree of precision and timing. Getting Slinky to go where you want him to is almost an art, and every time I thought I had the game figured out, the developers threw in new hooks to keep me on my toes. Carefully layered elements like a death-preventing air-dash maneuver or a constant stream of steerable rockets to ride ensure that there's never a chance for boredom or repetition to set in.

The game is interesting, exciting, finely tuned, and most of all quite unique; I derived an immense degree of satisfaction from flinging poor Slinky from hook to hook on his grand journey towards circus superstardom. Relatively simple, tactile games like CarneyVale Showtime are few and far between these days, and ones as well-done as this number even fewer. It may be found in the amateur section, but CarneyVale Showtime is a consummate professional. Rating: 9.0 out of 10.

Disclosures: This game was obtained via paid download and reviewed on the Xbox 360. Approximately 9 hours of play were devoted to the single-player mode, and the game was completed, except for the final two S-Levels. There are no multiplayer modes.

Parents: This game is not rated by the ESRB, but I can personally assure you that there is no offensive content to be found anywhere in the game. A silly-looking clown pops balloons and occasionally bumps into electric panels as he flies through the skies… I would be hard-pressed to think of something more harmless. Needless to say, there's no violence, no questionable language and no sexual content whatsoever. It's fine for the whole family.

Deaf & Hard of Hearing Gamers: You will have no problems. This is a very visual, very tactile game that does not require a sense of hearing. There are no significant auditory cues, and the game plays just fine with no sound at all. It's totally accessible.