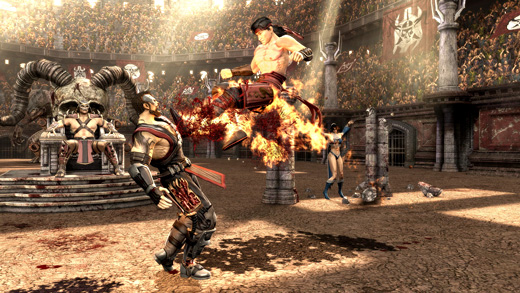 , and if you read this blog, you'll know I'm a fan of this latest iteration. I have much admiration for the work that NetherRealm Studios has put into the project, and in my view, this is the best MK of them all, bar none.

However, something interesting happened while I was going through the Story mode…

For those that don't know, the Story mode is a reworked mash-up of the plotlines from several of the older MK games. Basically, the writers stitched all of the plots together, cleaned everything up so that the linear progression of events made sense, and expanded the relationships between characters a great deal. It's a fantastic mode (easily one of the best that a fighting game has ever had) and it's a great piece of fanservice.

However, the twist is that since the Story mode needs all of the characters to survive in order to actually tell the story, players are not allowed to perform Fatalities. After all, it wouldn't make much sense to have Baraka challenge Jade in Shao Kahn's palace if he was already blown to smithereens fourteen matches earlier. It seemed a little odd at first, but I soon forgot that the bloody moves had been disabled, and I rolled credits on it feeling quite satisfied.

Here's the weird thing: after completing Story mode, I started playing Ladder mode; basically a standard arcade mode like those found in just about any fighter. After performing my first Fatality, I felt a little… wrong. It may not make sense, but my gut feeling was that ripping the skin off of my opponent after a victory didn't belong, or that it was too much. It was a little jarring and dissonant.

Back in the day when MK first hit the scene, it was pretty clear to anyone with half a brain that the game itself could not hold a candle to any of the Japanese-produced fighters at the time. It was quite inferior, technically speaking, and although the developers may argue the point, it was widely understood that the gore was what its fame was built on. If not for the graphic level of violence, I have no doubt that MK would have faded away with barely a whisper, like so many other subpar titles at that time. 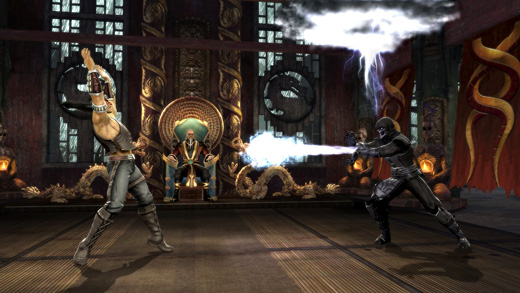 With this in mind, there's no disputing the fact that Mortal Kombat and gruesome acts of violence go hand-in-hand. We are talking core identity here. However, the quality of gameplay has improved so much in this latest iteration that it absolutely feels like a well-rounded, interesting and deep fighting game—and in my opinion, no longer needs Fatalities or über-violence to justify its existence. Going further, I'd even say that the gore on display is almost a distraction from what the game actually offers; perhaps even cheapens it.

Don't get me wrong, I don't have a weak stomach and I have no problem with violence in games. I'm also a huge horror fan, so I'm no stranger to seeing all sorts of crazy deaths and violent acts, but in this particular case things are so over-the-top bloody and gruesome that it's a little off-putting. I now find myself skipping the Fatalities altogether and finishing each match with a much tamer uppercut or jump kick just so I can move on to the next round.

Maybe it's because I'm older, or because I'm a parent, or maybe it's just that my taste and views on what makes a good game have shifted, but I can't get away from the feeling that the graphic acts of dismemberment and decapitation delivered with each Fatality are obsolete and outdated; vestigial components which no longer serve a purpose other than to push the game's gross-out factor through the roof. Seeing this type of bloodshed may still hold some appeal for some, but not for me.

Violence in a fighting game is quite appropriate and I'm quite happy to play what NetherRealm has delivered—and will continue to do so—but if Fatalities were left out of the next installment, I can honestly say that I wouldn't miss them. I realize that I'm probably barking up the wrong tree here, but after making so many right choices and showing real wisdom in the new Mortal Kombat

's redesign, I'm thinking it might just be time for the game to ditch the shock value, promote the quality of the fighting, and grow up just a little bit more.

Korean Game Rating Board actually demanded remove that ultra-violence from the game, or don’t release it in South Korea. Inplay, local publisher of the game, explained it’s impossible to release it without the unique feature, and so GRB eventually refused rating of the game. Now Korean fans should buy imported version with expensive shipping fee…

If it was a choice between gameplay and ultra-violence in Mortal Kombat, then sorry Brad… Fatalities for me every time 😉 I’m aware it’s “rose-tinted glasses” at play here, but my first post-Sega Master System videogame memories are playing Mortal Kombat 2 on the Mega Drive at the age of around ten. Good times. In all seriousness, though, I think it’s great that the Mortal Kombat series no longer has to rely on ultra-violence as a crutch. If the game is better than the PS2-era games, then I’m in for a real treat, I thought they were excellent entries into… Read more »

Really??? No Fatalities? I’m a dad too. I won’t play until the boy has gone to bed. I thought it was a smart move removing them from story mode and when I played some arcade later it was so much fun to do them!

Like you say, you just ignore the fatalities and do an uppercut, so why take them out if people like them and it’s part of the franchise’s identity?

Hey Brad, I can definitely see where you’re coming from- playing through the story mode, I didn’t miss the Fatalties at all, mostly because it made the moments of ultra-violence within the story (like Jax’s arms being destroyed) carry that much more weight. On the other hand, I must say this: I played the newest Mortal Kombat with a couple of my buddies, and they haven’t played since MK4 on the N64. They found it to be remarkably similar to the old games, so they had no trouble picking it up and getting into it. That being said, viciously murdering… Read more »