Still working on Call of Juarez. I'm sort of split on it.

I like Westerns and this one is certainly a great deal better than the first in the series. I have a fondness for the characters, as well… the voice work is good and they fit snugly into the niche that cowboys and outlaws occupy in my mind. 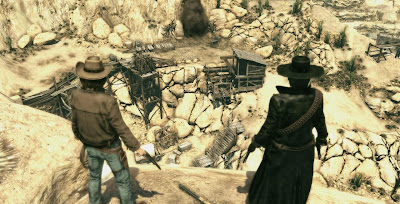 On the other hand, the gameplay just isn't that exciting, and although I have an enjoyable time while actually in the act of, as soon as I turn the console off and step away, it's as though the game has never existed for me. It instantly vanishes from my mind, and I feel no draw whatsoever to get back to it apart from the knowledge that I have a review due.

In other game news, I needed something to play on the PlayStation Portable since I knew I'd have some time to kill. Scanning the shelves of used titles (and trying not to imagine a future where this is no longer a reality) I found myself strangely attracted to Phantasy Star Portable.

Although I enjoyed a couple of the original Phantasy Star games back on the Genesis and spent some time with Phantasy Star Online, I can't really claim to be a huge fan of the series in its various incarnations. The more recent titles have been especially lacking in my opinion, and although Phantasy Star sorta paved the way for online console MMOing, the developers don't really seem able to keep pace with current trends for various reasons. 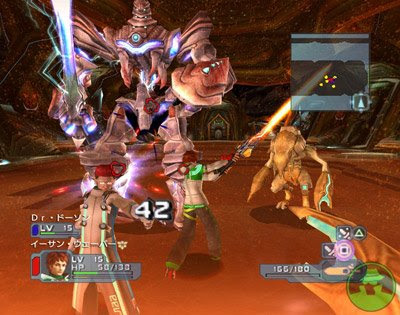 At this point you're probably wondering why the hell I was even considering Phantasy Star Portable, and the answer to that is: I have no idea. It just sounded good.

Chalk it up to a hormone imbalance, or malnutrition, or some other random thought-altering physiological state. Cosmic rays, perhaps. The lunar cycle? Anyway, I walked out of the store with it and put an hour or two into it.

I don't have a lot of thoughts on it just yet, although I will say that the character creator system is surprisingly robust. Featuring a lot more options than I would have expected, I spent a good deal of time tweaking my character and if nothing else, I give Sega huge props for A) including the option to create a plus-sized woman, and B) giving this female form a normal weight distribution instead of applying male body shape to a female character model. (Yes, it's true… not every male gamer finds the skinny-minnie Eastern quasi-jail bait archetype attractive.)

Oh, and the camera control and lock-on system seem to completely blow, although I'm not quite sure I've completely mastered the controls yet.

It makes me sad.

The original Phantasy Star games were forerunners of the traditional turn-based console RPG’s. There is a great universe to be explored and excellent story to be told, and it has been utterly abandoned.

I retain the slimmest of hope that someday a true PS RPG will be made that isn’t watered down by a lackluster online mechanism, and that a true console RPG will surface. I would love for it to return to what made PS great: a spectacular single-player RPG.

I have not played CoJ:Bound in Blood but i have a pretty good idea of what you are talking about. Had the same feeling with Saints Row 2 (co-op).

Really fun and enjoyable when actually playing but not really aware of it once the console was switched off.

You have to accept the game for what it is. It’s like that average quality hollywood blockbuster. You enjoy being there at the time but it will not be part of your medium-long term movie memories.

I still need to play Phantasy Star Portable–I love PSO so much I still play offline (I need an intervention, most likely…)

I’m just sad to see that it looks more like PSU than PSO. My PSO HUcast is a fucking beast and I’d love to recreate him.