Answer the call, but only if it's not using your peak daytime minutes 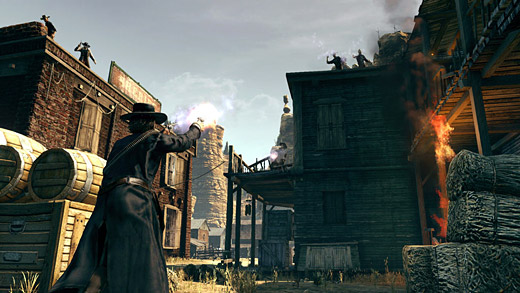 LOW The action never heats up past a mild simmer.

WTF Why are the one-on-one showdowns so sloppy, random and loose?

As a Western fan, I'm a little puzzled why it seems so difficult for developers to create outstanding games in this underserved genre. I mean, it seems like a straightforward grab: easily-defined stories, plenty of opportunity for action-oriented gameplay, and a near-total lack of competition. If gamers got a Stetson for every ten (or twenty) space marine helmets, I'd be a happy man. Perhaps the lack has something to do with the fact that games have to sell across the world and the Western is something intrinsically native to the United States, but I still believe that whatever the country of origin, it's hard not to appreciate a good rough-and-tumble Western. Polish developer Techland must agree, since they're trying their hand at nailing tumbleweeds and dust a second time with Call of Juarez: Bound in Blood.

A prequel to the first Juarez title, Bound in Blood tells the tale of Ray and Thomas McCall, two brothers who become fearsome outlaws after deserting their assignment during the Civil War. Leaving Atlanta to burn for the sake of saving their own family, their travels west eventually bring them into contact with a stockpile of three hundred rifles, an Indian chief hungry for war, and a Latin beauty whose presence can only mean trouble.

…Really, does a good Western need anything else?

Capitalizing on the setup, the best aspects of Bound in Blood by far are its story and characters. The game keeps the brothers together throughout the adventure, with their sibling chatter giving ample opportunity to display the above-average voicework. Although the dialogue falls squarely into expected channels, it's hard not to feel the sort of simple, world-weary qualities brought by the actors voicing the McCalls.

The plot itself would make for a fine film with its love triangle, revenge elements and ample gunplay. If the gameplay were removed and everything condensed into a CG film, I'd happily pop some popcorn and grab a seat. Although I freely admit to being predisposed to liking Westerns, it's impossible not to see that the developers clearly understand the classic qualities that need to be captured for any game strapping on spurs, and they've succeeded in doing so with genuine sincerity. It definitely feels as though the people behind the title have a love for the subject matter, and if nothing else, I appreciate it for that. 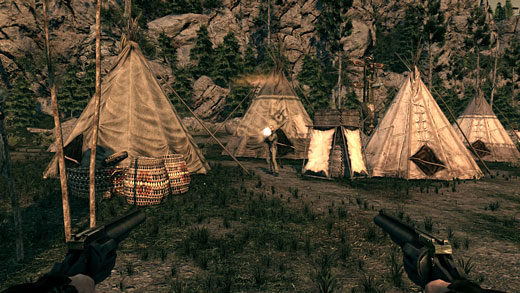 Looking at the rest of Bound in Blood, the cynical, analytical critic in me has to admit that the gameplay itself is no great shakes. It certainly gets the job done; there's no shortage of desperados to gun down and there are very few lulls in the action. However, Call of Juarez comes off feeling a bit shallow and underdone. Aside from choosing between the brothers before each level (Ray's tougher, Thomas uses a lasso) and taking them through heavily-scripted areas killing scores of henchmen along the way, there's not much here. It all starts to feel too samey, too soon. To be fair, it's true that there are a tiny handful of optional missions halfway through the adventure that break things up a tiny bit, but they're so minor and tacked-on, they're hardly worth mentioning.

Aside from a lack of supporting peripheral content, the core gunplay could use more polish. For example, when I shoot a man in the rattlesnake, I expect him to have some sort of reaction—a significant flinch, at the very least. When on horseback, it feels totally bizarre and inappropriate to be able to circle-strafe as ably as a character can on foot. It's not that anything here is necessarily bad or broken, it just doesn't hold together as tightly or offer as much depth as a game this focused should. If all I'm going to do is shoot, then the shootin' had better be damned fine. It's competent here, but that's all it is.

To be honest, I enjoyed every session that I spent with Call of Juarez: Bound in Blood and it's certainly a great deal improved over its predecessor. That said, as soon as I turned my console off, I instantly forgot that I had ever played it. I never found myself mentally reviewing my strategies or thinking about the levels I'd already seen, and I certainly never felt any rush to hurry and get back to it. It was far too easy to absent-mindedly postpone Bound in Blood play sessions, and this sort of vaguely amiable, yet forgettable identity isn't enough to make it stand out. Despite Techland's efforts, the Western genre is still wide-open for someone to ride in and claim it.  Rating: 6.5 out of 10.

Disclosures: This game was obtained via publisher and reviewed on the PS3. Approximately 8 hours of play were devoted to the single-player mode, and the game was completed one time. No time was spent in multiplayer modes.

Parents: According to the ESRB, this game contains blood, strong language, suggestive themes, and violence. Make no mistake, this is certainly a game aimed at adults. The core gameplay is all about shooting people, and the tone of the story is very harsh at times. There's plenty of salty language and although there is no graphic sex, the subject does come up a few times. Parents, keep your kids away from this one.

Deaf & Hard of Hearing: You are advised to stay away. Although subtitles are offered for the dialogue, I found that I often relied on the sound of gunshots to determine the presence of enemies. There are on-screen indicators, but they don't quite do the job. Besides that, the game features several one-on-one duels that are required to play through. Unfortunately, there are no visual indicators for these segments. If the player cannot hear the sound of the "go" bell, they have absolutely no way to know when to pull the trigger and will likely encounter extreme frustration. It may even be impossible for D/HH gamers to complete. This problem could have easily been fixed, but in its current state I would strongly recommend that anyone with hearing issues NOT play this game.