Started Call of Juarez: Bound in Blood on PlayStation 3 tonight. I was having a little trouble keeping my eyes open so I didn't play past the first two chapters. However, it definitely seems better than the first Call of Juarez so far. It's still not a graphic powerhouse, but the visuals have improved and I'm always a sucker for a Western (or Western-ish) setting.

The first chapter was pretty lame… it felt a little messy and confusing, and was the equivalent of a WWII trench battle set during the Civil War. Nothing special here.

The second level was much better. After the main characters desert from their unit, they walk back to their Southern antebellum mansion and fight off the Union. 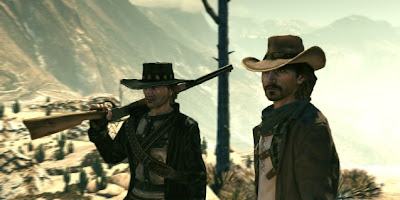 The generally open design of this level (not open-world, just open) and the main characters traveling through it with fields and wooden fenceposts in the background definitely hearkened back to a classic sort of Southern imagery which I definitely appreciated, and it was kind of a trip just to be playing characters fighting for the South at all.

At this point I'm not entirely convinced that the shooty gameplay will bring very much new to the table, but the unusual setting and gruff characters are keeping my interest.

I definitely recommend the recently-released Magic: The Gathering game on Xbox Live. 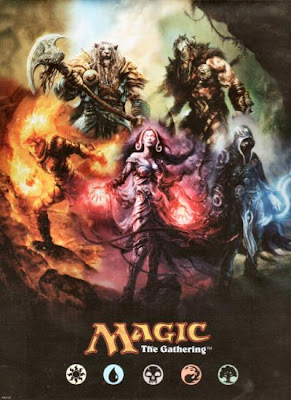 If you're a person who's ever been curious about playing Magic but didn't know where to start, it's an excellent introduction to the game thanks to a series of very comprehensive tutorials and the level of automatic help that the game provides.

If you're a person who's already experienced at Magic, you may find that the game is very limiting and feels unsatisfactory since the option to build custom decks is not available.

Players select from eight pre-made decks and can re-jigger a few of the cards in them, but basically, play is limited to these eight. Although playing under these conditions feels a little like trying to write a novel using only the first five pages of the dictionary, the fact is that Magic is an extremely overwhelming pastime to tackle, and narrowing down the options was a very smart move given that it seems fairly obvious the entire reason this game exists is to draw more players into the world created by Wizards of the Coast. 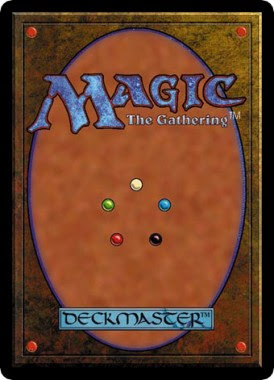 Reinforcing this theory, playing Magic over Live completely re-ignited my passion for the game.

I used to play it heavily, and spent a lot of my free time designing decks, collecting cards, and combing local shops for new additions. For various reasons I basically quit cold turkey, packed up all my cards, and haven't touched the game for probably six or seven years. Maybe longer. After playing just a few rounds of this electronic version, all the old cravings started coming back and before I knew it, I had a stack of cards separated into color-coded piles in front of me.

Interestingly, my seven-year-old was watching me play the game on Live, and instead of being completely bored way I thought he'd be, he was actively interested. He caught on to what was happening quickly, started asking questions, and eventually I had to pass him the controller and let him make my moves for me. When I mentioned that there were actual paper cards that went along with this game, his eyes lit up and the next thing I knew, the two of us were down at a local comic shop picking through a Commons box.

The intricacies and strategy of the game are still beyond him for the moment, but he's got a really good handle on the basics and has been very into playing real tabletop matches with his old man.

The Live version of the game may be kind of crippled, but it's still pretty fun and certainly served its true purpose—brainwashing the people playing electronically and sucking them into the five-color card-fueled whirlpool called Magic.