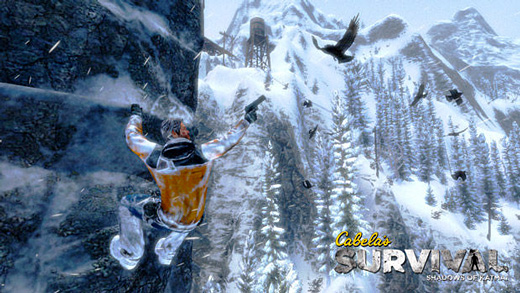 HIGH Stuffing a woman inside a moose to save her life, tauntaun style.

LOW Seeing some pickups on a cliff and having no clue how to reach them.

Everything that Sparky said in his main review was correct, and I don't disagree with a bit of it. However, I think there's also a secondary subtext beneath all the overt gun loving going on in Shadows of Katmai

If you ask me, the game is best appreciated as a total subversion of the subject matter and as both an homage and a takeoff of one of the most popular games of the current generation, Naughty Dog's Uncharted. Fun Labs's work is so stupidly clever and cleverly stupid that I can't help but see it as brilliant, winking, and inspired.

First and foremost, the game doesn't take itself seriously in the least, so neither should the player. There's no easy way to lug a thousand-pound moose carcass down a sheer cliff? Who cares, skip it! Shooting bears in a clearing isn't exciting enough? Have the bears tear down saplings and use them as baseball bats! Need to find vials of medicine scattered throughout the mountainside? Make the vials larger than the main character! If you ask me, it was perfectly clear to the developers that trying to blend a "hunting simulation" with a third-person adventure (for Cabela's, no less) was ridiculously silly, and rather than invent absurd explanations or include ill-fitting mechanics in order for it to make sense, they just decided to go crazy and have fun with it.

In fact, the biggest proof of this is main character Logan James's sidekick, a husky named Togo. This amazing, magical dog accompanies Logan for most of the adventure, despite the fact that Logan constantly free-climbs sheer cliffs and leaps impossible distances over bottomless chasms. How does Togo keep up? He just appears at the destination. Seeing this dog pop up everywhere with no difficulty is pure comedy gold, and was the source of much amusement. In fact, it's so goofy that when Logan decides to jump out of a gondola with a parachute strapped to his back and Togo held loosely in his arms, it barely even registers as a scenario that's completely insane—and that's awesome.

There are plenty of other comedic moments to enjoy in the campaign (stuffing a woman inside a moose Empire Strikes Back style was a personal favorite) but the same irreverence carries over to the more "realistic" hunting mode, as well.

In this part of Katmai, the player moves through the forest on rails and focuses on shooting every damned thing that moves. I hesitate to even call it a simulation since the player will be downing hundreds of waterfowl and any number of endangered mammals with impunity. If hunters in the real world killed at the rate and volume they do in this shooting gallery, heaps of animal corpses would pile up past the tops of the Rockies. This isn't hunting, it's a full-scale assault on nature, and no prisoners are taken. If I didn't see this as satire, I might be a little concerned about the mindset behind it.

Despite all of the clever nods and outright hilarious occurrences, it should be noted that Shadows of Katmai is rough around the edges when it comes to technical production, and lacks many of the smaller refinements that one could reasonably expect.

The complete absence of subtitles was a disappointing omission, and for a game with so much shooting, I was puzzled that there were no options to adjust the speed and sensitivity of the crosshairs. Some of the save points (campfires) were a little too far apart, and there were a few times when the game didn't register my attempts to grasp onto ledges. None of these are serious problems, but with just a little more effort, Fun Labs would have a perfectly respectable B-grade Uncharted—and in some ways, a game that's even better than the one that inspired it.

With its fast pace, pleasant lack of padding, and absurdist humor wrapped up in an outdoor adventure's trappings, Cabela's Survival: Shadows of Katmai

ended up being a complete surprise that was an order of magnitude more enjoyable than I would have ever expected. The only thought on my mind after bringing the game to its conclusion? Please let there be a sequel. Rating: 7.0 out of 10.


Disclosures: This game was obtained via rental and reviewed on the Xbox 360. Approximately 5 hours of play were devoted to the single-player mode, and the game was completed. No time was spent in multiplayer modes.