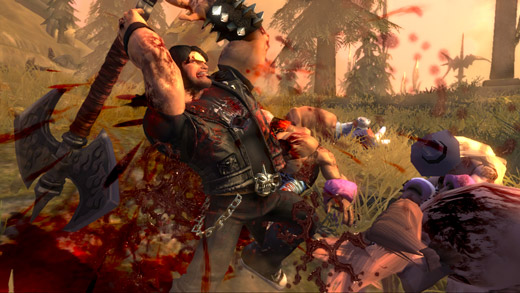 Wrapping up my must-plays of 2009, I currently have Brütal Legend in the 360.

At this point, I'm fairly sure that everyone who would take the time to read this blog already knows everything they need to about the title, so I'm going to skip any unnecessary introduction.

Getting right to it, I must say that this is a most perplexing game. I would have loved to have been in the development meetings for it, because I really can't conceive of how it came about.

Tim Schafer is a brilliant guy and I have tons of respect for him, but he's just been off lately. I don't care what anybody says, Psychonauts was a big bag of fail to me, and although Brütal Legend is better, it's still not anywhere near what it could've been. In fact, I'm not even really sure what it is.

What I do know is this: the game's use of heavy metal imagery is pretty boss, and the art design team was on point when they were putting the visuals together. Having grown up when people were still wearing Iron Maiden, Judas Priest and Metallica shirts in an entirely un-ironic sense, a lot of the elements work for me in a big way and I think it's pretty cool.

The soundtrack (naturally) is also equally cool. Tons of great tracks from legends of the genre play as you drive across the landscape or attack enemies, setting the perfect tone. I'm not exactly sure how Def Leppard got into the game, but I'm willing to overlook it.

Everything else is basically one giant WTF.

Granted, I haven't completed the game yet. Taking a quick look online, it seems I only have two missions before I catch the credits, but nothing could happen in the remaining span of time to bring all of the disparate elements together.

For starters, it seems to be a common theme that people praise the game's story and characters, yet I have to wonder if I'm even playing the same game. Jack Black's character Eddie Riggs is fine, but every other member of the cast is a quick sketch in a plot which has basically no impact whatsoever. For example, the main love interest is feeling put-upon and derided for reasons that are never quite explained clearly enough, and then she vanishes, only to return as a nemesis. It's a classic move, but it only works if the player is invested enough in the character to actually care about what's going on. The motivations on either side are never explained satisfactorily, and I had a hard time figuring out where the drama was. In general, events happen so quickly and with so little scripting to support them, I'm kind of wondering why they even bothered with a story arc at all.

I also take real issue with the way the game's true RTS identity was concealed for so long. I think it's fair to say that everyone who had been following the game was expecting the type of hack-'n'-slash adventure that's portrayed in the brief tutorial segment, and not the chaotic, poorly-controlling and messy troop-management contraption that we got. I'm not the biggest fan of RTS games to begin with, and what's on display here is pretty poor. The fact that the player's character has to be physically near troops in order to give orders is a sizable mistake, and the fact that there is no on-screen mini map is another.

Finally, I have to say that I don't think that the open-world platform adds anything to the Brütal Legend in the world except to find random collectibles or partake in repetitive side quests, and it seems the game overall would have been better off without it—although without the structure and quests, the game would take about experience. There is nothing to do four or five hours to complete. I'm not saying that I think the game should be longer just for the sake of being longer, but adding all of this peripheral stuff just to be able to claim a longer playtime seems misguided. I'd trade it all for a more tuned, reshaped critical path.

I have to admit, I find it somewhat ironic that this game found itself in the middle of a contentious legal battle over publishing rights and had such a troubled path to retail only to finally see release and effectively bomb. It was somewhat optimistic to think that a Schafer game would achieve mass popularity even under the best circumstances, so the unsatisfactory gameplay and the concealment of its true nature were just final nails in the coffin. I really want to like Brütal Legend a lot more than I do, but in all honesty, it's a giant whiff at bat.

I’m laboring through Brutal Legend right now as well and the thing that surprises me is how it feels like the developers made this game in a vacuum. How else do you explain the painfully bad gameplay? Dynasty Warriors Empires has done the hack n’ slash combined with strategy elements for years and does it so much better than Brutal Legend. If they were going to expect players to make tight strategic controls over individual units, they should have done it in a paused map screen.

Don’t get me started on how gimped playing Eddie feels.

“I also take real issue with the way the game’s true RTS identity was concealed for so long. I think it’s fair to say that everyone who had been following the game was expecting the type of hack-‘n’-slash adventure that’s portrayed in the brief tutorial segment, and not the chaotic, poorly-controlling and messy troop-management contraption that we got.” I simultaneously agree, detest that this was concealed by EA for so long… and cannot fault them for it. Because over, and over, and over again the same refrain has been heard: The moment people learned it was an RTS, everyone lost… Read more »

joe [to be determined]

“Psychonauts was a big bag of fail to me” Pushes Brad out of the way of the GIANT bus that is about to hit him. I was in the video rental store today. I was there to get Brutal Legend, but it was rented out. They had Assassins Creed 2, but I have decided that is not even worth a rent. Brutal Legend, I have seen this thing played. I’ve played the demo. I’ve heard about the RTS. The decision has been made, I am going to play it. Its just a matter of getting my hands on a copy.… Read more »