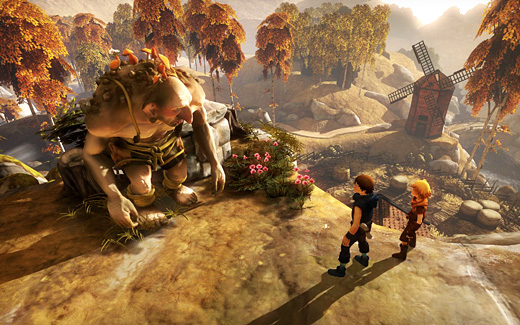 LOW The last scene of the game seems slightly misplayed.

WTF Who keeps cutting all the rope ladders in half?

Recently, I've been hearing a growing amount of discussion on whether "traditional" game design can truly mesh with and support an involved, mature sort of storytelling. In essence, it's becoming more and more noticeable when lofty concepts are bolted atop the same old mechanics, and the ultimate vision of something is compromised by the need to collect a million widgets or shoot a million enemies.

Although I don't think the classic forms will (or should) ever go away, the mismatched feeling between what a player is asked to do and what a story is trying to say is something I've often been bothered by. So, it's a delight when I find a title that resists traditional thinking in order to deliver its message in a clear, concise way. Brothers: A Tale Of Two Sons is one such game. I haven't spent time with anything in recent memory that breaks away from tradition more than this does, and in doing so, finds wild success.

Penned and led by award-winning Swedish director Josef Fares and developed by Starbreeze, Brothers is the story of two sons who've lost their mother, and unfortunately, their father is now rapidly dying from an unnamed disease. The big brother in blue and the little brother in orange learn from the village alchemist that there's only one thing that can save him, so they set off on a journey to recover this thing and bring it back.

It sounds like a fairly standard premise that might serve in any number of character-based action games, but as I said earlier, Brothers deviates so deeply from the norm that it's clear from its first moments that the audience is in for a far different sort of experience.

For instance, the storytelling. The characters speak an unintelligible fictional language, and there are no subtitles. All communication happens nonverbally, through facial expressions, gestures and intuition. Although it's not bleeding-edge photorealism, the developers do a wonderful job of conveying personality and emotion in the brothers and everyone they meet, and it reinforces the notion that video games are a visual medium.

This emphasis on showing and not telling avoids the notorious bad habits of some narratives, such as drowning players with volumes of text or leaning too hard on incongruous audio logs. 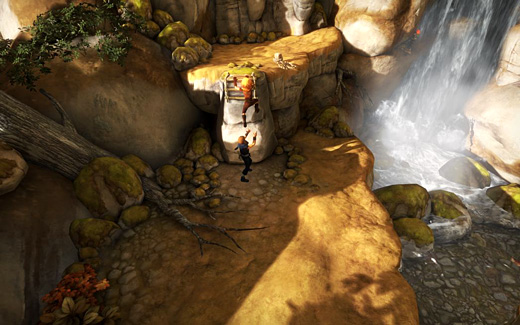 It can be more than a little mindbending to operate two characters at once, especially when one brother needs to perform an action that's totally different from the other. In fact, it became a sort of meta-challenge for me to move both characters around the world in such a way that it looked natural, without having one bump into a wall or the other veer off in the wrong direction.

Turning a crank with the little bro while also making sure the big bro doesn't get crushed in a machine might make some go cross-eyed for a moment, but Brothers is more successful than other titles that have tried dual-character control thanks to simplified challenges which aren't too complicated, yet remain complex enough that a solid amount of concentration is required to perform them successfully.

To the game's credit, there are a number of creative uses of the dual mechanic throughout the adventure, such as using the pair to shift weight on a hang glider, using one as bait while another traps a baddie, or stringing a rope between them and swinging one to a distant handhold while the other acts as an anchor. I kept waiting for the developers to run out of ideas before they game ended, but they never did.

Impressively, Starebreeze wasn't content to stop pushing the design envelope with the aspects I've already mentioned. No, they went way out on a limb by including no side-quests, no items to collect, no health bars or resources to manage, no stats, skill trees or combat, no online multiplayer and no downloadable content (DLC). Instead, Brothers focuses on the story it wants to tell—the journey of the brothers as they travel the land and overcome the challenges along the way—and anything that doesn't fit gets cut. It's hard to express just how effective this laser-tight focus is, but thanks to this purity of creation, everything comes together to deliver an experience which is poignant, deep and emotional.

The world these brothers inhabit possesses a magical, fairytale-like quality, and although things start out simply enough, the level of wonder and surprise grows stronger with each passing moment. I never knew what was going to happen in any given scene, or even what could happen, and that quality is something I find to be quite rare these days. I hesitate to share any details or specifics for fear of spoiling the wonder of discovery, but I will say that I absolutely respect both what Brothers is going for, and the path its narrative takes to get there. Certain scenes near the end of the game were quite touching, and not something I'll forget anytime soon.

As I write this review, I have to admit that the lack of PR and very little word-of mouth has me worried that Brothers: A Tale of Two Sons will get lost in the shuffle, and that would be a terrible outcome. Developers as brave as these should be recognized and celebrated for their efforts, and players who crave something deeper and more meaningful than another shooter with talky cut-scenes would do well to take this journey. Rating: 8.5 out of 10.


Disclosures: This game was obtained via publisher and reviewed on the Xbox 360. Approximately three hours of play were devoted to the single-player mode, and the game was completed. There are no multiplayer modes.

Parents: According to the ESRB, this game contains: blood, crude humor and violence. Although the tone for most of the game is light and fantastical, it does turn rather dark at the end. There are a few isolated instances of blood and violence, but it's rather tame compared to most. However, I would recommend parents sit with young players and talk them through some of the scenes, and steer even younger ones away entirely.

Deaf and Hard of Hearing: There won't be any problems here. There is no intelligible speech in the game (the characters speak gibberish) and there's not even any text. All communication happens through facial expressions and physical gestures, which is absolutely perfect for sign language users or those with hearing impairments. It's totally accessible.

I was interested the moment I saw this game on my 360 dashboard.

what im wondering is, is there any way you could see this game being played by two people on one controller? I’ve heard the controls are simple and its just stick and trigger and if that’s the case I would definitely try and get my girlfriend to play along!

You’d have to sit pretty close together and it might be a bit awkward, but you could do it, for sure.