Tonight, we revel in part three of Broken Love. 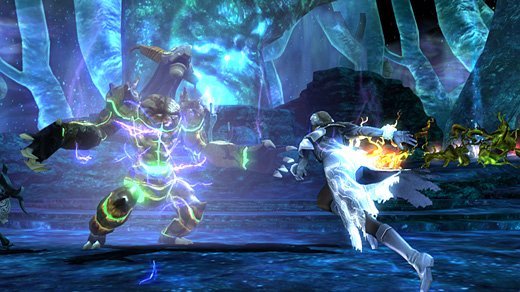 It's a well-known fact that Japanese role-playing games (JRPGs) have been on their last legs for years now. Ever since we entered the current console generation, Japanese developers have struggled without success to bring us a truly mind-blowing next-gen RPG experience.

Even as a die-hard fan of the genre, I can admit that they're starting to feel stale—it's as though Japanese devs are kicking and screaming like an impertinent child at the thought of moving away from the formula that produced so many gems back in the day. That's not to say that there haven't been some great new additions in recent memory. Folklore is one such title—an overlooked action RPG that despite its flaws, remains at the top of my favorite JRPGs of this generation.

Folklore received heavily mixed reviews upon its release back in 2007. Though it was praised by many for its dark atmosphere and emphasis on lore, it was hit hard by some for its incessant back-tracking, messy storytelling, and hit-or-miss Sixaxis controls. Though it was never deemed a complete failure (and surprisingly, got more than a couple 9/10's) there was something about it that doomed it for the bargain bin. Now, five years later, this wholly unique PS3-exclusive has been all but forgotten.

It's hard to put Folklore under a critical eye and not find a number of glaring flaws, but even for what it does wrong, Folklore exudes charm. Not often do you find a dark (both literal and figurative) JRPG that doesn't focus on a teenage prettyboy protagonist off to save the world. No, Folklore deals very intimately with themes of death and loss, and even throws some murder mystery into the mix. Aside from that, Folklore's greatest legacy is in its atmosphere. From its Celtic-inspired score to the foggy town of Doolin and the various Netherworld realms traversed over the course of the game, Folklore has a tight and cohesive vision that utilizes western mythology and locales unlike any other seen in a game coming out of Japan.

The gameplay requires players to capture and utilize the powers of various creatures found throughout the Netherworld, each with its own unique ability and powers that can be leveled up. It's an intriguing take on the traditional action RPG. I'd also say that never before (or since) have we seen the Sixaxis used in a way that feels so integrated into a game, rather than just being a token add-on.

It breaks my heart that Folklore never saw the sales or recognition that it deserved. Even with its numerous flaws, it remains the most unique JRPG offering of this generation in my eyes. Japanese developers would do well to take a closer look at all the things Folklore did right and expand upon them—if they did, I dare say we'd start seeing some new and intriguing JRPGs at last. 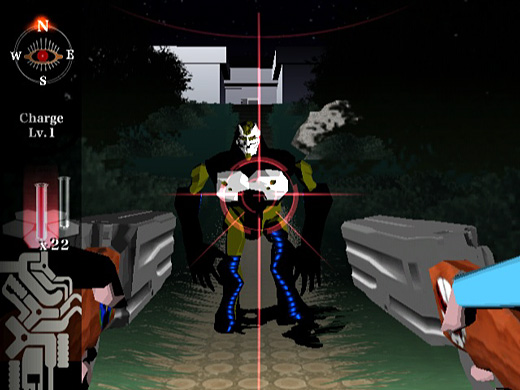 It would be easy to dismiss Killer7 as a game where the style overwhelmed everything else. The gameplay is a bizarre hybrid, fusing first-person shooting with on-rails exploration and some of gaming history's dumbest puzzles. The intense cel-shading gives certain levels an almost abstract look, and this disorienting quality is only enhanced by the game's ostentatiously bizarre story and ideas. To reach the end of most levels, the player must pay a bouncer a tooth to enter a nightclub linked to a parking lot linked to the next room of wherever he just was. Also, he must shoot the naked purple people in their weak points before they explode and kill him.

The shooting is done by the Smith syndicate, a group of seven assassins with different talents and weapons who transform into each other by bursting into clouds of blood. This seems quite normal, in comparison to their support staff and enemies. The helpers include a manservant in full bondage gear, a rapist nurse/maid, and several blood-spattered ghosts who seem to be reading a double-babelfish of their dialogue through a voice scrambler lodged in a garden hose. The enemies include a pedophiliac organ-harvester, the entire nation of Japan, and a cult messiah in a space suit.

For a game about assassins, Killer7 has surprisingly miserable combat. It's genuinely amazing that the same team that made the outstanding, clever boss fights of No More Heroes produced the inscrutable, frustrating encounters that populate Killer7. Most of these fights aren't even bad in some way that serves a symbolic point; they just seem to have been made by people who had no idea what they were doing. The need to stand still while shooting gives the gameplay some similarities to the contemporaneous Resident Evil 4, but the on-rails movement made Killer7 inflexible and sometimes needlessly difficult, even if it did allow for some neat camera angles.

Despite its flaws, Killer7 bristles with moments that confound and amaze, revealing new layers of meaning each time I play it. Its mechanics at least succeed in getting the player to understand the Smiths, making each one seem real and unique, and the game's climax is all the more affecting as a result. Killer7 is a work of art that could not have been expressed as effectively in any medium other than the video game. Although the title is difficult and demanding, any player willing to surmount its barriers will find himself richly rewarded. 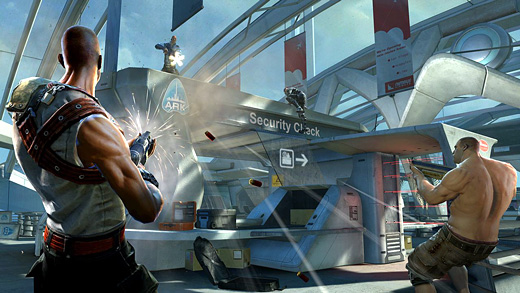 "It's complicated" isn't just a Facebook relationship status; it's also the quote I'd put on the back of the box for Brink.

Having bought the game at launch, the full price of $60 initially left a bitter taste in my mouth. The game was broken, and that's a statement made after installing a day-one patch. Maps wouldn't completely load, for instance, and getting kicked out of games was fairly common. There's a litany of other issues, too: terrible AI, a heavy handed tutorial, and weapons that feel like they were pulled from a cereal box all mar any potential enjoyment… Hardly a review that'll have a box quote pulled from it.

Six months after release, Brink clicked. To put that into perspective, that's was in the midst of "Game Flood 2011"—the time when AAA titles hit store shelves with a fury. After blazing through shooter after shooter, I stumbled back into Brink one night. The art style alone is refreshing: it's a little Borderlands and a little Gears of War. Aesthetic's one thing and how it plays is another.

Everything Brink offers players is an attempt at making sure goals are met (and not killing everything in sight) is rewarded. Whether that's the "S.M.A.R.T." moving system with an Assassin's Creed flair, ensuring class differences don't revolve around the firepower of weapons, XP incentives or offering multiple objectives, it's obvious Brink isn't your typical shooter. Where Brink really sunk its teeth into me was in requiring teamwork.

In other shooters, a single player can drastically alter the flow of a match. Not so here. Teamwork reigns supreme; trying to go it alone will result in a massacre. Squad versus squad is, for me, far more interesting than constantly attacking. Brink isn't a twitch shooter any more than Call of Duty is an indie game series. Skill and teamwork are rewarded, and unlike its closest relative, Team Fortress 2, there's not a market economy revolving around head-wear. That may turn some off, but, for me, it means play reigns supreme. It's a bona fide game.

Far from the one night stand I had with the latest Battlefield and Call of Duty installments, I keep coming back to Brink after an extended courtship period that's turned into a nice dinner and a glass of wine in the early evenings. Yes, she's an abusive one: at times, even brutal, but I'm a sucker for a bad romance. 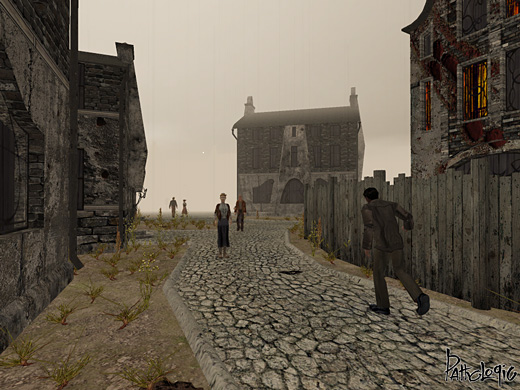 The semi-broken game that holds a place in my heart is Ice-Pick Lodge's 2005 game Pathologic. It's a game in which you play as a healer in a turn-of-the-century Russian town that is stricken with a deadly plague. Your job is to find out what's going on, and cure the illness. The catch—you have twelve days to do it in, and every morning you are given a new person to save and new quests to complete in those 24 hours.

It's semi-broken as an Englishman because its translation is a mess—lyrical and alluring at best, incomprehensible at worst. It's also because the user interface is a confusing mess and its atmosphere is so dense and muggy that the feeling of bleak drudgery it etches out in the narrative is achieved just a little too well in the gameplay. The graphics (despite brilliant art design) are clunky, and the difficulty will be prohibitive to most players. However, the game offers a redeeming factor to help balance out each one of these flaws.

For instance, the game is a beautiful blend of narrative and ludology. There are hard decisions you must make every day for survival that trump any little-sister moment in BioShock. For example, will you sell your gun to buy bread today before its value skyrockets the next day and you starve? Will you kill a man to eat? Will you trade razorblades for medicine from a child? Will you dig about in trashcans in full view of people?

The plot is admirable and the execution is just as good—the whole story is presented as a play within a play, with directors and understudies around every corner to explain to you your role in events. The interface is confusing, but the map in particular is the focus of an amazing fourth-wall breaking event late in the game which made all my problems with it dissipate in amazement.

Overall, I'd compare it with something like Twin Peaks at its darkest in terms of the background atmosphere. That's how dark it is. This game is truly survival horror, with a capital S on survival. I could go on for pages, but I will say only this: buy it, try it, and even if you don't get as much out of it as I did, it will be a unique experience you will not find anywhere else.