Have you ever had a game that you just knew was going to take serious effort to complete, but you dug in for the long haul and stayed with it until the end? I'm not talking about the average (and tedious) 60-hour Japanese role-playing game (JRPG) or anything that's a simple matter of hours devoted. No, I'm talking about something that's really difficult, or something that presents some sort of extraordinary obstacle to overcome. Something like the video game equivalent of a brick wall.

The first brick wall (believe it or not) was the original Mega Man on the Nintendo Entertainment System (NES). It may seem a little ridiculous that this game was such a huge hurdle for me back in the day, but it's true.

Getting through the bosses was no big deal, but the fight against Rock Monster drove me absolutely crazy. The way that thing split up into small pieces and warped back and forth across the room just tore me apart, and with the game skills I had at that age, I just couldn't do it.

I don't think I've ever mentioned this to anyone before, but it took me about three years to get past that part. Of course, it wasn't three years of trying ten times a day every day. I'd put it down for a few months and play other games and then come back to it when the mood struck me, but I did not see credits roll on Mega Man until literally three years after I bought it.

… of course, after I finished it legitimately, I found out there was an exploit to get past the bastard by hitting him once and then rapidly pausing/unpausing the system. If I had known about it earlier, forget three years. I would have polished the game off in three days. 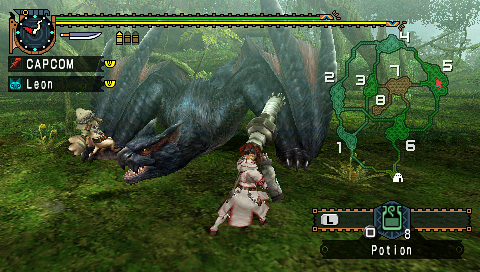 My other brick wall is Monster Hunter Freedom Unite on the PlayStation Portable (PSP).

If you read my blog regularly, then you already know that I'm a recently-converted fan of the series. Monster Hunter Tri on the Wii got a lot of things right for me, and I still had a bit of an itch to scratch after I polished it off. I knew the PSP games had a dedicated following, so I figured I'd jump onboard that train and kill more giant beasties while on the go. Immediately after starting, I was glad I did.

Despite enjoying it a great deal, Tri felt like a stripped-down, über-simplified kiddie pool compared to the amount of content I found in Freedom Unite. There are a ton more monsters, loads of new and different weapons, and a mountain of varied armor sets to collect. Interestingly, Freedom Unite also has tons of information, tutorials, training arenas and lots of other little bits that are completely omitted from Tri. When I saw how much was here, I was utterly amazed and quickly fell in love. Any way you slice it, Freedom Unite is just a better game, all-around.

Better all-around… except for the camera.

While it's clear that Capcom has made some concessions to PSP players (i.e.- slower monsters, lower difficulty) the fact is that Sony's handheld is physically lacking a second analog nub to handle camera duties and the Monster Hunter developers have never come up with a satisfactory workaround solution.

What are the options? Players either constantly click the left shoulder button to auto-center the camera directly behind their character, or they can control character movement on the nub with their left thumb while pushing left/right on the D-Pad with the left index finger. This tendinitis-inducing maneuver is "affectionately" known as the claw. Also, it's about four times more uncomfortable than it looks, especially in extended play sessions.

As I'm sure you can imagine, the giant hurdle to overcome with Freedom Unite is finding techniques and strategies to survive while dealing with the absurdly unsatisfactory camera system. If it was any other game I probably would have kicked it to the curb after an hour, but it's impossible not to acknowledge the amount of quality content in the title. It really is a fantastic game for players of a certain stripe, and if there was some solution to the camera dilemma, I'd easily rank it as one of the best games available for PSP.

Unfortunately, this is a game where even half-seconds count, and being unsure of whether a Tyrannosaurus with wings is on your right or your left is more than enough to trigger a "Mission Failed". Death by crappy camera is frustrating in the extreme, and I have questioned my own sanity more than once as to whether I'm really dedicated enough to see this game through. After forty hours, I think I am… although whether that means I'm sane or insane, I can't say.

So, what are your personal video game brick walls? I'd love to hear about 'em.

2nd level had that construction site where you had to run around defusing bombs before they went off, I remember trying it dozens of times before I gave up with a whimper.

Upset me too, because being a huge GITS fan, I thought the Tachikoma’s jumping spider movement was implemented quite nicely.

There was a few NES and Master system games with rather bad pacing that I just could not continue playing(whats was the multi family member side scroling action RPY thing on the early NES?).

Any the only new game that I quite was FF8 it was getting to dumb, then I found the code breaker and all the bad games became fun a shame bad games can not be fun anymore…..

Definitely Ninja Gaiden. That level leading up to the final boss stymied me for a very long time and cost me money when it came to replacing broken controllers. Those fucking birds are so goddamn cheap…I still get pissed just thinking about it.

Hoenstly, when I beat the game (finally) I considered smashing the cart to pieces just so I’d never be tempted to subject myself to that torture again.

Ok, mine as a kid was Ninja Gaiden. I rented or borrowed it a ton of times. While I did get stuck a few different places on the way, the lead-up stage to the final boss is infamous. It’s a pretty unforgiving bit of platform memorization, and you need to save a decent amount of life left at the end to try the boss. Because until you get his tricky movement pattern down, Jaquio’s first form (of three!) is basically about trading blow for blow. Probably the first game that made me appreciate difficult games. Finishing that story was worth… Read more »

Haha, a couple of good choices above my post with that boss in Sonic 2 (I had it on Mastersystem myself, and found it equally as frustrating, especially as a kid!), and Battletoads (dedication to anyone who can play that, seriously!). I’ve had many brick walls in gaming over my many years enjoying this form of entertainment, but my most recent one is StarCraft 2 on PC. There’s one specific achievement I need on the very last mission on hard, and it really has me beat at the moment. I’ve tried so many times I’ve lost count, and yet I… Read more »

Mike Tyson in Mike Tyson’s Punch-Out. That guy is so fast and his pattern changes from round to round and during rounds. Those dynamite punches he starts out with are lightning fast. I never could beat him as a kid, even though I tried and tried. I usually could not get past the first round. I was about 9 at the time. Then about 11 years later I discovered the joys of emulators (which I don’t approve of now, but I didn’t know any better at the time), and I decided it was time to put Mr. Dream to sleep.… Read more »

a literal wall i hit way too often: the slalom section at the end demanded perfect timing and i never was able to beat Battletoads. Geometry Wars 1 Took some hours to get 11 of the 12 achievement. Took many more hours to not get the last achievement. So far… i haven’t given up yet and will try it again later. Bayonetta At the end of normal i was ready for hard, and at the end of hard i was ready for climax. The game was a series of walls, but it made me lower my head and just run… Read more »

My first – like you, as quite a young gamer – was the first boss in Sonic 2 on the Game Gear, an orange robot crab: We drove to the South of France each summer for a camping holiday, and it took several years of on-off attempts before I could finally beat it consistently. Of course, when I unlocked the Game Gear Sonics as a bonus in a GameCube game (years later!), it turned out the boss is actually a bit of a pushover to an adult. Some of my toughest challenges have come in role-playing games, often courtesy of… Read more »

Starcraft & Starcraft: Brood War for the N64 It took me FOREVER to beat that game. I was only a preteen when I bought it, and some of those missions kicked my butt. Losing a mission I had been playing for two hours (Save…what’s that?) would make me stop playing the game for a good few months. The worst was Mission #8 for the Zerg in the Brood War campaign, To Slay the Beast. It took me at least a year to beat that mission. After that, I sailed through the final two missions. It was such a great feeling… Read more »