Have you ever found yourself playing something that you weren't really crazy about, but you played it anyway? There are lots of reasons for doing so… maybe you spent the last of your budget on a title that the reviews were far too kind to, or maybe there's nothing really hot or exciting on shelves and you've got nothing better to do. Whatever the case, I imagine that anyone who plays games finds themselves in that same position occasionally. That was the situation this afternoon. 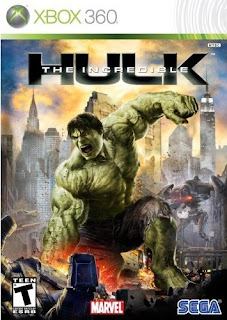 A while back, I had picked up a copy of The Incredible Hulk (Xbox 360) for something like ten bucks. I've been a Hulk fan for a long time (since Mignola was drawing the comic in his pre-Hellboy days) and I've never felt like any of the games have ever done the big green guy justice. This one didn't either, but there was some amount of mindless fun to be had by leaping around the open-world city and smashing things at random. Not a lot of mindless fun, but some. I think I got through about half the title before getting bored with it and putting it aside for a rainy day.

It just so happened to be raining this morning. 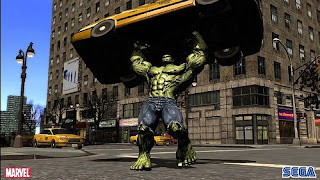 Time spent away from it had replenished my patience for the repetitive gameplay and simplistic design, and I had every intention of pushing through and finishing it, just to say that I did. I would have, too, until I hit one of the most poorly-designed, completely aggravating bosses I've seen in quite a while. (The Stark Industries Hulkbuster, for those of you who’ve suffered through the game.) 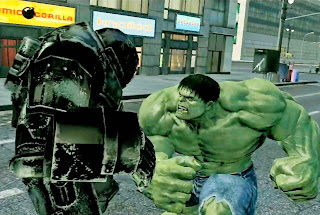 When you see this guy on the left, just turn the game off.

When stuff like this happens, I really don't get it. I mean, the game is pushing no boundaries whatsoever in terms of what it's trying to accomplish, and the vast majority of missions were complete pushovers. Pick up item here, carry it there. Go to this location, destroy everything. That kind of stuff. It's not really challenging intellectually, and it's not even very interesting, but on a day like today, I was okay with that. Then, out of nowhere the developers get some wild hair up their ass and decide to come up with a boss that completely breaks all the rules that the game has established up until that point. I'm not going to go into the details of what made this battle so infuriating, just take my word for it when I say that it was needlessly stupid.

I tried a couple more times after failing miserably, and when I finally figured out what needed to be done, I decided that it wasn't worth the effort and plucked the disc out of the console. I'm not a quitter. I have no problem putting out effort when it's warranted. Any level of challenge is fine as long as I feel like the game is meeting me halfway, but on a two-bit clunker like Incredible Hulk, pulling out a boss like that is just flat-out insulting… if you're going to make a cheap, crappy game, then at least make it so that I can play the entire thing with a minimum of effort.

I probably would've hung in there and kept going back in my younger days, but I'm older now and my free time is worth a lot more to me. My game priorities have changed. I don't need to prove anything to anyone (including myself) and if a game doesn't bring something to the table, I don't need to sit there and eat it.

Honestly, some games just aren't worth it.

UD was good (and probably the best out of all of them) but i remember getting pissed off at some of the later bosses and never came back to it. oddly, the same thing that happened with this iteration of the Hulk.

the problem with these Hulk games is the same thing that happens with Superman, or really, any other superhero. how do you make the game challenging when the main character is so tough or indestructible? sadly, the answer seems to be cheap boss design.

No love for Ultimate Destruction? I thought many people were pleased with that one and would be considered “the” Hulk game of choice.

I felt the same way when I played Crackdown-repetitive in just about every way and not really all that rewarding, but I had to finish it. Maybe it was because the 360 was fairly new at the time and I was wanting an excuse to play the damn thing, but I found myself enjoying the game without really knowing why. It still sort of bugs me 😛