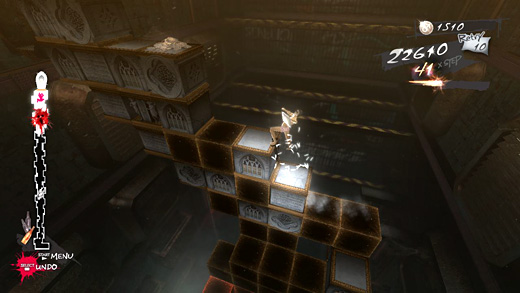 Not a lot to report at the moment.

Non-game work has been keeping me pretty busy, and since it's summer, the kids are active all day long and go to bed later than usual. Since I don't play single-player or violent games when they're around, my hours for burning through "grown-up games" are limited.

On the one hand, it's not too bad since there is a bit of a lull in the release schedule and the other writers at GameCritics have been able to cover what needs to be covered. On the other hand, my attempts to whittle down the backlog are going pretty slowly… I think I need to start drinking a lot more coffee at night.

Anyway, looking at the upcoming release schedule, it looks like Catherine, El Shaddai and Deus Ex: Human Revolution are the next things I'm looking forward to, and there's still a couple of weeks until the first one hits. With any luck I'll be able to get back to (and polish off) Lost Odyssey and Portal 2's multiplayer mode.

After being on hiatus for quite some time, I'm finally going to get back to the final edits of Speaking in Forked Tongues.

I started the project when I had regular evening hours to devote to it, so now that my schedule has shifted around a bit, it's been tough to find time when the house is quiet enough to write and I'm still awake enough to do so competently. Not trying to make excuses here, but I do admit that it's been personally challenging to stay focused and motivated with so many distractions.

All that aside, I think the time is right to plow ahead and get it done. If I writer-up and do at least a chapter a night, I think I'll be able to put a ribbon on it within the next month.

I can't remember who originally tweeted it (and apologies for not being able to credit you, whoever you are) but here's a link to a pretty cool site where a guy is creating 8-bit images using chain-link fences and colored plastic cups.

I wish he'd come up to Seattle and do a few fences around here.

Just a heads-up that Torchwood: Miracle Day mini-series will be premiering in the United States on July 8 on the Starz channel.

For those of you who don't know, Torchwood is the "after dark" spinoff from Doctor Who. Featuring rogue from the future Captain Jack Harkness and the rest of his extraterrestrial investigations crew, the show ran for two seasons and had one previous miniseries. While the seasons themselves were wildly uneven, the miniseries (Children of Earth) was one of the best pieces of science fiction I've ever seen. Not even kidding about that.

Early reviews for Miracle Day have been glowing and Captain Jack is one of my favorite characters, hands-down. I am most definitely looking forward to Torchwood's return to the small screen! Check it out when it hits, and for those of you who've never seen it before, the entire run of the program was available for instant-watch through Netflix last time I looked.