What will the Ducks Reveal? 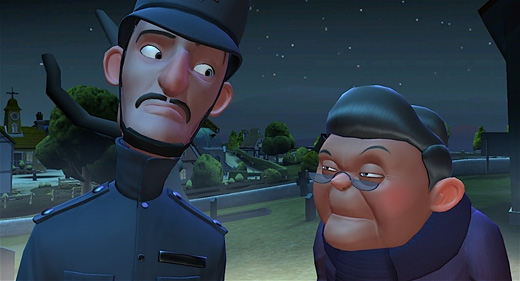 LOW Trying to understand the convoluted plot reveal in Episode 4.

Players who took the trip to Little Riddle in the first three episodes of Blue Toad Murder Files can now return to England's deadliest township and get to the bottom of murder most foul—the final three episodes are now available via Sony's PSN service.

For those who haven't played the first half, Blue Toad Murder Files is a six-part puzzle game that places players in the role of a detective on holiday in a small English village. After disembarking from the train, the rustic peace is broken almost immediately thanks to a series of crimes. In Episode 4, players must figure out who pushed a deadly stone from the top of the church tower. In Episode 5, players must figure out who… tracked mud onto a carpet. (Yes, really.) Episode 6 brings the overarching mystery to a close.

After playing through all six episodes, I remain divided on Blue Toad Murder Files. Essentially: I loved the presentation, but the gameplay needs work.

Starting with the good, each character in the village is just that—a character. Somewhat akin to watching some absurd BBC comedy, the developers have crafted fairly lengthy cut-scenes between puzzles, and the writing is quite good. Full of funny quips, odd accents, and plenty of personality, I grew fond of the cast of characters almost immediately, and their appeal only grows as the game progresses.

Really, it's hard not to like a vicar with a relationship to the dark Elder Gods, an Inspector whose favorite (and overused) word is "sharpish," or the butcher who thinks everyone is scum. They're all great folk, and Blue Toad Murder Files does not lack for charm. However, though these cut-scenes and characters are strengths, I can imagine many players having their patience tested by the relative infrequency of  playing.

Each episode offers twelve challenges, three memory checks, and one opportunity to choose a guilty party. Some of the puzzles are pleasantly challenging, a few are horrid, but any way you slice it, sixteen chances to actually play the game isn't a lot. More than anything else, a session of Files feels like watching TV and being occasionally interrupted.

Compounding the situation is Blue Toad Murder Files' approach to multiplayer. Clearly positioned to be a multi experience, extra players actually reduce the amount of gameplay per person—rather than having all players involved in each puzzle, the puzzles are divvied up between them. For example, when player one is trying to move a set of colored coins from one side of a board to the other, player two (as well as three and four, if they're present) can do nothing but observe. Once the puzzle is solved, everyone moves on.

While it's pleasant to chip away at an anagram while others offer advice, the game does not reward cooperation. Medals are awarded based on performance, and there's a clear winner chosen at the end of each episode. Sitting silently for half (or even three-quarters) of the game in order to avoid helping the competition is just not a good time. In light of this issue, my partner and I agreed ahead of time to just flat-out ignore the "competition" aspect and act as a team, winner be damned. This makeshift solution worked for us and increased our level of appreciation, but that we chose to do so points to the underlying contradictions in the game's design.

One final note, although I don't usually call out price when reviewing a game, I felt it was an issue here. Blue Toad Murder Files is available for $7.49 per episode, or $14.99 for Episode bundles 1, 2, 3 or 4, 5, 6. With each segment done in an hour or less and puzzle solutions that never change, the game's a quick jaunt with no replay value. For something that will be a once-and-done experience for most, my feeling is that the asking price is a little high.

Price aside, I honestly enjoyed the Blue Toad Murder Files a lot more than I expected to, but I'm a big fan of quirky characters, clever dialogue and all manner of puzzles. Listening to the cast's silly lines and thoroughly English quips was quite enjoyable, but at the same time, I think I probably have more patience than the average player. Getting wrapped up in the secrets of Little Riddle was a good time for me, but Blue Toad Murder Files strikes me as one of those odd titles that's only going to be appreciated by a very select few. Rating: 4.5 out of 10.

Parents: According to the ESRB, this game contains alcohol reference, cartoon violence. There is no graphic depiction of violence, nor any blood or gore whatsoever. Aside from the fact that this game is basically a murder mystery of sorts, it's quite harmless. There were no instances of questionable language or any sexual situations.

Deaf & Hard of Hearing: You should be aware that there are some puzzles that rely solely on sound in order to be solved. There are no visual cues provided, and no way whatsoever to complete the challenges for those who have auditory impairment. If a player is not able to hear these clues, the only solution is to look up the answers on GameFAQs or to simply "quit" and skip the puzzle. Neither is satisfactory. Besides these puzzles, in-game dialogue is subtitled.