They're Dropping like Flies… so go Solve some Puzzles! 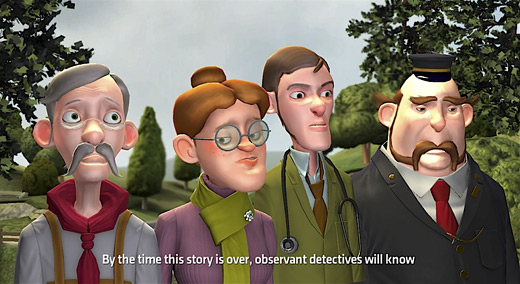 LOW The "cross out letters" puzzle in Episode 2.

WTF The multiplayer makes no sense.

I've never been to England, but it is a place I'd like to visit someday. I'm always up for trying foreign cuisine, and hunting around in the effort to trace a few roots of my family tree might make for a grand adventure. I also look forward to meeting all the great folks I've become friends with on the other side of the pond (thanks to the magic of Twitter.) In the meantime, I'd like to think that the quaint village of Little Riddle in the Blue Toad Murder Files is a pretty good substitute until I decide to buy plane tickets.

Available as a PSN download, Blue Toad Murder Files is an episodic puzzle game that places players in the role of a detective on holiday. After disembarking from a train cutting through the idyllic countryside, rustic peace is broken almost immediately thanks to a series of crimes. In Episode 1, the mayor of Little Riddle is murdered. In Episode 2, a well-to-do lady's estate is burgled, and in Episode 3, City Hall is burned to the ground. There are hints of a larger, underlying mystery involving three valuable statues, but players will have to wait for the release of Episodes 4, 5 and 6 (currently unavailable) to complete the tale.

After playing through all three episodes, I feel fairly divided about Blue Toad Murder Files… I loved the presentation, but the gameplay itself raises concerns.

Starting with the good, each character in the village is just that—a character. Somewhat akin to watching an excerpt from some absurd comedy on the BBC, the developers have crafted fairly lengthy cut-scenes between puzzles, and the writing is often quite good. Full of funny quips, odd accents, and plenty of personality, I grew fond of the cast of characters almost immediately, and their appeal only grows as the game progresses. It's hard not to like a vicar with a relationship to the dark Elder Gods, a butcher on a crusade against "scum," or a hotelier immune to threats because his wife's making him live a waking nightmare. They're all great folk, and Blue Toad Murder Files does not lack charm. However, although I see these cut-scenes and the characters as a strength, I could easily imagine many players having their patience tested by the relative infrequency of the "game" itself. 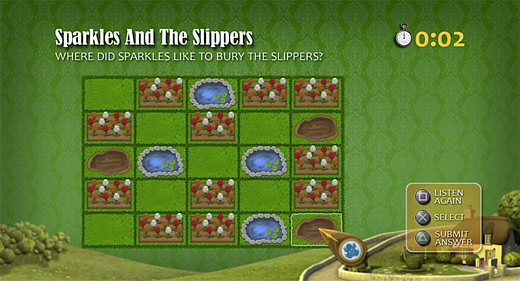 Each episode offers twelve challenges, three memory checks, and one opportunity to choose a party guilty. Some of the puzzles are pleasantly challenging, but any way you slice it, sixteen chances to actually play the game isn't a lot. More than anything else, playing a session of Files feels like being interrupted while watching TV.

Compounding the situation is Blue Toad Murder Files's approach to multiplayer. Clearly positioned to be a multi experience, when extra players are added it actually reduces the amount of gameplay per person—rather than having all players involved in each puzzle, the puzzles are divvied up between them. For example, when player one is trying to count colored ducks spinning in a circle, player two (as well as three and four, if they're present) can do nothing but observe. Once the puzzle is solved, everyone moves on.

While it's certainly pleasant to chip away at an anagram while others shout out suggestions or offer advice, the game does not reward cooperation. Medals are awarded based on performance, and there's a clear winner chosen at the end of each episode. Sitting silently for half (or even three-quarters) of the game in order to avoid helping the competition is not a good time. In light of this problem, my partner and I agreed ahead of time to just flat-out ignore the "competition" aspect and act as a team, winner be damned. This makeshift solution worked for us and increased our level of appreciation, but that we chose to do so points to the underlying contradictions in the game's design.

One final note, although I don't usually call out price or value when reviewing a game, I felt as though it was an issue in this instance. Blue Toad Murder Files is available for $7.49 per episode, or $14.99 for all three. With each episode done in an hour or less and puzzles and solutions that never change, the game's a quick jaunt with no replay value. For something that will be a once-through experience for most, my feeling is that the asking price is a little too high for what's delivered.

To be honest, I enjoyed the first three Episodes of Blue Toad Murder Files a lot more than I expected to, but I'm a big fan of quirky characters, clever dialogue and all manner of puzzles. Listening to the cast's silly lines and thoroughly English quips between mindbenders was enjoyable, but at the same time, I think I probably have more patience than the average player (and my review copy was free.) Getting wrapped up in the secrets of Little Riddle was a good time, but Blue Toad Murder Files strikes me as one of those odd titles that's only going to be appreciated by a very select few. Rating: 4.5 out of 10.

Parents: According to the ESRB, this game has been rated E 10+. Although two characters get shot and one gets struck by a car, there is no graphic depiction of the violence, nor any blood or gore whatsoever. Aside from the fact that this game is basically a murder mystery of sorts, it's quite harmless. There were no instances of questionable language or any sexual situations.

Deaf & Hard of Hearing: You should be aware that there are at least two or three separate puzzles that rely solely on sound in order to be solved. There are no visual cues provided, and no way whatsoever to complete the challenges for those who have auditory impairment. If a player is not able to hear these clues, the only solution is to look up the answers on GameFAQs or to simply "quit" and skip the puzzle. Neither is satisfactory. Besides these puzzles, in-game dialogue is subtitled.