I'm just wrapping up my review for PSN's Blue Toad Murder Files, and while I had a pretty good time with it, I could easily imagine the majority of people hating it. It's fair to say that the game is more cutscene than gameplay, and from a critical angle, there's really not much to praise—BUT—I'll be damned if I didn't enjoy going through the first three episodes with my wife. We are fans of quirk, I suppose.

That said, it's actually a pretty expensive offering compared to most of the other titles on Sony's online service, and for a game that offers so little gameplay, the high price is going to be a major sticking point for most. Myself included, really… if the developers not at least five dollars off of the price, I'd have a much easier time recommending it.

Look for the review to go live in a couple of days. 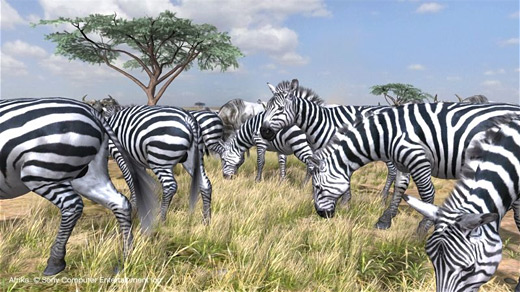 In other games news, I started up Afrika on PS3 just for fun, no review intended.

For those who may not remember (or for those who missed it the first time… the game had ZERO presence) the player takes on the role of a photographer in a relatively unexplored region of Africa. After setting up base camp, requests come in via PC for things like "head-on shot of a zebra" or "monkey in a tree" and so on. At that point, it's up to the player to drive out into the savanna and get the required shots.

It's almost exactly like a terrestrial version of the Wii's Endless Ocean in that much of the game is simply the experience of being there. Replace whales and angelfish with giraffe and gazelle, and it's basically the same thing. I don't mean that as a negative, though. I had a great time with Endless Ocean, and Afrika had little problem keeping my attention as well. There's no combat and animal attacks only result in the player being sent back to base camp, so everything is very safe and harmless. This will definitely be one I'll share with my older son when he comes to visit for summer.

One last note, I'm expecting more codes for Lost Planet 2 (360/PS3) to give away, and in addition, I'm also going to be running a contest to give out multiple copies of Risen on 360. Keep your eyes peeled here for more information soon, and if you're not already following me on Twitter, I would humbly suggest that you do so… I'll be giving out more information via tweet, and you don't want to miss out, do you?

For those of you who might be interested, Eurogamer’s Ellie Gibson wrote an informative as well as entertaining review of Afrika a while back.