My good friend @ChrisGreen87 has just had an interesting opinion piece go up over at GamerDork. In it, he examines the possible implications of Lara Croft's reboot, which seems to put her vulnerability and physical damage at the forefront of the game's imagery. See what he has to say… if nothing else, it will get you thinking.

This week was a tough one for actually playing games. Between work, obligations, and other real-life things that needed to be taken care of, I was only able to squeeze in a fraction of the time that I would have liked to. Still, I did do a bit.

Primarily, I'm still pushing my way through Lost Odyssey (360.) As of tonight, I just made it to Disc 3, although I really should be getting through it a lot quicker.

Anyway, it's still a great experience, although Disc 2 seemed to lapse into standard JRPGness. I didn't find many of the same outstanding story moments that I did earlier, with the exception of a few of the text shorts. With half the game under my belt, I'm hoping that some of the initial high points that hooked me will be matched by the time credits roll. 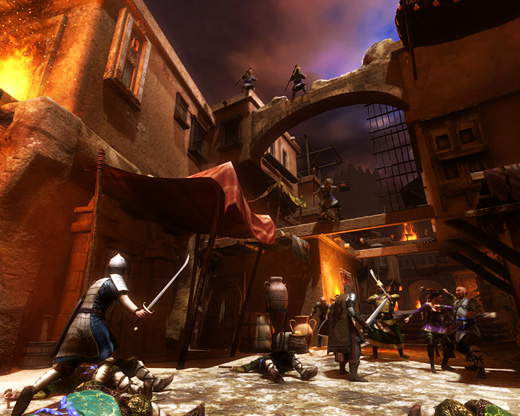 For review, I'm currently making my way through The First Templar (360.) It's a budget release adventure game telling the thirteenth century tale of a Templar Knight and his female rogue partner. It's not the kind of game that will set the world on fire, but for people (like me) who don't mind playing games that aren't on the cutting edge of technology, there's a lot here to like.

The game certainly has its rough points to be sure, but it's one of those rare efforts where you can almost feel the level of effort and goodwill put in by the developers. Basically, this game has a lot of heart, and it shows. In my book, that counts for a lot. I'm not very far into this one, but at the moment it's a thumbs up, for sure. More to come.

I am a huge Hitman fan, and I am thrilled to no end that Io Interactive has FINALLY announced the next installment of the series. (Yes, I think we've all had quite enough of Kane & Lynch and Mini Ninjas, thanks.) Titled Hitman: Absolution, practically no information at all has been released other than a confirmation of the game's existence.

…However, that hasn't stopped one YouTube poster from picking apart the teaser trailer with a fine-toothed comb. I can't tell if this piece is stupidity or pure genius, but I certainly laughed.

As you might guess, it's an homage to Green Lantern, so the timing on their part is quite good. I've seen them live a couple of times and I really dig their stuff in a big way… give them a listen.