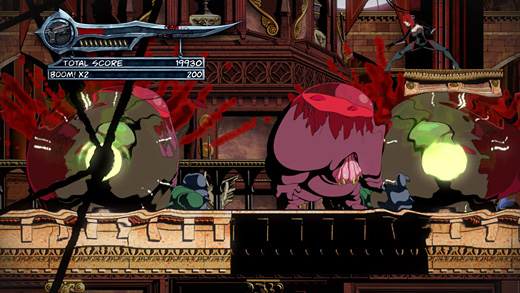 HIGH Rayne's animation is easy on the eyes.

It's been a while since I sat down with a game as bad as BloodRayne: Betrayal

for review. Recent months have treated players to a whole host of titles that were at least ‘pretty good' if not better, so coming to grips with WayForward's latest came as a bit of a shock to my system, and doubly so since I've enjoyed most of their previous works. Some people assert game ratings are generally high since bad games don't often make it to retail, but this one proves that concept patently false.

Starting off on a positive, what's good about BloodRayne: Betrayal? The animation of the main character is nice, and the game (in general) sports a clean, attractive look apart from being a bit empty. Beyond that? I don't have much to say.

In the interest of transparency, it should be noted that I did not finish this game and only put about three hours of playtime in. Take that as you will, but as someone who has finished hundreds and hundreds (and hundreds) of games, I think it says something that I was eager to get away from this one as quickly as possible.

Positioned as a 2D action-platformer trying hard to evoke shades of Castlevania, the player takes control of half-human, half-vampire Rayne and her slicing, dicing wristblades. Rayne has a decent set of moves without being anything to write home about, and the game could probably skate by on her smooth animation alone if not for the fact that it's an absolutely horrible experience once the controller is in hand.

People with a low tolerance for frustration will want to far stay away since BloodRayne: Betrayal is chock-full of cheap hits that come out of nowhere, and an apparent total disregard for difficulty balancing. It's common to get swarmed by enemies or pestered by flying foes, and once the player starts getting knocked around, it's much easier to succumb than it is to make a comeback.

Compounding the difficulty is the sluggish nature of the controls. In games that require fast action and quick reflexes, step one is establishing a tight and intuitive interface. Even the smallest bit of lag under pressure becomes noticeable, and can present a significant barrier to satisfying play. BloodRayne: Betrayal has floaty, unresponsive handling that's constantly on the periphery of almost getting the job done, but never does.

With steep difficulty and poor controls, the rest of the game is just a slap in the face. Level designs are too simple and inconsistent—why can some walls be jumped from while others can't? There are tons of deadly, health-sapping UV lights scattered all over, but they're practically invisible. Enemy variety is pathetically small, and each area is stuffed comically full of identical character models. Save points are sometimes too far apart. Precision platforming is a joke thanks to the controls, and the list goes on… BloodRayne: Betrayal would never have been a special game to begin with, and the wealth of problems it has just destroys any remaining hope of recommendation.

With shoddy production values and multiple lapses in judgment with regard to the game's overall design, BloodRayne: Betrayal

feels like an amateurish, half-baked XBLI title that should be begging for a buck instead of the ready-for-prime-time XBLA title it's pretending to be. No thanks. Rating: 3.0 out of 10.


Disclosures: This game was obtained via publisher and reviewed on the Xbox 360. Approximately 3.5 hours of play were devoted to the single-player mode, and the game was not completed. There are no multiplayer modes.

Parents: According to the ESRB, this game contains violence, blood and gore, suggestive themes, and mild language. Although the art style is somewhat cartoon-like, there's a ton of blood, killing, and general grossness. It's not the most graphic thing I've ever seen, but there's no question that I wouldn't let my own children play this (or even watch it.) My advice would be to steer children clear—older players only.

Deaf & Hard of Hearing: You shouldn't have any problems. Dialogue is delivered through text and I never noticed any point in the game that relied upon audio cues.