Packing Heat from the Last Generation 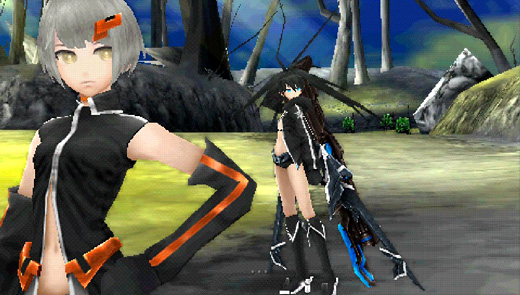 HIGH Mastering combat and getting through bosses untouched.

LOW The forest area kills the pace and drags on for way too long.

WTF What the heck is neblading?!?

It's amazing that after so many years of struggling in the United States and then being replaced by the (also struggling) PlayStation Vita that people are still creating new software for Sony's last-gen PlayStation Portable, but they are… and some of it is pretty great.

Although I had no previous knowledge of the property, Black Rock Shooter apparently originated with a simple drawing, which then inspired a song, which then in turn inspired an anime and various supporting materials, which ultimately led to this game. It's a bizarre chain of creation, but considering how wonderfully it all turned out, I won't question it.

The story begins after aliens have been ravaging the planet for years, reducing the entire population down to a dozen war-weary soldiers. As humanity's final response, they unleash a super-powered clone girl called BRS. Possessing super speed, enhanced reflexes, and a special morphing weapon, she's an unstoppable force. On the other hand, she also suffers from a lack of identity and has difficulty coming to grips with her unique situation.

Although the story moves quickly and the game is on the shorter side, I appreciated the small touches taken to tell the story of BRS. It won't win awards and unfortunately falls into some tired tropes after keeping things fresh for the most part, but giving credit where credit is due, it gets the job done better than most. However, it's the gameplay that makes Black Rock Shooter hum.

Each of the game's five levels are broken up into a series of short missions. Players are free to explore each small map from a third-person perspective, and when BRS touches an enemy on-screen, the game transitions to the combat mode.

Although I confess that the controls felt absolutely mental at first, I found Black Rock Shooter offered a novel, hybrid blend of real-time action and traditional Japanese role-playing game (JRPG) elements once I got comfortable. The combat is roughly comparable to some "Active Time Battle" systems found in other games, but much more dynamic and reflex-dependent.

When an encounter begins, BRS stays on a single plane in the foreground while enemies populate the background. Since BRS is locked into the front of the play field, it's crucially important to block and take reduced damage, or master a quick-dodge that jets her to opposite sides of the screen to avoid incoming attacks. It's a tight, stripped-down system, but it's marvelous. 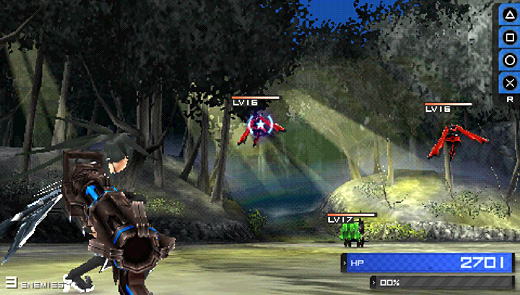 By removing the need to navigate through three dimensions, Black Rock Shooter encourages prioritization of elements onscreen and transforms into a rhythmic type of aim-shoot-dodge-shoot that's beautifully elegant. Spicing things up, BRS can equip up to four special abilities in addition to her blaster. There's a gatling gun, an enemy-sweeping hammer, a stun rifle/kill-blade combo, homing shots, and more. There are also stat-buff options or health regeneration. Any combo is possible, and since they're ammo-free and tied to a cooldown system, the lack of excessive inventory items to manage keeps things moving.

After designing such a refreshing combat system, it would've been easy for the devs to cobble together some standard filler for players to blast through and call it a day, but they went the extra mile and filled Black Rock Shooter with a surprising amount of variety. Minor dialog choices pop up when talking to characters, a quick motorcycle section offers a break from standard combat, the script is peppy without being verbose, and there are noticeable changes of pace sprinkled throughout.

Similarly, the environmental design receives an equal amount of attention. Mood and tone in the world is quite good, although production values are commensurate with what one would expect from a mid-level title on the PSP. Even so, the stylized, post-apocalyptic atmosphere is easily communicated through ruined cities and lonely snowfields, and no clutter drags the proceedings down… until the fourth level.

Upon reaching this area (the forest) the game grinds down into a boring slog through an area that is both visually uninteresting and confusing to navigate. Because of these factors, this section feels three times longer than any other area, and not in a good way. Considering how smooth and measured the rest is, the lack of energy here was puzzling, and the game would be better off without it. That said, this forest is Black Rock Shooter's only mis-step, and an easy one to forgive.

Once past that overlong section and after the credits roll, there's still plenty left to go for those who want it. Certain goals and challenges only unlock after beating the game the first time, and there is apparently a second, better ending for those who go the entire distance. I'm the kind of person who rarely goes for bonus unlockables or total completion, but Black Rock Shooter is one of the very few titles that motivated me enough to replay after putting the final boss down. Although I haven't done everything yet, I'll happily keep it on my Vita and chip away at it as time allows.

As a critic, there are few things that I enjoy more than coming to a title with absolutely no information and then finding it to be a joy to play, and that was exactly the case with Black Rock Shooter: The Game. It may be designed for last-generation hardware, but it makes an excellent case for small-scale design and proves that great experiences can be had without any need for cutting-edge technology or million-dollar budgets. If the Vita found itself hosting more titles like this one, it might find itself struggling just a little bit less. Rating: 8.5 out of 10.


Disclosures: This game was obtained via publisher and reviewed on the Vita. (Reviewer's Note: The game is designed for the PSP, but it is compatible with the Vita.) Approximately 12 hours of play were devoted to the single-player mode, and the game was completed. There are no multiplayer modes.

Parents: According to the ESRB, this game contains suggestive themes, mild language, and violence. Although there's nothing especially graphic or risqué about this game, it's most appropriate for teenage players, or older. There's a touch of salty language, and the game is about shooting lots of stuff—mostly robots, but there is some clone-on-clone violence when facing bosses. The main character herself looks quite young and most of her outfits are definitely on the skimpy side, as well.

Deaf & Hard of Hearing: There shouldn't be any problems here. I played more than half of the game with the sound off, and had no difficulty whatsoever. There were no important sound cues during play, everything necessary for success is on-screen, and all dialogue is subtitled (voiceovers are in Japanese.). It's totally accessible.