I haven't completed my own testimonial for Monster Hunter yet and I've got a few other things that need attending to first, so in the meantime, let's get back to the normal format… I'm sure @Nightdreamer will be happy, at least.

So, my Soul Sacrifice (Vita) review went up, and it's been… well, let's just say, less than popular with the fans. Frankly, I thought it was mind-numbingly boring despite some great concepts, but I appear to be in the minority on this one. Your mileage may vary. 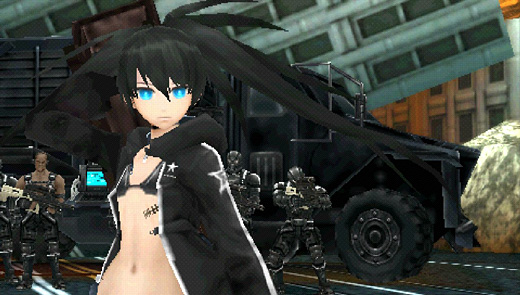 Moving on, I've heard absolutely no one talking about Black Rock Shooter: The Game, but it was just released by NIS America and it's currently available on the PSN store for $20. (designed for PSP, but compatible with Vita.) I just completed it yesterday, and I have to say, I had an absolute blast with it. It's a very small, focused game that feels perfect for playing on the go, and there are a lot of very smart design decisions on display.

Putting the anime story aside for the moment (which actually wasn't all that bad) the big hook that sold me was the combat system—the main character is anchored to the foreground while enemies populate the background. Before they attack, they flash, giving the player a chance to either block or dodge to the other side of the screen. In return, the player can use a standard weapon or one of many specials that can be assigned based on preference.

It's a little tough to describe, but once you get the hang of how the game operates during combat, it feels just wonderful to play… I found myself often in a groove and my fingers would pleasantly autopilot during each fight in a semi-flow state. I love, love, love this combat system.

The rest of the game is quite nice. The art direction is good, the streamlined nature of the core structure was smart, and there's a good amount of replay since missions are quite short and there are different layers of objectives to complete for those who want to get their money's worth.

My full review is coming soon, but this tiny little project is definitely one of my favorite games of the year so far. Big thumbs up.

In other games news… well, I guess I don't have much to report. It's been a busy week, and apart from catching a few quests in Monster Hunter while I'm out and about, I haven't had a lot of time to play anything. Hopefully that's going to change next week… I'll be looking into Far Cry 3: Blood Dragon, doing some quick hits on a couple of iOS titles, and I'm hoping to spend some time with Metro: Last Light as well.

Heads up—haven't played Papo & Yo because you don't have a PlayStation 3? No problem, it just hit Steam a little while ago. Here's my review of this noteworthy, autobiographical experiment, and if you Steam stuff, then you should go play it yourself, posthaste.

For all the beautiful, intelligent Sherlock Holmes (by Frogwares) fans, check this video… If you've played the older titles, you will be STUNNED by the upgrade. Crimes & Punishments is looking goooood.

Oh, one last thing on the topic of games: I just got wind of Techland's new title, Hellraid.

If they were putting their "A" team on this and their "B" team (or, uh, some interns) on Dead Island: Riptide, that would explain why it came out so poorly… Riptide aside, Hellraid is looking promising. I've got no info apart from what's in this trailer, but I'm verrrry intrigued…

The Independent Games Festival is coming to Seattle on June 8 from 10 AM to 5 PM, and it's a totally free event. There will be a number of big-name speakers giving talks, and lots of indie stuff to check out. If you're interested, you can register (again, for free) at this website.

I haven't talked about comics for while, probably because I haven't read any for a while… I had a semi-unfortunate situation happen at my local shop so I stopped buying for a bit, and I have to be totally honest—after skipping my regular reads for a month or two, I found that I really didn't miss them all that much.

I think part of it is that there's just a lot of mediocre comics out there, and another part is that comics these days (mediocre or otherwise) are pretty damned expensive.

I can remember going to the comic shop when I was a kid and picking up some books for fifty or seventy-five cents each. The average book I was reading these days is a lot closer to three or four dollars apiece, and when it only takes me five minutes (or less) to go through a single issue, that's not a very good ratio of dollars-to-entertainment.

Long story short, it's too much money for not enough bang. I'll still pick up some collections and read in bulk when there's a good story to be had, but I think I'm done with the monthlies for now.