Nothing Inside the Armor 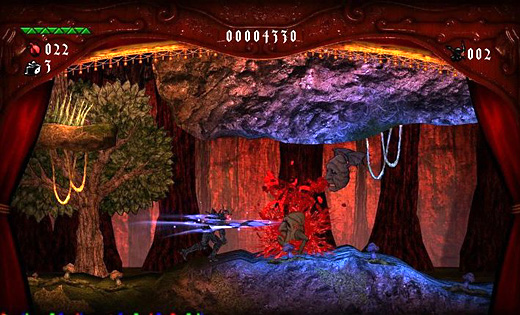 HIGH The first four levels have style for miles.

LOW The final level is boring, and the last boss is infuriating.

Although I'm a believer that every great video game needs a strong sense of artistry and clear directorial intent, that doesn't mean mechanics and gameplay are secondary. To the contrary, they're every bit as important as characters, themes, and visuals. Black Knight Sword

is exactly the sort of game that proves this point. With too much focus on the former and not enough on the latter, it's yet another flashy, unsatisfying project from eccentric game designer Suda 51.

Functionally, Black Knight Sword is a 2D platformer that puts the player in the role of the titular Knight. There's plenty of running and jumping, and the sword mentioned in the title isn't for show. Over the course of five levels, the player will be using it to poke all sorts of strange-looking enemies as they die spurting showers of blood. From this perspective, it's a very simple, straightforward affair. However, it's obvious that the point of this project wasn't the gameplay, but to instead create an arresting visual style, and to that end, Black Knight Sword is a wild success.

The first thing anyone will notice is that entire game is designed to look as though the action is taking place on a puppet stage, complete with curtains framing the screen on three sides and the silhouettes of an audience down below. Small touches like scattered applause or the murmuring of people in seats continue the façade.

This premise is in itself unique, but Black Knight Sword doesn't stop there. Nearly every moment of play time is crammed full of strange sights and bizarre sequences—things like having the backgrounds constantly change as though there were stagehands replacing sets on stage in real-time, falling into an unexpected bullet-hell shooter sequence while riding on the back of a giant chicken, or dodging ICBMs at the Mexican border.

From a visual perspective, I can think of few projects as unpredictable or as interesting as this one. The audio is just as bizarre, with strange tempo changes and a sort of mentally-ill discordance to the music which frequently made me feel unsettled and off-balance. If that was the goal (and I'm sure it was) then the audio designers should be patting themselves on the back. 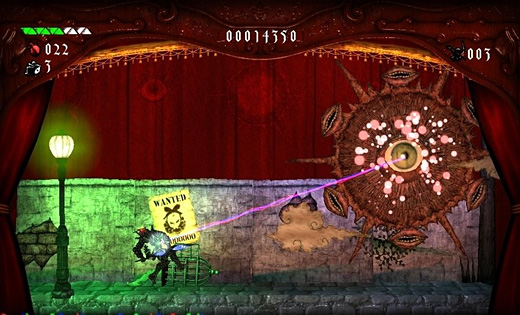 Aesthetically, Black Knight Sword will be of great interest to players who place prime importance on such. It's bold, it's different, and it has a sensibility all its own. Players who've experienced Suda 51's other titles are sure to see familiar themes (Black Knight Sword is very similar to a section in Suda 51's recent Shadows of the Damned) and for people who enjoy his work, it's well worth investigating.

Sadly, the rest of the experience isn't nearly as impressive. The core design of jumping and killing enemies is as old as the medium itself, the levels are quite humdrum when examined apart from their fantastic style, and there's rarely any sort of interesting task or variation in formula apart from the chicken segment mentioned earlier.

Furthermore, the Knight gains a new attack after each level, but none are as effective or worthwhile as using the basic stabs. He's also got a magic helper who can be summoned to cast spells or be launched like a projectile, but its main function is to flip switches. The potential for deeper, more nuanced play is here, yet it never materializes at any point. It's as if these things were brainstormed in a developer session because unlocking new abilities and having magic is Something Games Do, yet none of it ever feels necessary or advantageous.

If the only problems in Black Knight Sword were slightly pointless upgrades and shallow gameplay, I might have given it a higher score due to the strength of its style alone. However, the game ceases to be interesting in the fifth (and final) level with some extremely uninspired visuals, recycled content, and an infuriating last boss which is an order of magnitude more difficult than anything else in the adventure. The game is already quite short as it is, so to see a full fifth of it phoned in was disappointing.

, it's impossible to ignore that there's barely anything of substance underneath its appealing veneer. Gamers looking for an art-house experience would do well to spend a couple of hours soaking in what Suda 51 has served up. Those more concerned with gameplay they can chew on might want to think twice. Rating: 6.0 out of 10.


Disclosures: This game was obtained via publisher and reviewed on the PS3. Approximately four hours of play were devoted to the single-player mode, and the game was completed. There are no multiplayer modes.

Parents: According to the ESRB, this game contains blood and gore, and intense violence. The game is definitely on the creepy side and the misshapen enemies die with enormous gouts of blood splashing everywhere. The entire thing looks a bit like a twisted puppet show, but I'd still probably steer young ones clear.

Deaf & Hard of Hearing: You won't have any problems. There isn't much of a story, and what little dialogue there is comes accompanied with text. There are no significant audio cues needed during gameplay. It's fully accessible.

Bingo. This seems as if it was made after a light bulb flashed when Suda was creating those awful sections of Shadows of the Damned. Not a good premise for a full game.

A game that is 5 levels long is pretty absurd. Are these levels split up into smaller areas? Guess I’ll just play around with the demo one of these days.