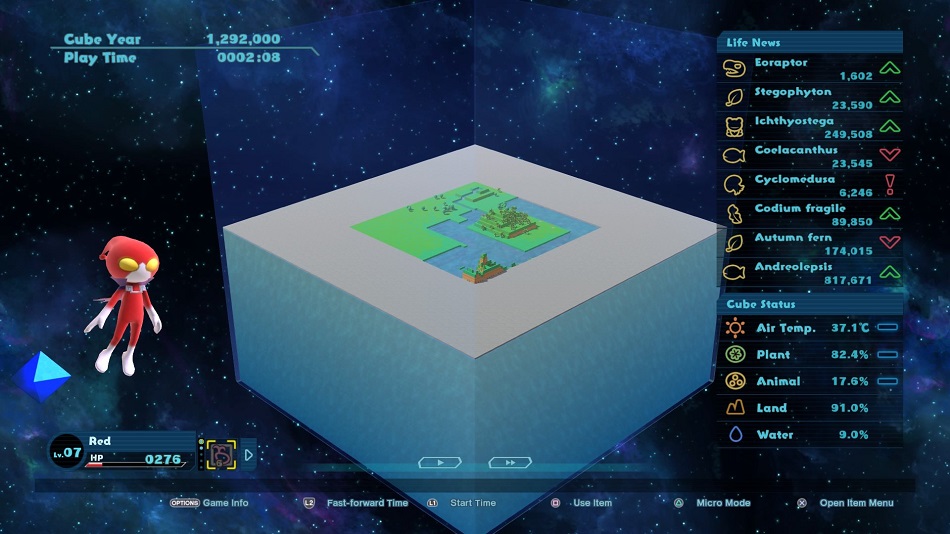 WTF I know there’s a new species here somewhere… BUT WHERE?!?

As a homeschooling parent, I’m always looking for opportunities to squeeze facts into my kid, and incorporating information into games is an awesome way of teaching young ones in a way that easily connects with them. If I can find something that’s great to play and enriching on some level, I’m there. When I first heard about Birthdays: The Beginning, it seemed like just the ticket. However, while the concept is great and I did end up having good discussions that were inspired by it, in the end, the game was sorely lacking in key subjects.

Birthdays puts the player in charge of a small cube of land floating in space. There’s a bit of superfluous story to rationalize it, but the point of the game is to create basic forms of life and then increase them in complexity by changing environmental factors and evolving things until humans emerge.

Think of Birthdays as a terrarium, and the player can add and subtract things to alter conditions within. While there are a number of variables, the only one that seems to have significant impact is the temperature. Adding more water to the cube makes the entire habitat warmer, and taking water away and making it more terrestrial turns it colder.

It’s exciting when life first emerges. Starting with plankton in the ocean, it isn’t long before slightly more complex organisms emerge, and at this stage the simplicity of the simulation is just fine. However, after a while it was hard to deny that cranking the thermostat up and down just wasn’t enough to keep my interest. Worse, there are often times when the requirements to make a specific animal appear are mystifying – the world frequently seemed just right, but nothing would happen. 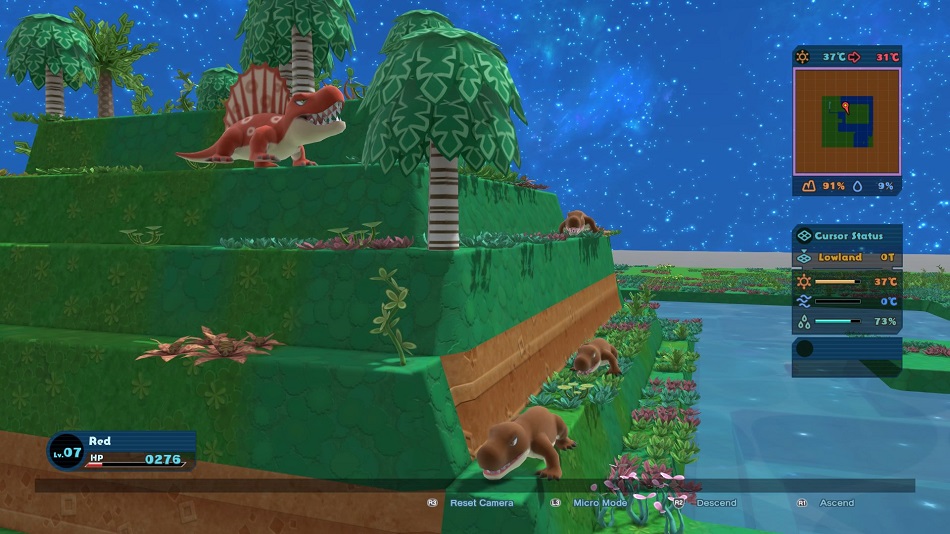 For example, at one point early in the game I was waiting and waiting and waiting for a Coelacanth to be born. According to the info in the menus I had everything in order, but the thing just wouldn’t materialize. I ended up just staring at the same old schools of regular fish for far too long until I randomly used an item out of frustration. Boom, coelacanth! It would’ve been nice to know that the item was required, or perhaps I just needed to wait even longer? It’s hard to tell.

When the cube finally has a variety of creatures populating the land and sea, it’s neat to watch them walking, swimming and flying. Sadly, watching is all that’s possible. As one might guess from this, Birthdays is a fairly passive experience, and over time I started to crave a little more interactivity. Each animal has a canned animation that plays out over and over, but they don’t interact with each other or the environment, and there’s no way for the player to do anything with them — this feels like a huge missed opportunity to me.

Given the material, there are tons of scenarios that could impart information about how species thrive or go extinct, how food chains work, or how survival becomes more difficult when conditions change. Instead, it’s all about nudging a thermometer and watching things walk around while time passes. I would’ve loved a more active role at some points — maybe controlling one of the dinosaurs on a hunt, perhaps pollinating with early insects, or having some other sort of active task to perform. Simply watching a screen without doing much of anything is not a great channel for information or gameplay.

In addition to being so dry, Birthdays also has a few technical issues. When in the first-person camera mode, pushing forward moves the camera that way. This makes it hard to scan areas because the view frequently nosedives straight towards the ground. It would be far more effective to keep the camera at a steady height and simply hover it over the land while looking for smaller animals.

Also, the player has to manually click on a new species when it appears in order to gain EXP from it. While this is easy enough when there are a small number of critters in a barren landscape, it becomes remarkably difficult to do once the population rises. I frequently failed to find what I was looking for, and couldn’t see a reason the EXP wasn’t automatically awarded. The game could also easily provide a quick pop-up window showing the new animal instead of making the player hunt for it.

While I absolutely love the concept of Birthdays: The Beginning, the execution leaves much to be desired. It’s too passive and too finicky, and doesn’t do enough with the core concept of life appearing and evolving over time. There’s not much here for seasoned players or curious kids, and as someone who’s been playing games for a while, I can say that this formula was done far, far better on the SNES back in 1993 with EVO: Search For Eden. Look it up! Rating: 4.5 out of 10

Disclosures: This game is developed by Arc System Works and published by NIS America. It is currently available on PS4 and PC. This copy of the game was obtained via Publisher and reviewed on the PS4. Approximately 10 hours of play were devoted to the single-player mode, and the game was not completed. There are no multiplayer modes.

Parents: According to the ESRB, this game is rated E. This is a simulation game in which players guide a creature as it forms an ecosystem. Players can shape geography, alter climate, and foster various life forms (e.g., plants, dinosaurs, mammals, sea creatures). It’s totally safe for anyone except perhaps people who refuse to believe in evolution as a scientific concept.

Deaf & Hard of Hearing Gamers: There are subtitles for all dialogue and instruction, and there are no audio cues necessary for gameplay. It’s fully accessible.

Sounds like Birthdays fell into the Spore trap – sets up the potential for what could be an intriguing look at the evolution of life, yet never does enough with the concept.