(Note:This review does contain some spoilers.)

In his main review, Sparky does a fine job of tackling some of the loftier issues in the cerebral side of BioShock 2, and I don't disagree with his conclusions. However, where I do think we diverge a bit is in our final estimations. For me, the return visit to Rapture was certainly a pleasant enough trip, but far from what it could have been.

While I thought the original BioShock was a fine enough game, it wasn't a religious experience for me the way it was for some. Accordingly, I'd say that my expectations for this sequel were quite reasonable. I knew another "would you kindly" moment would be virtually impossible to pull off, and the entire industry was aware that matching or topping such a successful first effort would be an absurdly stiff challenge. The devs must have felt the same way, because rather than trying to bring something new to the formula, BioShock 2 offers an experience that's nearly identical.

People who played the first game will know exactly what to expect: Collecting Plasmids, hacking security bots, researching Splicers, and listening to those tediously contrived audio logs is all very familiar stuff. Granted, the adventure is set in the same location and same world as its source material so things shouldn't be night-and-day different, but I did think there were some missed opportunities that a true sequel might have explored.

The biggest and most obvious issue I had was that playing as one of the iconic Big Daddies didn't feel any different than playing the "average Joe" from the first game. Taking on one of those armored, hulking brutes in combat was serious business before, so finding that the player doesn't command the same level of imposing physical prowess was disappointing. Despite being significantly different in terms of concept, the two protagonists are clones of function. I understand that being able to bulldoze through the entire game as an unstoppable powerhouse would not have been the optimal answer, but there just wasn't enough done with the premise. 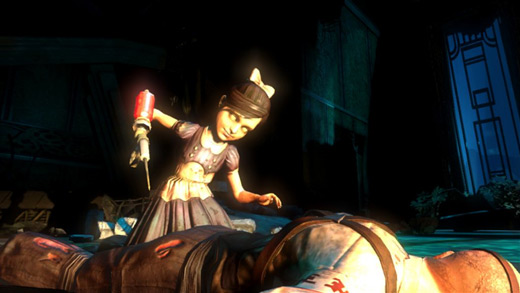 Looking at another area that could have been expanded, near the end of the game players briefly control a Little Sister. I found this part fascinating since the Adam-collecting children see Rapture in a totally different way. Rather than the decrepit, rotting ruin that it is, everything viewed through their eyes is glowing and beautiful. The contrast is stunning. Also intriguing was that the Little Sister is defenseless against predators. Unfortunately, the sequence is over before it really starts and doesn't serve a significant purpose. Quite disappointed, I couldn't help but wonder how the game might have been richer if the player had been tasked with actively hunting down Adam-rich corpses while an AI-controlled Daddy kept watch? What kind of tension might have been generated if an unprotected player in a Sister's shoes had to escape roving packs of Splicers? I suppose we'll never know.

Those were just two brief examples of missed opportunities, and there certainly were others. Despite new characters and attempts at "continuing the story" of Rapture, the bottom line (as cliché as it is to say) is that BioShock 2 is simply more of the same. Those who enjoyed the first adventure and craved more will definitely get it. Those not previously satisfied won't change their minds due to anything on this disc.

While there weren't many (or any) risks taken, it should be said that the technical quality of BioShock 2 is just as solid and carefully-produced as it was before. It's a fine project with generous production values and a goodly level of polish. Setting enemies on fire with pyrokinesis and following up with a few shots from a grenade launcher is violently enjoyable, defending a Little Sister from Splicer onslaughts was certainly exciting, and the level design is generally more linear, in a good way. Progress through the game is fast and rarely slowed by sticking points, which was something that I appreciated.

After watching credits roll, I can't say that playing through BioShock 2 was a regrettable or negative experience; it plays well, it's pretty to look at, and the mechanics are as pleasant as they were the first time around. That said, it never significantly diverges from the original, and brings nothing substantially new to the table. If the game was half as long as it is, I'd call it the world's best DLC and recommend it to anyone. However, the fact is that it's not DLC—it's positioned as a full-fledged, numbered sequel. Viewed from this perspective, the title comes up short, and perhaps even irrelevant. This return trip to Rapture amounts to barely more than a quick jaunt down memory lane. Rating: 6.5 out of 10.

Disclosures: This game was obtained via retail store and reviewed on the Xbox 360. Approximately 8 hours of play were devoted to the single-player mode, and the game was completed. No time was spent in multiplayer modes.

Parents: According to the ESRB, this game contains blood, intense violence, sexual themes, and strong language. Drinking alcohol benefits the player's reserve of health and special powers, although drinking to excess causes a blurred screen effect. Part of one level is a red light district and involves an extended tour of a brothel. Some dialogue has a sexual subtext that may disturb players. Also, there are little girls drinking blood out of a syringe, which never stops being creepy.

Deaf & Hard of Hearing: All major dialogue is subtitled, but audio cues that have no on-screen counterpart provide important information about the approach of certain enemies (spiders, houdinis) and security apparatus. In addition, enemies respawn frequently in cleared areas; the only warning of this is hearing their dialogue in the distance (no subtitles). Hard of hearing players may therefore find the game more difficult. Also, Negative Gamer's Wardrox has reported that color-blind players may have difficulty with the hacking minigame.

I enjoyed Bioshock 2, but considering that I haven’t replayed (I replayed the first game 4-5 times), or even glanced at it after completion, is telling.

I can’t wait for you guys to review Mafia II. I’ve been hearing mixed reactions about the game. People keep telling me it’s nothing but fetch quests and boring driving segments.

I find this review more favourable than the original one posted (I understand why the guy liked the game, but as a review BioShock’s failures need to be highlighted properly, not overlooked). My main issues with these games is the dire combat; the guns don’t feel like they’ve got any weight behind them, and fighting anything other than a Big Daddy on hard difficulty soon induces boredom (especially with respawns in the first game *yawn*). It’s hard to play a game like BioShock after experiencing Half-Life 2, or even Halo for that matter. The gameplay just doesn’t stand-up to today’s… Read more »

The biggest and most obvious issue I had was that playing as one of the iconic Big Daddies didn’t feel any different than playing the “average Joe” from the first game.

bullseye! that’s the first thing i noticed too. man, what a waste of a game.