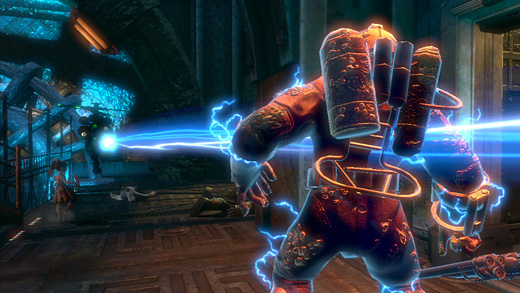 In an interesting turn of events, I think the final scenes of this DLC are probably some of the best to be found in the series, and it got me thinking… if there was one thing missing from both of the BioShock games, it was that there was not enough of the human element.

When constantly on guard, running from hallway to hallway on the alert for attackers, it's hard to really focus on the more cerebral side of Rapture. I've always felt that although it was a visually rich environment, the entire world got short shrift thanks to too much combat and an over-reliance on painfully artificial storytelling mechanics. There are entirely too many "microblogger" audio samples to be found in every corner of the underwater complex, and it's quite rare when a player encounters (much less interacts) with an NPC who isn't a deformed mutant or assault robot. I've spoken to many people who swear by the atmosphere and story of BioShock, but it's never really clicked with me until these final scenes in Minerva's Den.

What made this particular scene so good was that there was no combat, and I had a few moments to reflect on the story and the dramatic elements the developers had created. I didn't have to look over my shoulder for splicers, I wasn't checking every single box in the area for ammo or cash, and I had enough mental space to take a few breaths and chew on what was before me—and you know what? It was really effective. It really worked. I actually started to feel a bit for what happening in the story, and my immediate next thought was…

"Why couldn't they do this with the rest of BioShock?"

(…And although both BioShock 1 and 2 are guilty of this sort of detached, stilted dramatic side, 2K Marin got it more right than Irrational did, if you ask me.)

While I'm glad I've had the chance to play through everything that's been offered so far and I definitely enjoyed time with the iconic Big Daddies and Little Sisters, it was a little bittersweet to finish with Minerva's Den. That brief taste of emotion and those extra few minutes spent on the human side of the game put everything else that came before it in a somewhat shallow, unflattering light, and made me wish that the developers of both games had made slightly different choices and strayed a bit further from their formulas.

More importantly, I hope that the good people working on the upcoming BioShock Infinite will take a few moments to retool the 'Shock identity, and not be content to simply take the gameplay ideas from under the sea and relocate them to the skies above.

Thanks for your insightful comments. I basically agree with everything you said, and I think you said it a lot better than I did. ^_^

I guess that’s what happens when you blog half-asleep, eh?
… And just for the record, if I was to rank them (because that’s what gamers do, right?) It would go like:

The reason I feel the final moments of Minerva’s Den have such an impact is because they are a rare example of a real dénouement in a game. The climax of the game, and the plot, has already occurred but there are still a few threads to resolve and the final fate of those involved to be explained. There is nothing left to do but there is still more to say and though the manner in which it is said is fairly staid (some images on a wall and an audio log) the space and distance these final story beats… Read more »