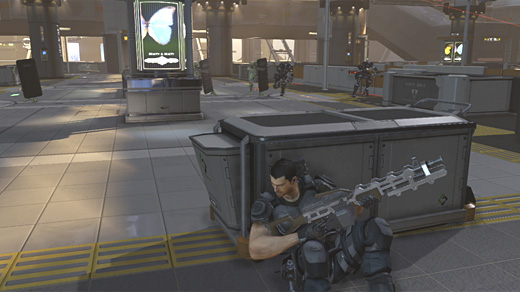 LOW Not realizing I could do a certain action, causing me to miss a key event.

WTF Rachael is a refreshingly atypical female squadmate. Why isn't there more of her?

Every once in a while, a game will catch my eye for no obvious reason. There'll just be something about it, and often it's indefinable… it's like I've borrowed Peter Parker's game-related spider sense and a little tingle will tell me to keep tabs on something despite no real evidence of why I should. That was exactly the case with Binary Domain

From all outward appearances, it was going to be another forgettable third-person shooter, but I couldn't ignore the tingle—and I'm glad I didn't. After completing Sega's squad-based Terminator/Blade Runner mash-up, it turned out to be one of the best action games I've played in quite some time, and will most certainly turn up on my year-end "best" list. I can understand why someone who hasn't tried it might not pay it much attention thanks to a lack of sizzle in the marketing department, but I'm here to say that it's a superb title that deserves to find an adoring audience.

One of the biggest things that stands out for me is that in addition to having top-notch shooting action that's as smooth as melted butter rolling down Teflon, the developers have an almost-perfect lock on the game's pacing. I have to disagree with Eric and his feeling that the game was lacking an "X factor" in this respect. Although there were many times when things could have bogged down into a slow-moving crawl, Binary Domain managed to keep moving at a red-hot clip thanks to lots of unexpected situations, variations in the action, and some great twists. Shooting from moving vehicles, detonating a building (while still on it) and crawling up giant tentacles? It's unforgettable. In fact, I think the sole exception to the sleek pace is the science lab near the end of the game. While that part could have been trimmed, it still wasn't terrible. Everything else? It hums.

However, that's not to say that the game is nothing but nonstop action. Even the best gunplay can get tiresome if it's presented without peripheral content, and this is where Binary Domain really shows its genius.

Although it is without question a third-person shooter, it includes several scenes where the characters are taking a quick breather from combat and having a chat with each other. They're never long and they aren't deep, but these moments show the game's human side and let the writing shine through. It's a great add. Plenty of titles give players endless waves of enemies to mow down, but very seldom do they let the characters holding those guns relate as a person, or display any depth. Binary Domain nails it.

In terms of the Consequence system, I have to slightly break ranks with Eric again. Although it doesn't have a drastic effect during combat that I could see, building trust and affinity with teammates does play out in a significant way, story-wise. I don't want to spoil anything for those who haven't played it, but making strong connections with teammates is well worth the effort and there are different cut-scenes and endings that can be earned based on these factors. Although it's hard to tell what their effects are at first glance because they're so seamlessly integrated into the story, they are most definitely there.

I could go on and on, but Eric made a strong case for Binary Domain

's gameplay in his main review, and I hope that I've explained my appreciation for some of the supporting elements. The two go hand-in-hand to create an action game that provides plenty of thrills, but still manages to tell an interesting sci-fi story populated with characters I wanted to team up with again. By adding just a splash of the kind of story and character that's usually found in other genres, the game as a whole is taken to another level and manages to provide a fresh, engaging "total package" experience. In fact, I'd say that it's proof positive that every genre can be enhanced and improved, and that every kind of game still has room to grow. Rating: 8.5 out of 10.


Disclosures: This game was obtained via rental and reviewed on the PS3. Approximately 8 hours of play were devoted to the single-player mode, and the game was completed. No time was spent in multiplayer modes.

I think what Brad writes in his review is enough to know whether or not you would want to play the game. The actual score is irrelevant.

Yes, this game has that kind of thing that makes me wonder. I finished the game today ans was satisfied by it. I’m attracted to the “smaller” (by marketing means) games like NIER (absolutely terrific game) and Majin and am glad I’ve played this title. The game captures the spirit of futuristic Tokyo and the story is Blade Runner esque adorable. Still, I miss something. It’s to clean or maybe too generic. Yes, the setpieces and cvariations are cool, but still.. it’s difficult to explain. I liked Vanquish better, but this is still recommended. BTW, the first (MINOR SPOILER ALERT)… Read more »

Glowing review Brad, but incomplete. Incomplete, because you gave it an 8.5 and, by inference, neglected to articulate why you feel it falls short of greatness.