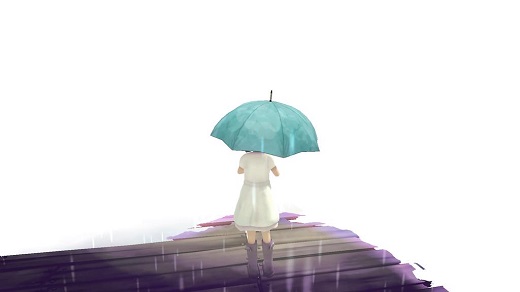 HIGH The art is beautiful.

LOW I get that Rae is blind, but her walking speed is rage-inducing.

WTF There's literally no gameplay to be had here.

When I first saw Beyond Eyes in a sizzle reel shown during E3, I thought it looked amazing. The glimpse of a small indie project with stunning watercolor visuals and a young girl who's lost her sense of sight seemed exactly like the sort of unique thing that I go out of my way to find. Now that I've completed the game, I shouldn't have bothered—it was one of the most frustrating, empty, and pointless titles I've played all year.

The story of Beyond Eyes is bare-bones. Rae is a young girl who loses her sight in a fireworks accident. As she learns to deal with her new disability, she befriends a cat named Nani. The cat disappears one day, so Rae decides to go out into the world to find her. That's as much as the player gets, and it's not a lot to go on.

I had hoped that the tale would grow richer as Rae progressed, but that's not the case. A few sentences of text stating the obvious pop up here and there, but Rae has no internal dialogue, there are no real conversations, and the majority of playtime has Rae utterly silent except to call out the cat's name every so often.

Without any characterization to endear Rae to the player, it falls to her interactions and the world she's in to tell the tale, but Beyond Eyes can't get it done.

Giving credit where it's due, the most notable thing about Beyond Eyes are the visuals that I mentioned. Since Rae is blind, the world is nothing but blank space outside of her range for hearing or smelling, and this void does a good job of attempting to approximate what it must feel like for a blind person in a new place. As she gets near things, colors and objects in the landscape wash in as they enter her field of perception. It's a striking effect.

Unfortunately, the art is the only thing this project has going for it, and as I've said many times before, visuals alone can't carry a game. There has to be a mental hook. There has to be some sort of meat on the bone. In Beyond Eyes, each chapter of the game is Rae plodding forward as the scenery pops into view. She inevitably hits a dead end or an obstacle, and then she has to keep walking around to find a path through.

If there were more to the walking, then it might pass as an atmospheric experience, but there's just nothing there. Features in the world repeat (is the game set in Venice? Because there are blocking canals everywhere), there's no intentionality to finding her way, and the areas are strangely unpopulated. The few times she does meet someone, there's no interaction—only one person in the game even acknowledges her presence! It's more than a little bizarre since it seems that if someone saw a blind girl stumbling around, they would probably go over to see if she needed some assistance.

I also found it hard to buy into Rae as a blind girl in general. She doesn't walk with arms or hands outstretched to prevent herself from crashing into things. Despite setting out into strange woods and an unfamiliar town, she only trips twice at scripted moments. She's also nonsensically afraid of things— when she encounters a group of squawking seagulls, it's as impassable as a brick wall. The same goes for a man digging a hole. All he's doing is digging, and it scares her so much that she can't pass, can't ask him for help, and can't even ask him to stop shoveling. Very little of this stuff makes any sense.

Even worse, the walking is bad mechanically. Rae's walking speed is incredibly, painfully, torturously slow, and she gets hung up on corners and edges. Every time I'd hit a dead end while looking for the way ahead, I would gnash my teeth at the idea of having to retrace my steps while watching Rae move as slowly as a person can walk without actually going backwards.

Despite the fact that the game is only two or three hours long (depending on how lost a player gets) I found it to be absolutely unbearable. I became so bored with the lack of interesting things to see and do that I literally put a rubber band on my controller's left stick to keep her moving for long stretches of time, which gives an idea of how interactive Beyond Eyes is. I badly wanted to quit after the first thirty minutes, but I was determined to see where the story was going. Naturally, the ending was a total non-event and not worth the time and aggravation.

As credits roll, a brief message comes up which suggests that Beyond Eyes was somehow inspired by real events or real people. I don't know the specifics, but clearly something behind it was so moving that Tiger & Squid felt a game should be made. I can respect that. At the same time, anyone creating a game needs to understand how it will be received by someone who hasn't had that same experience. I suspect that Beyond Eyes would have fared better as an animated short or a twenty-minute expression piece instead of the three-hour game that it's being sold as. As it stands, I can't recommend it to anyone. Take a few glimpses of the lush screenshots maybe, but don't even consider playing it. Rating: 1 out of 10


Disclosures: This game was obtained via publisher and reviewed on the PS4. Approximately 3 hours of play were devoted to the single-player mode, and the game was completed. There are no multiplayer modes.

Parents: According to the ESRB, this game contains: No descriptors. There's nothing questionable at all in the game. It's safe for all ages.

Deaf & Hard of Hearing: Despite the fact that the main character is blind, sound doesn't really play a factor. There's almost no dialogue in the game, and what little there is comes subtitled. It's accessible.

What a shame – there was potential to take an interesting look at the struggles the blind have to deal with, but it ended up as another banal walking simulator.

Thanks brad. I can respect a game portraying something so unique like a disability of blindness, BUT, it seems to me that this game was inspired by another insidious condition, and that is the trend of getting value for money which is usually at the ‘expense’ of the game, or the devs vision. It seems the devs wanted to charge a certain amount of money for this work, and that comes with an expectation of play length of total game time. But that obsession of perceived value for money, seemed to only really wreck the honourable intent of their message.… Read more »