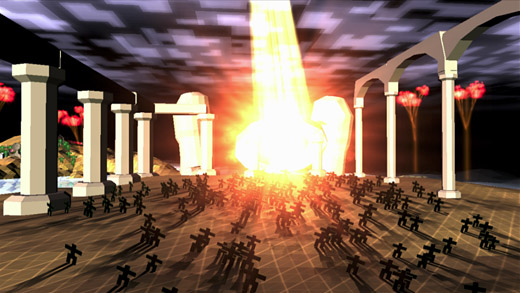 First up tonight, a funny little video about the BioShock 2 launch from my friend Chris Vandergaag over at The Side Mission. There are a few pretty good chuckles in there, so check it out if you have a chance.

In other news, I'm still between official reviews right now so I've got a little time to play things just for the enjoyment of it. It's kind of a treat. As a big fan of Indigo Prophecy, I plan to hit Heavy Rain along with the rest of the free world as soon as my copy arrives, but in the meantime I’m not committing to anything too involved or lengthy.

On the same topic, if you read the last entry, you'd see that I started Dead Space: Extraction on the Wii. I finished that up yesterday, and overall enjoyed it quite a bit. The graphics were very respectable (wait for it…) FOR THE WII and many of the locations were instantly recognizable from the first game. I really got the feeling of being in the same world despite the shift in genre and console. I was also honestly shocked at how much voice acting there was, and how it felt deeper than the average rail-shooter. I liked the things it added to the genre—actually having a real story, primarily among them. (It was MUCH better than Dead Space proper.)

As a neat bonus, the disc also included the six-issue Dead Space comic book series that came out a while ago, redone in digital comic format. Having played through both games in the Dead Space series, I would recommend new players to take on Extraction first. It does a much better job of giving the player a mental context within which to work, and sets the stage beautifully for the overlong, tedious action of its big brother.

(Incidentally, I'm strongly tempted to write a review for it, but I need to keep reminding myself that I'm not on the clock…)

Having wrapped that, I felt like I was long past due to get back to the download side of things after having spent so much time with big-budget releases lately. Checking out the action on XBLA, it was a tossup between The Misadventures of P.B. Winterbottom and Darwinia+… Although I liked the art style and tone of Winterbottom, the demo suggested to me that I would be in for annoyance or aggravation after getting past the first few levels. Something about setting up all those clones and timing things right struck me as something that would likely be more trouble than it was worth, so I veered the other way and put my MS points towards Darwinia+ instead. After getting through the first three levels, I haven't regretted the choice.

Although Darwinia has been out for PC for something like five years or so, I've never had any experience with it, nor heard anyone talk about it except for brief mentions in passing. With that timeline in mind, it gives a little context towards the game itself and the straightforward nature of its action.

Strongly reminiscent of Tron in many ways, the game takes place inside a virtual reality world populated by little green stick figures called (surprise!) Darwinians. They are under attack by nasty red virus programs which take the shape of different sorts of creatures that need to be killed with extreme prejudice. Each level (so far, anyway) starts off with the player guiding a group of commando programs into the landscape, shooting and grenading enemies into pixels. After clearing out each area, helper programs will gather up resources and convert them into new Darwinians that need to be herded towards an exit or other specified area.

The play itself seems quite straightforward so far as I've already said, but I think the strong point of this title is certainly its aesthetic and design. Things are constructed from neon light and obvious polygon surfaces, and all the characters are wonderfully blocky and simple—and I do mean that in a positive way. It's actually fairly relaxing to cruise through the environment and blast these phishing and spambot programs, taking in the surreal sights at the same time. Honestly, I almost expect a lightcycle to come blazing onto the screen with a glowing trail behind it, or to see a huge Recognizer float in and smash something.

My last bit of game talk for the night has to do with a recently-released 360 title called Deadly Premonition. I don't know much about it, but there have been a few videos circulating the web which are both incredibly bad and incredibly brilliant at the same time.

Although I have yet to actually lay hands on it, I have a sneaking suspicion that it may be headed towards cult status. Apparently copies are somewhat hard to find due to the complete lack of advertising and complete lack of mindshare. Its $20 budget price point probably didn't encourage retailers to order many copies, either. It may be good or it may be a waste of time, but what I've seen so far has been very intrigued and this might be one of those games that you want to track down just to say that you own it.

what he said, and more of it

if you liked Indigo Prophecy, then you are going to love Heavy Rain. I just finished up my first play-through and thought it was brilliant.

I actually prefer the multiplayer component of Multiwinia over the singleplayer in Darwinia, it’s more strategic with a lot of the micromanagement removed. It can be tough to find players though.