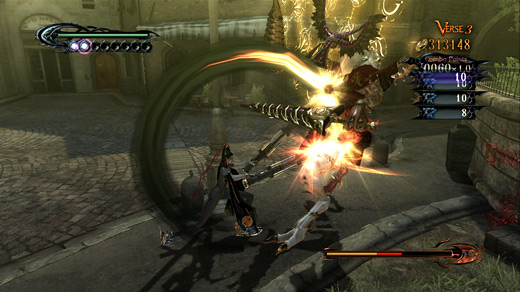 HIGH The dance number after the credits roll.

LOW The "story" is a bloated, empty mess of half-realized nonsense.

WTF Why is Jeanne glowing there?

, I found myself in agreement with his criticisms, yet felt he went too easy when giving the score. I don't generally dwell on the numbers at the end of a write-up, but this is one instance when a rating bothered me enough to say something. I don't mean to single Gene out, though. He was hardly alone in giving the title high marks, but even so, I can't wrap my head around the overly-warm welcome Bayonetta received in 2010, not to mention the regard many critics still have for it today.

Before getting into what's wrong, let me start with what's right—I do think the main character is devilishly cool, and there's no denying the appeal she brings. Out of all the new IPs and characters introduced in the last few years, Bayonetta is one of the most well-known in serious gamer circles. The skin-tight outfit, the naughty librarian glasses, the guns strapped to her heels… her design is strong, and I would imagine that a lot of players out there (myself included) want to like her, and by extension, her game.

However, very few titles can get by on style alone if the supporting elements falter. Bayonetta must be one of the lucky ones, though. Don't ask me how, but it not only managed to skate by the usual critical slings and arrows unscathed, it was celebrated when it arrived. As for me, once I got past the appeal of the character, I found Platinum's work to be quite lacking and wildly inconsistent in all respects.

Take the combat, for example. For an action-heavy game like this one, I found that it was often surprisingly hard to follow what was happening. Sometimes it was due to some awkward camera angles or screen-filling special effects, and other instances could be attributed to combat that was impossible to parse thanks to a crush of characters in a scuffle. I frequently felt like the only way to get through some of the messier encounters was to apply a "spray and pray" philosophy and hope that things turned out all right—it's hardly optimal. 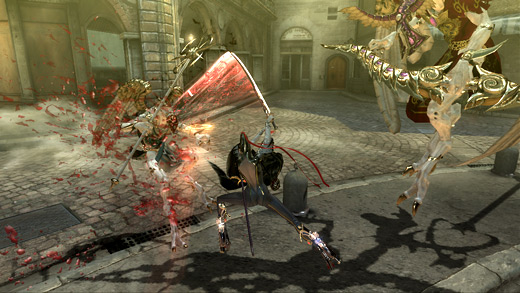 Compounding this lack of visual clarity is that the game is built on a dial-a-combo system where the majority of moves are implemented by hitting punch or kick buttons in preset sequences. For example, YYYB is a different result than YYY (pause) B, which is again, a different result than YYYYB. It's simple enough, but I found it difficult to remember exactly how many times I needed to press a given button in order to get the specific attack I wanted in a pinch. I don't doubt that there's depth here for those who want to dig, but it generally felt like mash-happy imprecision.

The rest of the game feels vague and unfinished, with a clutch of irritating and poorly-designed elements. Some examples? Cut-scenes go back and forth between full-motion and a strange stop-motion style, some cut-scenes end with the player taking unavoidable damage as they transition back into gameplay, a few instant-death QTEs pop up out of nowhere, the forgettable crafting system feels like it doesn't belong, tedious vehicle segments drag on for days, and the smattering of alternate weapons feel randomly tossed-in. Furthermore, while the adventure can finished in a standard amount of time for an actioner, it manages to feel three times longer than it needs to be thanks to dull levels lacking coherence or narrative quality.

Speaking of narrative, Bayonetta sports one of the most unfocused and inconsequential plots I've been subjected to in recent memory. I just don't understand what the writers were going for. Things are somber and serious one moment, ridiculously farcical the next. Either direction would've been fine, but it's impossible to connect with anything as the two sides struggle against each other, and neither makes much headway.

It's utterly astonishing to me that a game which takes so much time on so many drawn-out cut-scenes manages to completely avoid any dramatic tension, any depth to the characters, or any feeling of progression. Being over the top with flash and bombast is great, but there doesn't seem to be any method to the madness, and there's certainly no substance beneath the surface. Ironically enough, I had several fans of the game tell me to just skip the cut-scenes, and after having sat through the entire tale, I'd have to say that's very good advice.

I can appreciate that Hideki Kamiya wanted to one-up his previous work on Devil May Cry, but Bayonetta

is a mess. It's as though the developers at Platinum dreamed up this dynamite protagonist and then went full steam ahead into production without anything besides striking visuals and some ideas for combat. They may have made hit a few solid notes in those areas, but the experience as a whole is painfully, embarrassingly undercooked. Rating: 4.5 out of 10.


Disclosures: This game was obtained via retail store and reviewed on the Xbox 360. Approximately nine hours of play were devoted to the single-player mode, and the game was completed. There are no multiplayer modes.

I have the same complaint about darksiders. The original Darksiders was average to mediocre all around and Darksiders 2 just dropped the ball completely with it’s awfully craptastic pacing. Darksiders was meant to be an action game in the likes of Devil may cry / God of war, but they ended up casualizing the crap out of it and it made playing the game tedious because there was no real challenge. The story in the first game while not bad was nowhere near great and in DS2 the story telling just fell apart. The whole game just felt rushed and… Read more »

Bayonetta is one of only two games where I used trophies as an excuse to keep playing. It’s just that good.

Also, you’re wrong for not agreeing with everybody else (obviously).