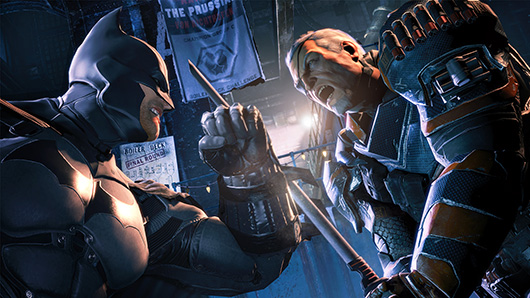 WTF why can’t I pummel Deadshot until he’s unconscious?!?

I’m sure that most players interested in Arkham Origins

have already been through Arkham City, and as a reviewer evaluating the game late (more on that below) I’m aware of complaints that they have too much in common. Apparently they share similar structures and themes, and many say that Origins is a repeat that lacks freshness. However, I’m in the minority that felt Arkham City was a mess. I tried playing multiple times in order to give it the fairest chance, and I never made it more than a few hours before quitting.

With this in mind, I approached Origins with trepidation, only to be pleasantly surprised. The beginning was well-paced and drew me in, the story intrigued, and it felt like the ‘proper’ sort of Batman I was craving after taking down the Joker in Asylum. Origins may be too close to its predecessor for some, but I actually consider it to be a corrective bat-mulligan. It didn’t take me long to forget that Arkham City ever existed.

For those unfamiliar with its premise, Origins is a prequel taking place after Bruce Wayne has become the Batman, but before he’s allied with Commissioner Gordon or met the foes who later populate his rogues’ gallery. Although he doesn’t seem green when solving crimes or beating down thugs, it’s interesting to see the Dark Knight forging an understanding with faithful butler Alfred, and approaching Gotham City as an outsider unknown to the populace. There are some great narrative beats here for fans of the character.

The writers also devise a fantastic premise for the adventure: villain Black Mask is tired of his illicit operations being disrupted, so he offers $50,000,000 to anyone who can take the Bat down. With such a sum on the line, a horde of assassins converge on the town, and they’re all out to collect. This sets the stage for a night full of tension and intrigue, and allows for lesser-knowns like Deathstroke, Shiva and Deadshot to make an appearance. I appreciate the Joker as much as the next nocturnal vigilante, but it’s great to see other foes get some screen time.

The attention paid to different villains was a treat, as was Origins’s emphasis on crime-solving. I loved descending on murder scenes to re-enact events with the Bat-computer and searching for clues.Batman is often billed as ‘the world’s greatest detective,’ so getting to actually detect something felt like a great fit. To be fair, the sequences aren’t terribly complex and largely run on autopilot, but adding some depth besides longer combos and more gadgets is a step in the right direction. Even better, some of the mysteries end up revealing the identities of the assassins loose in the city, suggesting that I’d actually uncovered vital information.

With those things clearly in the asset column, I’m of the opinion that an open-world Gotham does not offer significant value, and is a wrong direction for the series. The ‘cool’ factor of gliding from rooftop to rooftop is high, but once that novelty wears off, too much of the game is simple traversal. Fast-travel points can be unlocked (and boy, did I use them) but a large area that exists for the sake of being large is no longer new or exciting; it’s an annoyance to get through, rather than something that’s truly relevant to the experience.

Although Origins’s open world might be spun by some as more of a preference than a criticism, I can also point a finger at problems clearly rooted in flawed design and execution.

If nothing else, the Arkham games have been known for smooth combat, so to see that lost with ground attacks that don’t always work and two-man counterstrikes that consistently fail is more than a little eyebrow-raising. I was also put off by much of the interior architecture. Since the game doesn’t offer pathfinding assistance, it was easy to get turned around inside buildings, and I would often spend a few minutes trying to get my bearings. When asked to re-enter some of these locations for sidequests later, getting lost and frustrated was common.

Those things were bothersome, but a more serious issue is that Origins is as buggy as a beehive. Although it’s received patches since, I experienced falling through the world a number of times, and was unable to unlock one of the fast-travel areas. As for this review being so late, I spent a couple of weeks with Origins on a shelf because a showstopping bug prevented me from finishing the game until the game’s rep found me a janky workaround. I don’t know how many unfortunate tech hiccups similar to these still exist, but this project contains far too many of them.

Putting Origins out for retail without the burrs filed down was a real mistake, not only because some players might not be able to patch it into being playable, but because there’s a lot to like once things smooth out. Although I still prefer it to City, I can certainly understand how some might be soured by the technical roughness and bail before trying the shifts in formula that make it so much more palatable. For players like me who felt that City went astray, Origins

is definitely worthy of attention… Just make sure it’s fully patched before starting. Rating: 6.5 out of 10


Disclosures: This game was obtained via publisher and reviewed on the PS3. Approximately 14 hours of play were devoted to the single-player mode, and the game was completed. No time was spent in multiplayer modes.

Parents: According to the ESRB, this game contains: blood, drug reference, language, mild suggestive themes, and violence. I’m happy to report that expletive usage has been greatly toned down since the last game. There are still instances, but it’s nowhere near the excessive bitch-calling players were subjected to in City. Some of the criminals deal in drugs, so expect that sort of content, and of course, our hero has no qualms about putting the smack down on every bad guy in town. It’s a little on the dark side, but the level of violence is appropriate for a superhero game of this sort.

Deaf & Hard of Hearing: all dialogue is subtitled, and because of the camera’s position and the way attacks are telegraphed with visual symbols, I found the game to be quite accessible without the use of sound. There were a few instances where enemy positions were given away by noises or ambient speech, but none of them were significant in any way.

I think an open-world Batman can work, but Origins shoots itself in the foot by sticking that big, long bridge in the middle. As a way to partially recycle the content of City that makes sense, but in the context of the open world it may as well be a flashing neon sign that says “USE FAST TRAVEL”. Once you’re using fast travel regularly, the mental structure of the game world breaks down and the map takes pride of place over the world itself. There are other pointless obstructions, too (the power plant next to Wonder Square), but the bridge… Read more »